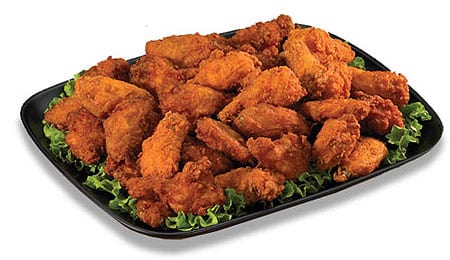 If the NFL lockout ends within a month, there will be chicken wings for all!

The NFL lockout is now into its fourth month (Monday was Day 100) with no obvious end in sight.

Football fans across the land are praying that Tuesday’s owners meeting offers us some glint of hope that a settlement is coming soon.

The session is so in-depth that it is expected to take over a full day, and while the owners won’t formally be voting, perhaps they can at least emerge with some form of agreement on the direction of the negotiations.

The purpose of Tuesday’s session is to bring all 32 club owners up to speed on the labour discussions and provide them an opportunity to ask any questions they may have.

Here’s a question for you: when the fuck will this damn thing be over? More importantly, are we going to have a 2011 NFL season?

This marks the longest stoppage in league history, but until games start being cancelled, no one really cares, I suppose.

Still, with a few owners reportedly not pleased about the direction of the negotiations, there is obviously plenty of work to be done until we get them all on the same page, never mind getting the union and ownership on the same page. It’s pretty hard to reach an agreement with the other side, when one side can’t even agree on everything.

Businesses that depend on football to draw in big crowds on Sundays are starting to getting antsy.

Buffalo Wild Wings, for instance, started a “Save Our Season” petition, writing an open letter to owners and the union and getting almost 17,000 people to sign the petition.

If an agreement is reached by July 20, Buffalo Wild Wings will give free wings to everyone that signed the petition.
Let’s just hope the official wing flavour of the 2011 NFL season does not turn out to be suicide.

By RotoRob
This entry was posted on Tuesday, June 21st, 2011 at 9:49 am and is filed under FOOTBALL, Labour issues, RotoRob. You can follow any responses to this entry through the RSS 2.0 feed. You can leave a response, or trackback from your own site.