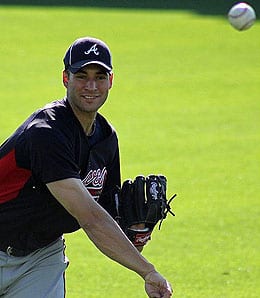 Brandon Beachy is expected to return from the DL this week.

In honour of Father’s Day Billy Butler has received the day off to be followed by Vladimir Guerrero and probably David Ortiz heading into this week’s play. It’s nice to see that MLB truly does care. Big Papi, one of the hottest hitters in the game, will probably be riding the pine at the end of this week, but, hell, it’s for the good of the game. Bud Selig wouldn’t lie to us, would he? It’s one of those necessary evils in our game, but one that can’t be ignored, so spend some extra time this weekend checking your lineups carefully as there will be opportunities to be both lost and gained in the coming week. Have a great Father’s Day and without further ado, let’s give this weeks waiver wire the once over.

Dustin Ackley, 2B, Seattle Mariners (CBS: 59 per cent owned, Yahoo!: 28 per cent): Ackley, the second overall pick in the 2009 First-Year Player Draft, was recalled Friday and slugged his first homer Saturday against the Phillies. In 271 at-bats at Triple-A Tacoma, he slugged nine homers, drove in 35 runs, swiped seven bags, and hit for a .303 BA. What is even more impressive is that he drew 55 walks against 38 strikeouts. The kid can definitely hit so cough up some of that FAAB you’ve been saving and upgrade your middle-infield in all formats this weekend.

Jeff Karstens, SP, Pittsburgh Pirates (CBS: 16 per cent owned, Yahoo!: 15 per cent): The Pirates are still playing solid baseball and flirting with the .500 mark as we creep towards the end of June. A rotation that was considered abhorrent at best heading into the 2011 season is one of the keys to their success and Karstens is currently leading that group in the Steel City. In 71 IP, he’s allowed 65 hits and 12 walks with 47 strikeouts, a 2.66 ERA and 1.08 WHIP to show for his efforts. He has been prone to the gopher ball, allowing 10 so far with seven of the 11 runs charged to him in May courtesy of the long ball, so he has to keep the ball down and avoid walks to be successful. In 20 2/3 IP over three starts in June, Karstens is doing just that, allowing one walk and no homers. Are these numbers sustainable? Probably not, but as long as he’s producing at these levels he’s a must own in all formats.

Brandon Beachy, SP, Atlanta Braves (CBS: 66 per cent owned, Yahoo!: 24 per cent): In what was likely his final rehab start at Triple-A Gwinnett, on Thursday Beachy surrendered one run in five innings with eight strikeouts. He’s returning to the Braves rotation just in time as Tommy Hanson has hit the DL with shoulder issues and Randall Delgado proved he wasn’t quite ready. Prior to the oblique injury Beachy suffered in mid-May, in 44 1/3 IP he allowed 36 hits and 12 walks with 46 strikeouts, while holding the opposition to a .221 BAA. Find a home for him on your roster in all formats.

David Freese, 3B, St. Louis Cardinals (CBS: 37 per cent owned, Yahoo!: 26 per cent): Freese is ahead of schedule in his recovery from the broken hand he suffered back at the beginning of May and is heading out on a rehab stint at Triple-A Memphis this week. He could be returning to the Cards lineup as early as the last week of June. In 87 at-bats prior to the injury, Freese had two homers, 14 RBI, and an exceptional .356 BA. For those that had visions of Albert Pujols gaining eligibility at the hot corner that time is coming to a close.

Mike Leake, SP, Cincinnati Reds (CBS: 43 per cent owned, Yahoo!: 18 per cent): Very quietly, Leake is starting to err… steal his way back into prominence for the Reds. In five starts since May 27, he’s allowed three or less earned runs and has gone at least six innings in each outing. Leake is now up to six wins on the season and his performance could force Homer Bailey into a bullpen role when he returns from his most recent stint on the DL.

Hideki Matsui, DH, Oakland Athletics (CBS: 14 per cent owned, Yahoo!: 7 per cent): He’s been a huge disappointment in Oakland so far, but in the past couple of weeks we’ve seen some semblance of the east coast Godzilla. In his past 10 games he’s hitting .321 BA with three homers and nine RBI and should find his way onto rosters in deep and AL-only formats immediately.

Nick Blackburn, SP, Minnesota Twins (CBS: 31 per cent owned, Yahoo!: 10 per cent): Blackburn allows too many hits and doesn’t strike out enough batters, but despite his many deficiencies has been quietly producing for a Twins’ team that is finally turning things around. He is not for the faint of heart, but the win potential alone merits consideration in AL-only leagues.

Tsuyoshi Nishioka, 2B, Minnesota Twins (CBS: 32 per cent owned, Yahoo!: 18 per cent): He still has a lot to prove, but he’s back in the lineup after recovering from the broken leg that cost him all but the first six games of the season. If he can show some semblance of the player that sported a .423 OBP last year in Japan he could find his way into the two-hole in a Twins lineup that is finally returning to health. Note that Nishioka has shifted to SS since his return, so depending on your league eligibility rules, he will soon qualify at that position.

Roger Bernadina, OF, Washington Nationals (CBS: 8 per cent owned, Yahoo!: 2 per cent): Bernadina has now started five consecutive games, batting .400, scoring three runs and swiping a base over that stretch. Rick Ankiel might be out of a job before he’s healthy enough to return to the streaking Nats’ lineup.

Junichi Tazawa, SP, Boston Red Sox (CBS: 1 per cent owned, Yahoo!: 0 per cent): Tazawa is currently rehabbing from last year’s Tommy John surgery and after getting pummeled in his first two starts to the tune of 12 earned runs in 7 1/3 IP at High-A, he’s now reeled off 12 IP with only one earned run allowing while fanning 10. His velocity is starting to return, so don’t forget about him in Dynasty formats.

Zach Stewart, SP, Toronto Blue Jays (CBS: 3 per cent owned, Yahoo!: 0 per cent): The Jays finally made a move last week and called up 24-year-old Stewart to replace the struggling (and since demoted) Kyle Drabek. In his first start Thursday against the Orioles, Stewart pitched seven solid innings in a no-decision, allowing seven hits, one walk and two earned runs while striking out four. That performance has earned him another start and with Drabek’s visit to the minors possibly a lengthy stay, Stewart should be on the radar in AL-only leagues.

Eduardo Nunez, 3B/SS, New York Yankees (CBS: 8 per cent owned, Yahoo!: 2 per cent): Nunez is a short-term fix as he fills in for the injured Derek Jeter, but in the power-laden Yankees’ lineup he’s a player that could temporarily fill a hole and provide value in deep and AL-only leagues.

Andrew Miller, SP, Boston Red Sox (CBS: 20 per cent owned, Yahoo!: 2 per cent): It’s now confirmed that the Red Sox will bring up Miller to start Monday against the anemic Padre offense. He could be in line for a second start against the Pirates later in the week. Could there be a better matchup for streaming pitching in a H2H format? You have to love interleague play.

By Tim McLeod
This entry was posted on Sunday, June 19th, 2011 at 11:50 am and is filed under BASEBALL, The Wire Troll, Tim McLeod. You can follow any responses to this entry through the RSS 2.0 feed. You can leave a response, or trackback from your own site.