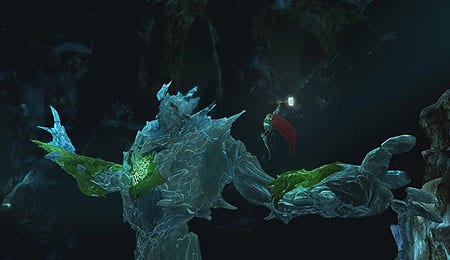 It seems somehow appropriate that three of the words in Thor: God of Thunder are nearly identical to another established gaming franchise — one which developer Liquid Entertainment clearly modeled this game’s combat after. Unfortunately, the similarities pretty much end there as Thor’s adventures in Asgard can’t touch the presentation values or polished gameplay seen from Ares’ successor.

Taking a page from Kratos’ playbook, Thor does battle with three basic attacks: melee, magic and grapple. Within that you’ll have a number of combos, usually consisting of several melee strikes followed by a magical punctuation. Thor can also jump, block, dash and throw his hammer (Mjolnir) like a boomerang. It’s fairly well laid out and offers a number of options when deciding how you want to dispatch your enemies.

Where things unravel is with the momentary disconnect between when you press a button and when Thor takes action. This lag interrupts combos, ruins quick time events, makes parrying and reflecting attacks an exercise in futility and causes you to miss jumps you should make in your sleep. Had the game not featured an auto recover, which doesn’t allow Thor to sustain fall damage, there’s no telling if my controller would’ve survived the experience.

Mediocrity, thy name is Thor. Even with some decent locations and legitimately cool looking bosses, Thor: God of Thunder never pushes the envelope visually in any way. Thor has a clumsy stiffness about him that makes it so most of his moves never look as devastating as they should — the exception to the rule being some fairly vicious grapple maneuvers. Textures can be slow to load and there are numerous instances throughout where the frame rate is reduced to a virtual crawl.

This being a movie tie-in, some of the actors from the film reprise their roles here, including Chris Hemsworth (Thor) and Tom Hiddleston (Loki). Their inclusion creates some continuity between the two ventures, and the voice acting itself is decent enough. Sound effects and background music are okay, though they never deliver beyond that designation.

Lead Thor comic book author Matt Fraction served as a story consultant on Thor: God of Thunder, which is essentially a prequel/side story to the theatrical release. That sounds impressive, but in reality there isn’t that much story being told to begin with. Basically, Thor’s devious brother Loki has formulated a plan to make himself look like a hero by tricking the God of Thunder into releasing an ancient evil and then vanquishing it without Thor’s aid.

Of course, things don’t go as planned, and it’s now up to the son of Odin to return to his homeland before it’s razed to the ground. That’s easier said than done as Thor must battle through several foreign worlds and defeat countless foes to aid Asgard in its time of need.

As I’ve already alluded to, Thor: God of Thunder borrows heavily from the God of War series with similar combo-based attacks, timed button presses during grapples and so on. And although the frequent (and oft times lengthy) battles can get repetitive after a while, there remains a certain primal satisfaction in annihilating smaller enemies and chopping down larger ones.

Felled baddies drop coloured symbols that replenish Thor’s health and Odinforce (read: magic) as well as granting him valour points to upgrade his abilities. This wheel of branching pathways is like a simplified version of what was seen in FFXIII, albeit with considerably fewer options. By spending your valour points you can increase your maximum health/magic, augment combos and add more destructive power to your array of magic.

While those things are at least reasonably enjoyable, Thor: God of Thunder is also littered with a number of significant issues that hamper your attempts at having fun. I already touched on the controls, but they pale in comparison to the game’s camera. Put bluntly, it’s terrible. Throughout the game I found myself desperately trying to keep enemies in view or prevent it from getting so close behind me that I couldn’t see what I was doing — an issue most prevalent when fighting the game’s larger creatures.

Perhaps even more debilitating than the camera is the wonky hit detection. I lost count of the number of times I was in midair performing a combo only to have it interrupted by an enemy slashing the ground below me… or at least it appeared to be below me. However, the game constantly registered that (and a dozen other equally unfair attacks) as a hit. It’s bad enough that I rarely attempted to evade or block attacks after a while, instead relying on my own all-out assault to advance.

And then, there are the boss fights. First of all, know that there are a lot of boss battles here, which in theory is a good thing. Unfortunately, in practice it’s another matter. Part of the reason is that the game’s two biggest flaws (poor camera and collision detection) are at their worst when dealing with the massive bosses. Another part is that you’ll end up fighting the exact same boss two and even three times, which effectively takes all the excitement out of it.

All told you’ll battle through 14 chapters; including one the developer apparently neglected to tell gamers they were playing (there is literally no Chapter 12). In terms of replay value, once you finish you can play through again on another difficulty setting with all unlocked abilities and collectibles carrying forward. The game also includes a fairly comprehensive list of moves to execute. Known as “feats,” these can be tracked from the pause menu.

While not devoid of a certain simplistic hack n’ slash charm, Thor: God of Thunder suffers from too many self-inflicted wounds.

By Herija Green
This entry was posted on Friday, June 10th, 2011 at 11:43 am and is filed under Herija Green, Video Game Reviews. You can follow any responses to this entry through the RSS 2.0 feed. You can skip to the end and leave a response. Pinging is currently not allowed.