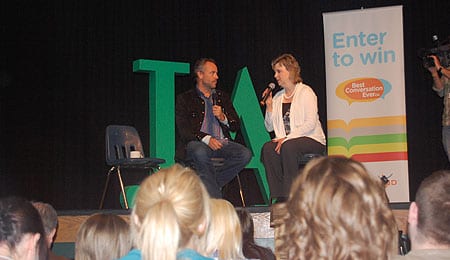 Barbara McKinnon (right) had her dream conversation with Brett Wilson.

The first WIND Mobile Best Conversation Ever talk happened on May 27, when high school teacher Barbara McKinnon of Moose Jaw, Saskatchewan chatted with Brett Wilson, entrepreneur and one of the stars from the television show Dragon’s Den. As part of the contest, the celebrities each get to choose a charity to receive a $100,000 donation from WIND and Wilson selected Outward Bound for Veterans, and he specifically wanted the True Patriot Love Foundation be the primary program supported.

Each judge was allowed to ask the winner a few questions about their conversation. Here are McKinnon’s responses to my questions:

RR: What surprised you most about Brett?

BM: He lied to me! He tweeted about his early flight back to Calgary, noon meeting, etc. It’s funny! [Editorial note: This refers to the fact that she originally believed the conversation would happen through video conferencing, yet they were just psyching her out; see the video below to see how they pulled it off.]

RR: Is there a question you would have liked to ask him but didn’t?

BM: Two, actually… What does your first initial, “W,” stand for? And… If you could talk to anyone in the world, who would it be? [Editorial note: Rumours suggest that the W stands for Winnie, but these are unsubstantiated. As for the second question, the answer is obvious, isn’t it? Clearly, Wilson yearns to wrap with RotoRob.]

RR: What was the highlight of your conversation with him?

BM: Meeting him in person! It doesn’t get any better than that! [Editorial note: Um, I think pizza and beer served by scantily clad ladies would have made it better, but maybe that’s just me.]

RR: Did this conversation change your life at all? If so, how?

BM: This face-to-face encounter with W. Brett Wilson, I would have to say, is the highlight of my 26-year teaching career. The experience reminded me that you can’t have something if you don’t try… When I entered the Best Conversation Ever contest, I never imagined winning. [Editorial note: You mean summer vacations aren’t the best thing about being a teacher? I have so much to learn…]

BM: Edmonton Oilers. [Editorial note: Well, my condolences to you. I guess you really did deserve to win something if you’ve been stuck rooting for the Oilers.]

Finally, here’s a video of the gag they played on Barbara, who was expecting the interview with Brett to be done via video conference, but he was there in her school the whole time.

By RotoRob
This entry was posted on Saturday, June 4th, 2011 at 2:47 pm and is filed under Contests, RotoRob. You can follow any responses to this entry through the RSS 2.0 feed. You can leave a response, or trackback from your own site.