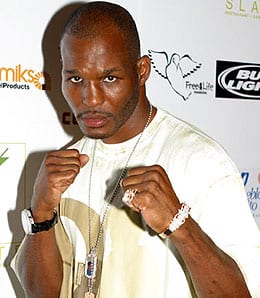 Bernard Hopkins had some fighting words for Donovan McNabb.

You’ve got to love the offseason — especially this one, with such little real football news to discuss — if for no other reason than the media is so desperate for news content, that crazy ass things become headline fodder.

Take boxer Bernard Hopkins, a noted Donovan McNabb hater. Hopkins is currently in Philly to train for a fight in a couple of weeks, and on Tuesday he had the media out come watch him prepare.

Hopkins then gave the Philadelphia Daily News the following gem about McNabb: “Forget this,” he said while pointing to his own skin. “He’s got a suntan. That’s all.”

The paper contacted McNabb’s publicist, but was told that there would be no comment from the McNabb camp. I guess that’s not much of a surprise. What the hell could McNabb say about this that wouldn’t just cause this thing to spiral out of control?

By RotoRob
This entry was posted on Wednesday, May 11th, 2011 at 1:44 pm and is filed under FOOTBALL, NFL Today, RotoRob. You can follow any responses to this entry through the RSS 2.0 feed. You can leave a response, or trackback from your own site.