Mark Lowe Working the Kinks out at Triple-A 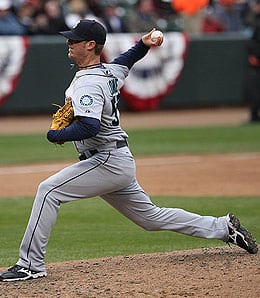 Mark Lowe should get another shot in the Ranger pen soon.

Today we’re going to turn our attention to the bullpen, checking in on a few ex-Mariner relievers around the game.

After missing most of 2010 and getting rocked early this season, reliever Mark Lowe was sent back to Triple-A by the Texas Rangers a couple of weeks ago. They felt he needed to shake off the rust in an environment where he wouldn’t hurt the team’s chances of success.

Well, so far, he’s getting the job done.

Lowe has worked three straight scoreless outings at Round Rock, surrendering just one hit in 4 1/3 IP, striking out six and – most importantly – walking none. In six appearances for the team, he’s gone 1-0 with a 2.89 ERA and a 13/4 K/BB ratio in 9 1/3 IP. Opponents are batting just .200 against Lowe.

Texas says it hasn’t forgotten about him, so you can rest assured if Lowe keeps excelling, he’ll get another shot in the bigs soon. The righty was one of the AL’s top set-up men in 2009 and, considering the struggles of the Rangers’ pen (22nd in ERA), he has a chance to emerge with value in leagues that tracks holds, so you’ll definitely want to keep your eye on him once Lowe makes it back.

Another former Mariner reliever, Sean Green, could soon be joining Lowe in Triple-A the way things are going so far this season. His first season in Milwaukee has gotten off to a rough start, but his stats have been skewed somewhat by back-to-back rough outings a couple of weeks ago. He’s only pitched twice in the last 11 days, but he tossed shutout ball in both appearances. However, Green’s strikeout rate is at its lowest ever and his command has been rancid. He’s never had good command in the majors, but Green did show some potential at a set-up man a couple of years ago. Now 32, Green is unlikely to ever approach marginal Fantasy value again.

Back in Texas, Arthur Rhodes got a bit of Fantasy attention when it looked like he would earn saves while Ranger closer Neftali Feliz was out. Rhodes did earn one (and also blew one), but Darren Oliver proved to be the better option, and now that Feliz is on the comeback trail (he could be back Friday, pending his showing at Double-A Wednesday), Rhodes is finding his way back onto the wire in most leagues.

Still, Rhodes could be useful in deeper AL-only leagues and certainly in formats that reward holds. What worries me – and bear in mind it’s early, so the sample sizes are very small – is his seriously reduced K rate.

Rhodes is 41 now, and while he’s coming off a wonderful season with the Reds, he experienced a decrease in velocity last year, and the drop off this year has been even more pronounced (from 91.3 mph to 89.5 mph). He’s been going to his slider and even his changeup more often this season, throwing less fastballs than normal.

Look, the old dude had an amazing career, but if he can’t throw his fastball by hitters anymore, the end is coming soon.

By RotoRob
This entry was posted on Wednesday, May 4th, 2011 at 10:35 am and is filed under BASEBALL, Fantasy Notes, RotoRob. You can follow any responses to this entry through the RSS 2.0 feed. You can leave a response, or trackback from your own site.