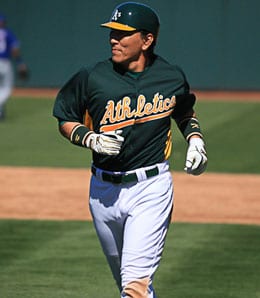 Hideki Matsui is thawing from his chilly start.

Billy Beane’s Oakland A’s have won two straight — which constitutes a hot streak in the AL West, where everyone has gone cold in the past couple of days – and by taking three of four from the Rangers, suddenly find themselves just a game back of co-leaders Texas and Los Angeles. The Wild West, indeed!

Well, he hasn’t exactly supplied the impact bat the A’s were looking for, but Hideki Matsui is finally starting to produce with three RBI in the past two games, one coming on a dinger Monday for the first walk-off homer of the season for the A’s. If you need a stick for your AL-only team, he’s worth a look.

Meanwhile, the Rangers sure have floundered after getting off to that amazing 9-1 start. They’re 7-12 since, and the series loss against the A’s leaves them with six defeats in the past eight.

Fortunately, the team is starting to get good news about some of its walking wounded. Starter Tommy Hunter and closer Neftali Feliz will start rehab assignments on Wednesday at Double-A. Feliz could be back with Texas on Friday, and Hunter should be ready to return after a couple of starts. Outfielder Josh Hamilton believes he’s ahead of schedule, so he could be back before the end of the month and Brandon Webb is slowly regaining strength, and he could be a rotation candidate around the beginning of June.

Madison Bumgarner needs to call his lawyer and get added to John Danks’ lack of support case. It could turn into a class action suit yet. Dustin Moseley, Jeremy Guthrie and Tim Stauffer probably want in on this action as well. Bumgarner sure didn’t deserve any wins in his first few starts, but he’s been phenomenal his last couple of times out, but has jack squat to show for it.

Adam LaRoche got a day off Monday to ruminate over his 1-for-23 skid. He’s winding up on the wire in plenty of mixed leagues, and who can blame his owners given the abundance of options at first base? Just remember, kids: LaRoche is the king of all second-half players, so don’t forget about him once July rolls around.

There’s an incredible competition going on in the AL Central to determine the crappiest team. What a race! The Royals went into the tank after their awesome start, but have since righting the ship. The Tigers have dropped seven straight; the White Sox were in a 4-16 drought before beating Baltimore Monday to avoid a four-game sweep – at home; and the Twins have gone down in each of their last six games.

Jose Valverde (not that Detroit has had much of a chance to use him recently) has been one of the few things going well in Motown, but on Monday he allowed a tie-breaking single in the ninth and suffered his first loss of the season. Join the loser club, Jose! On the bright side, he’s quite well rested.

It’s still been about a week and a half since Mark Teixeira has managed a multi-hit game, but at least he’s snapped a six-game scoring drought with three runs in the past two games. He’s now scored 19 times in 25 games, good for eighth in the AL.

Braves’ shortstop Alex Gonzalez played the hero Monday night, delivering a 3-run double one night after spanking a two-run dinger. Gonzalez is probably worth owning in NL-only leagues. He’s hit in four straight games, scoring four runs in the past three games and driving in five in the past two. Jump on these hot streaks while you can, folks.

Meanwhile, Brewer starter Yovani Gallardo isn’t getting hot against anyone, even the Braves – a team he’s long dominated. The owner of a 3-0 mark with a 0.96 ERA in five career starts against the Braves before Monday, Gallardo was simply mauled by them, giving up nine hits, five runs, a homer and four walks in five innings.

What’s his dealio this season? Coming off a career-best 14 wins and a second straight 200-strikeout season in 2010, Gallardo is getting shell shocked in the early going this year. Take away his first two starts of the season and things look even uglier. There’s not much you can do as an owner except pray that he’s healthy and park his ass on your bench until he snaps out of whatever’s going on with him (apparently, there’s been talk that he’s not working fast enough on the mound). Well, whatever the situation is, it better turn around quick for his owners.

By RotoRob
This entry was posted on Tuesday, May 3rd, 2011 at 12:56 pm and is filed under BASEBALL, Fantasy Notes, RotoRob. You can follow any responses to this entry through the RSS 2.0 feed. You can leave a response, or trackback from your own site.