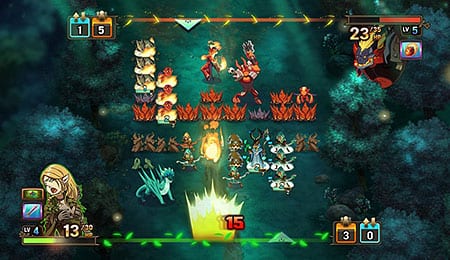 Awww! Look at all the adorable, little characters bringing destruction upon each other.

Ever since its very first release in 1986, the Might & Magic series has had a significant influence on gamers that are particularly passionate about the medieval-fantasy genre. Numerous titles from this series have been released for a wide variety of consoles and computer systems.

Now the franchise continues its tour de force with Ubisoft’s Might & Magic: Clash of Heroes. Originally released for the Nintendo DS, this game has been ported to Xbox Live and the PlayStation Network with further improvements to invite more potential fans to this phenomenon. It’s time to make way for these heroes as they come clashing into your home in all their high definition glory.

At first, the control layout can be difficult to grasp, but the in-game tutorial does a good job teaching the necessary basics and commands. Arranging and deleting units are executed with the “X” button and circle, respectively. To end your turn you use the square button while calling reinforcements involves the triggers. As you progress, you have the option to cast hero spells with the triangle button. Although the game lacks the ability to configure the buttons, getting used to them shouldn’t require much time.

What makes Might & Magic: Clash of Heroes shine is its amazingly crisp graphics. Its vibrant use of colours on screen makes everything seems clear and sharp. Thanks to the game’s HD treatment, the anime-style artwork and level design are absolutely gorgeous with the effects from spells showcasing the game’s true capabilities. Even the animations on the characters themselves are impressive as you can see them breathe while being stationary. Now that is a level of detail that deserves recognition!

Another shining moment for Might & Magic: Clash of Heroes is the updated sound. With the instrumental soundtrack playing in the background, the game makes sure that you are immersed in this medieval environment. If you have a surround sound system, the birds chirping in the background will make you turn your head to see if one is actually in your room. Everything from the music to the soothing voice of the narrator is responsible for the magical experience the game presents.

Might & Magic: Clash of Heroes focuses on five heroes embarking on a dangerous journey in an effort to save the world of Ashan from demonic chaos. For those that want to skip past the plot and dialogue, there is an option to do so without having to wait for the cut scenes to end. However, the five story-driven campaigns are entertaining enough to keep you on the edge of your seat as you face an adventure of epic proportions.

Unlike most typical role playing games, the world within Might & Magic: Clash of Heroes is not open for exploration, meaning that the characters can only move to designated nodes on the screen. As a result, the frustration of getting stuck in a mission, which is common in traditional RPGs, is practically eliminated.

During battles, you and your enemy must take turns arranging a set of character units on the grid. In order to deplete your enemy’s health, you must launch your attacks onto the enemy’s zone located at the top of screen by vertically aligning three of your units of the same colour. Aligning them horizontally will create a wall that temporarily shields you from attacks.

A wide range of character units are available to be used during battles, all of which vary in terms of abilities, strengths and weaknesses. Every time you defeat your enemy, you gain experience points and ultimately level up. This puzzle-based combat system is what contributes to the fun and enjoyment as you must determine what would be the most effective strategy to use along with the right mix of unit types.

What brings players coming back for more is the online leaderboard as it allows them to share their achievements in terms of level and XP with the world. Adding another replay incentive is the online and offline multiplayer support. In particular, up to four players can engage in either 1v1 or 2v2 matches through versus or co-op. This allows the game to be appreciated in different forms while the challenges associated with the puzzles and devising strategies remains the focus.

When you consider the astounding graphics, stellar sound quality and excellent puzzle gameplay combined with a lack of the annoying elements usually associated with a typical RPG, Might & Magic: Clash of Heroes is a steal at US$14.99 (1,200 MS points). Proceed with caution, though, as this game may bring tears of joy to your eyes from admiring its sheer beauty or playing excessively.

By Uma Smith
Tags: Might & Magic, Might & Magic: Clash of Heroes
This entry was posted on Friday, April 15th, 2011 at 1:31 pm and is filed under Uma Smith, Video Game Reviews. You can follow any responses to this entry through the RSS 2.0 feed. Both comments and pings are currently closed.