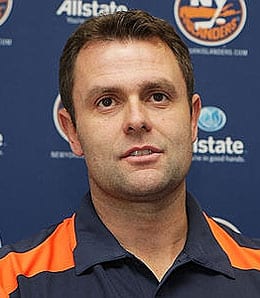 The Isles’ crappy start got Scott Gordon fired, but that didn’t help matters.

There’s no getting around the fact that the New York Islanders have been a huge disappointment this season. After bottoming out in 2008-09 with just 61 points, they improved to 79 points last season, buoying hopes that this young and talented squad was ready to make a run at a playoff spot in 2010-11.

Unfortunately, they got off to a slow start and really went into the tank in November, leading to the exodus of coach Scott Gordon. Jack Capuano took over, but the team continued to struggle and never really started to play well until after the All-Star break, at which point they were just playing out the string.

The fact that the Isles went 15-9-5 in February and March was promising, but definitely a classic case of too little, too late. Now they’re sputtering to the finish line, having dropped both games in April with their final two games coming against the Penguins and Flyers this weekend. It’s quite conceivable the Isles will wrap up their schedule with a four-game losing skid.

Long since eliminated from playoff contention, New York’s 3-2 loss to Boston Wednesday night made it five losses in the past six games. The Islanders aren’t exactly finishing on a high note, are they?

As we expected, goalie Rick DiPietro hasn’t been much of a factor lately, what with his incessant injuries and generally inconsistent play. But on Wednesday, he actually looked pretty strong, stopping 30 of 33 Bruin shots for his highest save percentage (.909) since late January. Yikes.

DiPietro has seen sporadic PT lately, and you can’t really blame the Isles, who need to look to the future. Besides, he’s now dropped seven of his last eight starts, so his play has made it an easy call.

The injury-prone netminder looked good in what little action he saw last season, but this season he’s been a writeoff with a 3.35 GAA and the worst save percentage since his rookie campaign. Until he proves he can stay healthy – and deliver performances like Wednesday’s showing on a consistent basis – there’s little point for Fantasy owners give him the time of day.

Josh Bailey set up one of the Isles goals Wednesday, giving him a goal and three assists in his past seven games, which – sadly – qualifies as a bit of a hot streak for him. He showed promise in his sophomore effort last season, but the fact that he hasn’t been able to build on that – despite seeing significantly more ice time – is one of the bigger disappointments in this disastrous season on the Island.

The Islanders have built an impressive collection of young, homegrown talent, but Bailey’s ability to develop into a 20-goal man is definitely one of the keys if this club is going to make a legitimate run at a playoff spot next season.

Okay, let’s try to find something nice to say about this lost year on Long Island. Hey, the team leads the NHL with 15 short-handed goals. Woo hoo! That should keep you Islander fans warm at night, as you toss and turn under the covers with your Mike Bossy doll, agonizing over another frustrating season.

Of course the one player that has accounted for almost half of those shorties (Frans Nielsen, who leads the league with seven), hasn’t played since the final game of March, and will miss the rest of the season with a concussion.

By RotoRob
This entry was posted on Thursday, April 7th, 2011 at 1:26 pm and is filed under HOCKEY, NHL Today, RotoRob. You can follow any responses to this entry through the RSS 2.0 feed. You can skip to the end and leave a response. Pinging is currently not allowed.