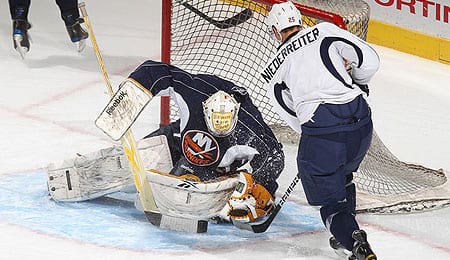 Kevin Poulin could emerge as the No. 1 man in the Islander net soon.

This is another short week because of the All-Star game. However, on Tuesday they will get back at it in the NHL which means it will be full steam ahead for your Fantasy hockey teams once again. Keep in mind with the five-day work week for some and six for other leagues, scores will be a bit skewed. That being said, it is time to check out some teams that are enjoying the schedule this week (which is a nice way of saying they are busy).

Every other team in the NHL plays three games this week, so that does make it rather easy. The All-Star game offers a nice break and the key is to look for those guys that get the rest as opposed to the ones that do not. The shortened week is all about timing and if you can find that fringe Montreal or New Jersey player, you may just be in luck.

The big question as we head into the unofficial second half is when does Sidney Crosby come back? His concussion has a ripple effect on the Fantasy world, but particularly on the Pittsburgh Penguins. Injuries work that way in the NHL, making a Fantasy owner’s life a living hell sometimes. Preliminary injury numbers are down below 125 for Tuesday’s games and could be lower. Some of the wounded can be found on this list.

The good news is that you can always find someone on the waiver wire and that is the reason why The Wire Troll exists. It would be a scary world if it did not.

At any rate, this will be a very brief edition because of the shorter week. If your week ends on Saturday you should note that some numbers will be different. In the Wire Troll, we use Monday to Sunday Fantasy leagues as our baseline. If that causes an inconvenience, we’re honestly so freaking sorry.

So who did we choose for this week’s list? Well, before we get to that, you should know that we will be tossing updates on Twitter from time to time as well.  So you can follow both The Wire Troll and our Twitter feed for the latest. Now it is time for our feature presentation.

Kevin Poulin, G, New York Islanders: Move over, Rick DiPietro — this could be the guy on Long Island for years to come. Yes, we just featured Poulin in the Troll a few weeks ago, but here is one guy who really has his head on straight for such a young prospect. Now, DiPietro may get most of the starts the rest of the way (assuming he can stay healthy for once), but do not sell Poulin short. He has found a way to succeed at every level and the .920 save percentage is not a fluke nor shocking. While he needs to learn how to handle the puck better and let the game come to him, Poulin is a talent that should become the eventual starter and maybe become some Fantasy owners’ “diamond in the rough.”

Andrew MacDonald, D, New York Islanders: Another Islander, ah, I can hear it now. Defense is a tough position to find true waiver talent and MacDonald has the goods. Okay, he only has one goal, but he’s racked up 16 assists, including 10 on the man advantage. MacDonald is also only a -2 in 34 games for the Isles, but that is pretty good numbers in anyone’s book. These young players have to mesh, and with guys like Kyle Okposo and John Tavares surrounding him, the not-so-young MacDonald may have a pretty good chance of succeeding on Long Island because this franchise needs it.

Evgeny Dadonov, RW, Florida Panthers: There is something about this kid that I cannot put my finger on but he just oozes the goodness of a great player. He gets about a point every other game and has seen his ice time gradually increase from there. The key is patience with this 21-year-old prospect. If there is enough veteran mentoring, then Dadonov really has the chance to grow. Also, he has to develop his shot more, as it is above average. It’s all in his head; with further development, everything will come. Dadnov’s level of skill set is above almost every Panther and that is always a good thing indeed.

Good night everyone and enjoy the rest of the All-Star game!

By Chris Wassel
This entry was posted on Sunday, January 30th, 2011 at 5:44 pm and is filed under Chris Wassel, HOCKEY, The Wire Troll. You can follow any responses to this entry through the RSS 2.0 feed. You can skip to the end and leave a response. Pinging is currently not allowed.