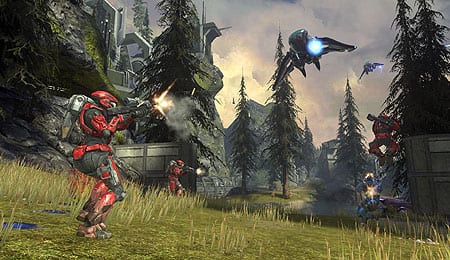 Even though the transition of the Halo universe from Bungie to 343 Studios was well publicized, it was still odd to see 343 creating the second piece of downloadable content for Halo: Reach. Released on Tuesday, the Defiant Map Pack contains a pair of new adversarial locations along with the first new firefight map we’ve been given post-launch.

It will set you back 800 MS Points (US$10) to download Highlands, Condemned and Unearthed along with the opportunity to snag three new achievements for a total of 150 Gamerscore.

Fans of the Halo fiction should get an extra kick out of this map, which takes place at a top secret Spartan training facility nestled in the Highland Mountains. Symmetrical buildings are located on either side of the map with a small island surrounded by water serving as the midpoint. Given the long lines of sight and available high ground, you’ll want to be fast and decisive when traversing the middle portion of the map, using the downed Pelican for cover. Paths circumvent the central area on either side, and given the map’s size, there could be multiple skirmishes going on during the same battle.

While perhaps not as big as Breakpoint, Highlands has a more interesting and balanced layout and is capable of hosting Big Team Battles as well as Team Slayer and Objective game types. One frustrating element at work is the number of structures and rock formations accessible with the jetpack that immediately trigger the “Return to Battlefield” countdown. Several vehicles are available, which can make for some enjoyable combat thanks to a lot of little nooks and crannies where you can seek cover or unleash a deadly counter-attack.

If you downloaded the Noble Map Pack you’ll probably notice some similarities between this offering and Anchor 9. For starters, it’s set in a communications station orbiting Reach, which allows for some cool views of UNSC and Covenant forces fighting in the surrounding space. There is also a low gravity area, though this one is the central point of the map and there’s no way to fall to your death. Heavy weapons such as sniper rifles, shotguns and an energy sword are scattered about along with a rocket launcher found in the middle of the low gravity room.

It’s a mid-sized map, feeling a bit spacious for Free-for-All modes, but making for some intense Team Objective and Slayer battles. Gifted snipers can cut down advancing foes (unlike Anchor 9, the barrier surrounding the low gravity room does not stop bullets) despite the split-level design that would seem to dissuade long-range fighting. There are multiple approaches, though, so those that move quickly have an excellent chance of flanking and eliminating entrenched foes.

Set at an abandoned titanium mine on Reach, Unearthed is really well designed in that it can handle singular firefight modes (like Score Attack) as well as four-player showdowns against the Covenant. The map is effectively split by a large road that separates the primary structure from a fairly large section of open space and a massive tower. In single-player affairs, the action is easily funneled into the main building as well as the connecting walkways. Conversely, in larger encounters, you can send two Spartans out in the Rocket Warthog, using the rocks and dips in elevation as makeshift cover for hit-and-run attacks while the others move among the structures.

Due to the sheer size, though, it’s easy to get divided without good communication, and there are few areas available that provide much cover on more than two sides. Even the primary spawn point, which is probably the most defensible position on the map, offers two entrances and a row of open windows for Covenant forces to fire into. Pretty much every time I played I felt like I was in nearly constant danger of being overrun, and I was even killed by melee attacks from behind more than once — something that almost never happens to me in firefight.

Although it doesn’t carry Bungie’s pedigree when it comes to Halo, 343 Studios has done a fine job with the Defiant Map Pack. The maps are detailed, well designed and should provide hours of enjoyment, particularly for firefight regulars.

By Herija Green
This entry was posted on Wednesday, March 16th, 2011 at 1:03 pm and is filed under Herija Green, Video Game Reviews. You can follow any responses to this entry through the RSS 2.0 feed. You can skip to the end and leave a response. Pinging is currently not allowed.