The Wire Troll: Has Ant-Rand’s Time Come at Last? 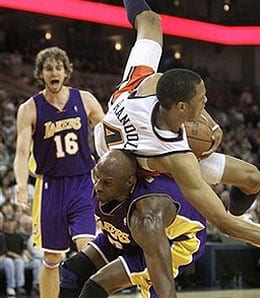 Apparently, Khloé Kardashian isn’t the only person that likes to ride Lamar Odom.

Welcome to the Week 20 edition of the Wire Troll, our weekly look at players that may be available on your league waiver wire, but could see a spike in Fantasy value due to a variety of circumstances.

The NBA season is passing the three-quarter pole and has a firm eye on the stretch run, while Fantasy hoopsters have their eyes on their league’s playoffs or a top-three finish in Roto formats. The Troll is here to help, as we have a fine assemblage of waiver-wire prospects for you again this week.

We have a lot of fun here at the Wire Troll every week, but I wanted to take a moment and note the passing of a person and an era. Largely lost amid the media frenzy surrounding the latest celebrity train wreck last week was the death of Mr. Frank Buckles, the last surviving American veteran of World War I. It is through the heroic and selfless actions of Mr. Buckles and the millions of others like him that we enjoy the freedom to, among other things, express our thoughts and opinions… and that is a debt we can never repay. Next week, I’ll be back slicing and dicing those real-world cartoon characters I so favour, but for now, please join the Troll in saluting and bidding farewell to the Last Doughboy… may he and his compatriots rest in peace.

Anthony Randolph, Minnesota Timberwolves: March has come in like a lion for the athletic Randolph, as he is finally, at long last, seeing enough court time to become Fantasy relevant. So far this month, the former Warrior and Knick is averaging 11.7 points and 5.3 rebounds, but the big story is that he has logged almost 52 minutes over his last two games. Randolph has the tools to succeed in the NBA, and the Wolves appear to be willing to give him a chance to show his stuff. If he can remain focused, Randolph could become a bona fide Fantasy force, but for now he’s just a speculative add in deeper formats. Keep an eye on this situation, though.

Marcin Gortat, Phoenix Suns: Gortat has been one of the better waiver-wire adds of the 2010-11 season, but a minor slump in mid-February caused him to lose favour, and he was dropped in some leagues. Check your wire now, and if Gortat is sitting there, it’s time to hit the “add” button. Over his last six games, he’s averaged 13.3 points, 9.7 rebounds and one blocked shot per contest. While those numbers won’t knock your socks off, they’ll do if you’re trying to account for an injured starter or racing to fill up your game allotment in Roto formats. Gortat should be owned in all leagues of 12 or more teams, and he could be useful in smaller head-to-head formats.

Samardo Samuels, Cleveland Cavaliers: The Troll loves those Cavs, and this week we feature yet another member of the NBA’s worst team. With Antawn Jamison likely done for the season, the heretofore-unknown Samuels stepped into the starting lineup on Wednesday, and responded with 23 points and 10 boards. He followed that up with 15 and 6 the following game, and looks to be locked in at the four for at least the near future. While it’s certainly notable that Samuels has achieved this degree of success, keep in mind that he was not drafted, and started the season in the D League. His stats at Louisville were rather ho-hum, and it was a surprise to see him jump into the draft after his sophomore season. This may be a flash in the pan, but Fantasy owners in deep leagues should add Samuels just in case he’s the real deal.

Austin Daye, Detroit Pistons: Tayshaun Prince’s back is acting up, and it appears as though the veteran may have fallen out of favour in Detroit after he was involved in the recent player protest. Whatever the reason for Prince’s absence, Daye has stepped in and stepped up in a big way. The second-year man has averaged 15.3 points, 3.7 rebounds, two three-pointers and 1.3 assists per game over his last three outings, and should continue to see minutes as long as Prince and Ben Wallace are missing in action. He’s a good short-term add, but keep the bait knife handy.

Wes Johnson, Minnesota Timberwolves: Johnson missed Friday’s game due to an illness, but he has been stuffing the box score lately, averaging 14.7 points, 1.8 treys, 5.0 rebounds, 3.0 assists, 1.2 steals and 1.3 blocked shots since the All-Star break. His playing time looks to be secure for at least the near future, as the Wolves are hopelessly out of the playoff picture and won’t be afraid to play the kids. Johnson is a great pickup in Roto leagues, as his all-around game should help your cause regardless of your needs.

James Harden, Oklahoma City Thunder: Harden has been on a fine roll lately, averaging 17 points and 1.8 three-balls since the All-Star break. Jeff Green’s departure at the trade deadline means that Harden should receive plenty of looks from downtown, as the Thunder did not add a long-range shooter to replace Green. If you need points and threes, Harden is a fine add; just don’t expect much in the way of peripheral stats from the youngster.

By Buck Davidson
This entry was posted on Saturday, March 5th, 2011 at 5:11 pm and is filed under BASKETBALL, Buck Davidson, The Wire Troll. You can follow any responses to this entry through the RSS 2.0 feed. You can leave a response, or trackback from your own site.