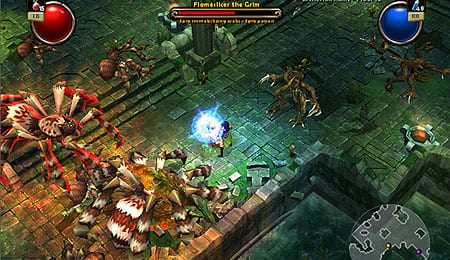 It’s gonna take more than rain to wash these spiders out.

Microsoft’s House Party promotion gets its fourth installment with Torchlight from Runic Games. Originally released on PC back in 2009, the hack n’ slash action RPG is getting a second life on Xbox Live Arcade. The transition is undoubtedly a smooth one, even if your hours hunting loot are still destined to be undertaken alone.

Runic Games handles the always iffy proposition of transferring a PC setup to console nicely as combat is second nature and item management works well enough. Each character has a basic melee attack (X) and a button to pick up items (A). Beyond that, you’re able to map four spells/abilities to the remaining triggers and face buttons — press the d-pad up/down for two sets totaling eight slots. The camera is fixed, leaving the right stick to zoom in and out only.

Although Torchlight is a good looking game, the number of enemies and constant spell effects filling the screen don’t give you much of a chance to admire it. Zooming in does reveal some respectable detail work in the environments and enemies, but considering how difficult it is to keep track of things when you’ve got the camera pulled all the way back, it’s unlikely you’ll even bother. There is some slowing here and there when things really get out of hand. It’s never too bad, though.

Each of the game’s settings (separated by a boss battle and ensuing waypoint) has a distinctly different look to them. However, they all “feel” the same. That’s not surprising given the dungeons’ randomly generated nature, but it can get tiresome to see the same formula of branching paths and bridges throughout the levels.

The musical score in Torchlight is respectable, as is the sparse voice acting. The sound effects don’t fare nearly as well as there just isn’t much variety relative to the amount of time you’ll spend hacking and enflaming hordes of enemies. Repetitive is one thing, annoying is another, and the near constant whimpering of your pet or the in-game voice informing you for the umpteenth time that said pet is fleeing definitely falls into the latter.

While Torchlight certainly has its share of virtues, the story is not one of them. What minimal plot exists is told mostly via screens of text. Essentially the town of Torchlight was built above a series of ember mines — ember being a valuable ore with magical properties. However, the ember is having a corrupting effect, leaving the town in extreme peril. Now it’s up to you (created from among three character classes) to investigate the subterranean realm and cleanse it of evil.

Along the way you’ll collect loot, lots and lots of loot, the pursuit of which is truly the driving force behind the game. Like the dungeons, loot drops are purely random, and you’ll identify/sort through an amazing amount of sub-par items to find that one game-changing weapon or piece of armour. But when you do, somehow all that effort seems worthwhile.

Armour, weaponry and jewelry are all tiered. For example, orange items are unique, purple items are part of a set (the more of which you equip, the more bonuses you get), green items are enchanted and so on. In addition, many items contain slots that your collected ember can be inserted into. These provide even more enhancements, and as you progress you’ll find your equipment will often have a laundry list of augmentations to things like health, armour, elemental resistance, attribute bonuses and more.

Of course no self-respecting dungeon crawler would be complete without the arcane, and Torchlight delivers a healthy selection of spells as well. Some you’ll find or purchase, while others will be unlocked through the use of skill points you’ll earn each time you level up. Within the list of available spells you’ll find plenty of offensive and defensive options along with some cool summons.

Regardless of whether you choose to begin your adventure as an alchemist (wizard), destroyer (warrior) or vanquisher (ranged specialist), you’ll have lots of options as to how to progress and grow your created character through the distribution of attribute points, unlocking of skills and collecting of items. You’ll also have a faithful pet by your side that can equip jewelry, learn spells and even be transformed by consuming fish. All of which adds a good deal of replay value.

Combat in Torchlight can get pretty repetitive. Sure, you’ll do some planning — more so as the ranged/magic classes — but when groups of enemies inevitably close the distance on you, the screen often becomes a muddled mess where spamming “X” and keeping an eye on your health meter are all you can really do. This rarely bothered me as the hunt for items and my character’s growth into a legitimate bad ass kept me engrossed. Others, however, may crave more variety.

Perhaps the biggest drawback is that, like its PC predecessor, Torchlight on Xbox Live is purely a single-player affair. That lack of multiplayer support (local and online) is going to ruffle some feathers. I’d like to think the game’s fun factor and addictive qualities more than compensate for the omission, but I’m sure for some it constitutes a deal breaker

Easy to grasp and hard to put down, Torchlight is a shining example of a genre we console gamers don’t get to see very often. Action RPG fans should take one look at the 1,200-point asking price and laugh all the way to the bank… the blood bank.

By Herija Green
This entry was posted on Sunday, March 6th, 2011 at 5:49 pm and is filed under Herija Green, Video Game Reviews. You can follow any responses to this entry through the RSS 2.0 feed. Responses are currently closed, but you can trackback from your own site.