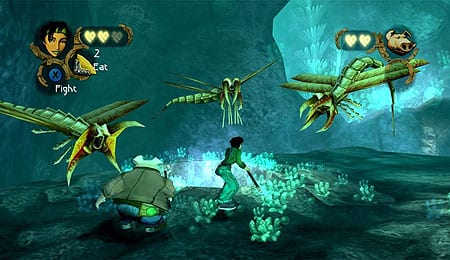 Microsoft’s House Party promotion reaches its third week with the release of Beyond Good and Evil HD from Ubisoft. This high definition remake of the critically acclaimed title offers gamers another chance to experience it nearly eight years after it first made its way onto consoles. Should they take it?

Whether you’re on foot or in a vehicle, the fundamentals are well covered. Melee combat consists of using just two commands (attack and dodge) and is easy to pick up. Your camera (used to gather evidence as well as identify animals) is straightforward enough early on, though once you obtain a disc launcher, having them both work out of the same first-person view is somewhat awkward. Piloting your hovercraft can be a little temperamental in tight spaces, but is fine otherwise.

What knocks the score down here is the oft-times frustrating battle with the in-game camera (the one that shows the action on screen, not the one you take photos with), controlled with the right analog stick. Sometimes it offers full range of motion. Other times it wants to snap back into place as soon as you let go. This can become incredibly tiresome, and I even experienced some mild motion sickness during one hovercraft section — something that never happens.

Originally released on the Xbox/Playstation 2 generation of consoles, Beyond Good and Evil HD has been re-mastered to run in high definition with beautiful results. The characters, which always possessed a cartoonish charm, look very smooth and colourful while maintaining that distinctly retro look. There’s a nice mixture of stealth and speed elements throughout the game, and they’re all handled without a hint of slowdown. Fluid cut scenes and some cool dynamic camera angles add even more depth to a well-rounded graphical package.

You’d be forgiven if you thought a title featuring characters like Jamaican-accented rhinos and a self-deprecating talking boar would aim for a goofy vibe when it came time for voiceovers. However, that isn’t the case at all. The voice acting is very good, as lines are delivered with actual emotion, conveying not just comedy, but things like sadness, determination and gratitude as well. A diverse and excellent soundtrack provides the perfect companion to the game’s defining moments.

Set on the planet of Hillys, Beyond Good and Evil HD places you in the role of Jade, a photojournalist helping to raise a group of orphaned children. She is aided by a boar-like creature named Pey’J, who has served as Jade’s guardian throughout her upbringing. Already struggling to make ends meet, their planet is also under constant threat from an alien race known as the DomZ.

It’s believed that the only thing standing between them and the people of Hillys is the Alpha Section, an elite military unit fending off the DomZ, but circumstances quickly push Jade into taking on a mission that introduces her to the subversive IRIS network. Recruited into the group, Jade must now seek out evidence that proves the Alpha Section isn’t necessarily the noble faction it appears to be.

While it’s a cool setup to be sure, that wouldn’t mean much if it wasn’t fun to play. Thankfully, Beyond Good and Evil HD is a top-flight action-adventure game with a lot of divergent pieces. There’s both ranged and melee combat, puzzle solving, stealth elements, platforming, hovercraft racing, animal cataloging and more. It may sound like overkill, but it all comes together nicely.

Combat isn’t deep, and yet it never felt overly simplistic either. Yes, you have just one attack button, but from that you execute a series of cool looking flips and combinations. Plus, since you spend the majority of the game with a partner (either Pey’J or IRIS operative Double H) you are able to launch special moves where enemies are bounced into the air for you to send flying across the screen.

Traveling around the world is done by hovercraft. Each of the game’s primary missions and locations are accessed this way, though there are plenty of goodies to be found that encourage exploration such as rare animals to photograph and races to compete in. As you progress you’ll acquire more abilities for your vehicle such as a homing cannon and speed booster, which allow access to areas that were previously unreachable.

Outside of the aforementioned camera issues, which directly result in the majority of the game’s annoying moments, there are a couple other notable drawbacks. One is that the missions themselves are very linear and generally offer up only one solution. For example, if you’re meant to sneak through a section then not only is fighting unrealistic, but there’s often only one possible path to get through. Also, outside of those stealth missions the challenge level is quite low. In fact, with very few exceptions the only times I even came close to dying in designated combat sections were during boss fights.

Even with that, it still took more than 10 hours to see Beyond Good and Evil HD to its conclusion, which amounts to a lot of bang for your buck (800 MS Points – US$10).

Beyond Good and Evil HD is a smart game. It augments its diverse gameplay elements with a strong story that actually makes you care about those involved and want to see it through to the end. If you played it when it first came out this is the perfect excuse for Round 2. If you missed its initial run this is an opportunity to make amends.

By Herija Green
This entry was posted on Wednesday, March 2nd, 2011 at 2:01 pm and is filed under Herija Green, Video Game Reviews. You can follow any responses to this entry through the RSS 2.0 feed. You can leave a response, or trackback from your own site.