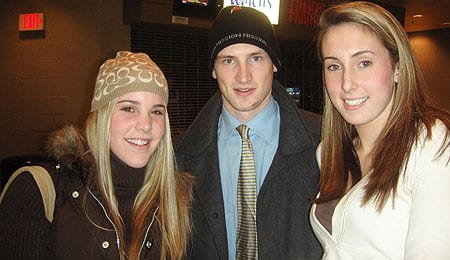 Buffalo hopes Brad Boyes — with or without his bevvy of young tarts — can boost its attack.

By the time you read this, the NHL trade deadline will be over. Trades will come and go and rumors will have been flying faster than you than you can ever keep your eyes on them. The goal is to take a snapshot of the early part of the day and maybe throw in a couple suggestions on what to take out of all of this.

In all, 16 trades occurred on Monday. There were a total of 35 players and 12 picks that were moved. When you think about it for a second, that sounds like a low numbers until you realize there were 31 trades completed between January 1 and February 27. When you take the scope in its entirety, it really was a very busy trade deadline, although maybe some people expected more action.

What we’d like to do here is to focus on Monday’s trades since the others have already been talked about so much. However, we will go back a bit and also look at the Brad Boyes deal. So while many want to focus on the big deal of the day (the Dustin Penner trade) and rightfully so, it was just easier to focus on the lesser trades. Those can be the ones that have more Fantasy impact down the road anyways. So now let’s take a look at some of the recent activity through the eyes of the Wire Troll.

Brad Boyes, RW, Buffalo Sabres: The trading of Boyes was a surprise to be honest, but St. Louis kind of realized it was becoming a seller and quick. The quirky thing is that he was more known as being a goal scorer but this season became more pass oriented. The 29 assists were unusually high and the 12 goals was lower than expected. However, 41 points is still pretty good, even if Boyes is having a bit of a down season.

The winger is only owned in 25 per cent of Yahoo! leagues and those figures range from 20-to-30 per cent in most Fantasy leagues. That is a low number and now that Boyes could have line partners the likes of Jason Pominville and Thomas Vanek, happy times could be ahead for Fantasy owners. That 9.6 shooting percentage could be on its way upward and points per game wise, Boyes could be approaching 3/4 to a full point a game. Take that, those of you that gave up on him too early!

Chris Campoli, D, Chicago Blackhawks: This pick sounds odd, as Campoli is only owned in 1 per cent of Fantasy leagues (or maybe 2 or 3 per cent in some), but he could be a decent pickup for the stretch run. When he was traded from the New York Islanders, Campoli had 13 points in 25 games for Ottawa. It has been a bad couple of seasons for the blueliner, but it is believed he could still be a viable No. 3 or 4 defenseman in this league. In Chicago, he just has to be a solid No. 5, but with some good play he could move to the power play second unit which is not a bad thing.

Do not be surprised if Campoli picks it up as he’s in is a contract year. The potential for making the playoffs can make players do many unexpected things. Maybe a point every two or three games and a bit more pop on the man advantage may make this player a viable candidate for your Fantasy team, assuming you’re in a deeper league of course.

Jason Arnott, C, Washington Capitals: So how would you like to man a second line in Washington? Does that sound appealing? Hey, and you can win faceoffs too? Well, then the Caps seem perfect for you. Yes, this sounds like a perfect picture for a great stretch run. Seriously, Arnott is only owned in 15-to-20 per cent of Fantasy leagues (17 per cent in Yahoo!). With seven points in his last 25 games, it was clear that he was hurting the Devils a bit, especially on the power play, where he was seeing ample time. Normally, Arnott is pretty good but for whatever reason it was not working.

In Washington, that should change. He potentially could be paired with Mike Knuble and even Alexander Semin from time to time or even be on the top line with Nicklas Backstrom or Alexander Ovechkin. Clearly, the defense first system instituted needed someone with a little more veteran presence. What can Arnott do in 20 games or so? He may be able to get you 12-to-15 points, win some critical draws, and provide leadership, but watch out for that +/-. It may be a bit improved, but Arnott’s wheels are not his strong suit anymore.

Next week we will take a look at how there could be some playoff gems just lurking out there. Send us your comments and by all means send us a message on Twitter on any waiver pickups you may have in mind. Who knows… they may be featured in the next Wire Troll. Good luck this week in your Fantasy leagues.

By Chris Wassel
Tags: NHL trade deadline
This entry was posted on Tuesday, March 1st, 2011 at 2:01 pm and is filed under Chris Wassel, HOCKEY, The Wire Troll. You can follow any responses to this entry through the RSS 2.0 feed. You can skip to the end and leave a response. Pinging is currently not allowed.