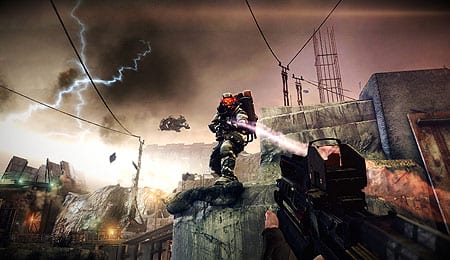 The Helghast rarely makes themselves such easy targets.

Whatever your personal feelings about them, there’s little argument that the landscape of first-person shooters has been dominated by two franchises: Call of Duty and Halo. Over the years plenty of would-be challengers have tried dethroning that pair without sustained success. The latest contender is Killzone 3 from developer Guerrilla Games, which attempts to provide Playstation 3 owners with an exclusive worthy of joining Call of Duty and Halo at the top of the heap.

From the default aiming sensitivity to the button mapping, everything about the basics just feels right in Killzone 3. There’s even some clever implementation of the six-axis feature when planting explosives and turning wheels. However, the game does feature a pair of omissions when operating from cover.

Most notable is the inability to go prone. This may sound inconsequential in a cover-based shooter, but even while behind cover you can still be shot by enemies in front of you (ones that shouldn’t have an angle). It’s at its worst when they have the high ground as no matter what you do, you’re leaving some portion of your body exposed. There’s also no way to move in cover while aiming — you can obviously strafe at any other point so I don’t understand the logic of prohibiting it.

Games keep pushing the graphical envelope and Killzone 3 is right on the cutting edge in many areas, providing some well-designed levels with tons of gorgeous detail work. Sure, you’ve seen war-torn cityscapes, lush jungles and snowy outposts before, but they’re so saturated with secondary elements — foot soldiers, vehicles, weapon fire, weather effects and more — that it takes the whole presentation to another level.

Unfortunately, there’s a price to be paid for the number of things going on at once. The frame rate is susceptible to dipping now and then, and there are times when objects (from fired bullet casings to enemy bodies) will float in mid-air rather than falling to the ground. Does it undermine gameplay? No. Does it stand out amid such overall brilliance? Yes.

Then there’s the matter of the in-game cut scenes. Killzone 3 has a ton of them, and while largely excellent I found the human faces to have a very strange, almost clay-like appearance. It’s a stark and unwelcome contrast to the pristine backgrounds. It’s also worth noting that seemingly each cut scene is preceded by fading to black. That break in the flow will undoubtedly annoy some.

As you’d expect with a Triple-A game imbued with gunfire and explosions, the sound effects are very strong, which pushes the soundtrack to second billing. While those elements are solid at worst, the game features a lot of radio chatter during several of its levels. This represents the low point as so much of it comes across as useless, especially when it’s coming from unknown squad members with minimal context as to what’s happening.

Conversely, the voice acting from the game’s cast is among the best I’ve heard in a shooter. Ray Winstone and Malcolm McDowell are tremendous in their roles as bickering rivals jockeying for power atop the Helghast’s hierarchy. James Remar also does good work as the de facto ISA leader with the entire group rising above an oft-times uninspiring script to deliver quality performances.

While Killzone 3 moves back and forth along the timeline, the majority of the game takes place six months after the ending of Killzone 2. You play as Tomas Sevchenko (“Sev”), a member of ISA Special Forces marooned on the planet Helghan, as he and a group of guerrillas led by Captain Jason Narville try to find a way back to Earth.

On the Helghast side there is an internal struggle to succeed the deceased Scolar Visari, who was killed at the end of the previous game by Rico Velasquez. Vying for the role are Jorhan Stahl (a private military contractor) and Admiral Orlock (the Helghast’s Commander in Chief), who both have very specific ideas for how the ongoing war with the ISA should be handled.

At first blush, these two elements seem like the foundation of a good story. They aren’t. Instead, Guerilla Games presents an endlessly predictable collection of cut scenes that centre on nearly constant conflict between the game’s characters wherein no one evolves an inch. The interplay between Sev, Rico and Narville is particularly painful. Narville is always the by-the-numbers commander that won’t listen to his battle-hardened comrades even after they’ve been proven right for the 20th time. Rico is the “leave no man behind” guy while Sev vacillates between the two.

The Orlock/Stahl storyline is better thanks in large part to the work of McDowell and Winstone in their respective roles, but the scripting and storytelling is sub-par throughout. No, Halo: Reach and Call of Duty: Black Ops weren’t exactly sweeping narratives that explored the horrors of warfare, but at least there was a plot in place you could follow. With Killzone 3 it’s a muddled mess, punctuated by an incalculable number of “Character ‘A’ saves Character ‘B’ from certain death” moments.

Moving past the story to the actual gameplay reveals a campaign loaded with chaotic firefights, on-rails vehicle segments and awesome set pieces. In fact, it’s Killzone 3’s pacing that really differentiates it from other first-person shooters. Guerrilla Games was mindful of not overdoing the cover-based elements and inserted a number of on-rails sections to vary things instead of providing more traditional down time in the form of a sniper mission or village clearing melee fest.

Whether or not you’ll appreciate the developer’s efforts in that regard is another matter entirely. For me, the vehicle levels weren’t much fun as they mostly consisted of memorizing where enemies were going to appear and then holding down the triggers. Luckily, none of the vehicular segments last more than a few minutes, and the game is always quick to get you back on the ground.

It’s here that Killzone 3 excels. Going toe-to-toe with the Helghast is no picnic, and regardless of what difficulty you’re playing on they’re not going down easily. Enemy A.I. is generally good, with foes sticking to cover unless they’ve got a significant armour or weapon advantage, in which case they’ll advance aggressively on your position. Patience and steady aim are keys to success as those that abandon cover against more than one or two soldiers won’t last long.

The Helghast aren’t above some cheap tactics, however, most notably their amazing ability to know exactly where you’re going to be. Several times during the campaign you’ll encounter situations that seem artificially manufactured to get you killed when enemies are poised to drop you the second you appear. Once you know they’re waiting, you can plan ahead, but on that first trek be prepared to eat some undeserved lead. Grenade spamming can also be an issue, though not as much as in other titles.

While actual play time will vary based on skill and difficulty level, the campaign should take roughly six or seven hours to complete. You can also play through with a friend via local co-op (no online) with a side-by-side split screen. There are definitely some highs (jungle level) and lows (shooting down missiles), but Killzone 3 has enough action to warrant at least a couple runs through the campaign.

Like pretty much any successful shooter these days, Killzone 3 saves its best for multiplier. It’s a fairly streamlined affair with only five classes and a relatively small number of guns and secondary abilities to unlock for each, but the upside of that is if you focus on just one of them you can have access to a high level loadout in short order. The five classes all feel different from one another with unique primary and secondary skills available such as an engineer that can create/repair bots or a marksman that can turn on an active camouflage that makes him nearly invisible when stationary.

There are only three modes available: Guerrilla Warfare (read: Team Deathmatch), Warzone (returning from Killzone 2 with a smorgasbord or play types rolled into one) and Operations (full-scale battles between attacker/defender with cool cinematic scenes depicting actual team members of both sides by name). During each match you’ll earn points for kills, assists, completing objectives and more. These allow you to level up, which unlocks some universal items (like body armour) as well as giving you a skill point to buy the aforementioned class-specific abilities.

Despite how much fun multiplayer is, there have to be questions raised about the long-term viability of it given its three modes and eight maps. More downloadable content is in Killzone 3’s future, but introducing a multiplayer with such limited scope could be dangerous given the constant onslaught of new shooters entering the market. By the time Steel Rain DLC arrives, many may have moved on.

Killzone 3 is a title undermined by qualifiers. The campaign is relentless and action packed, but the story is a mess. Multiplayer is exciting and well thought out, but there are only a handful of modes and locations. It’s tantalizingly close to great. Ultimately, though, Killzone 3 has to settle for being very good.