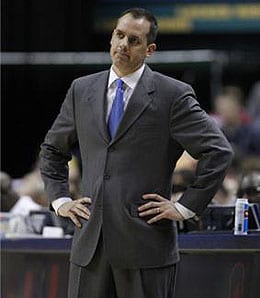 Since Frank Vogel took over, Miami is the only team to beat the Pacers.

The Indiana Pacers have a young, improving team that looks poised to make the playoffs for the first time since 2005-06, but on Tuesday night they got schooled by one of the top teams in the Eastern Conference.

The Miami Heat walked into Conseco, jumped out to a huge first quarter lead, gave it all back, and then came on strong in the final quarter to beat the Pacers 110-103. Of course, if you could just take Miami out of the equation, Indiana would be a perfect 9-0 under interim coach Frank Vogel. Instead, it’s lost twice over that stretch to the Heat, but the offense has been rolling, scoring at least 100 points in every game under Vogel.

Indiana fell victim to Miami’s stifling defense in the final quarter, managing just 6-of-23 from the field in the fourth, wiping out any chance of completing a phenomenal comeback.

But the fact that the Pacers came back from 24 points down – and actually took a brief lead early in the fourth quarter — even though star Danny Granger wasn’t at his best, is a great sign. Granger was on the court more than any other Pacer, but he is actually seeing a bit less PT recently as perhaps Vogel is trying to ease the load on his main man. At any rate, Granger had a poor shooting night, going on 5-for-13 from the field (including just 1-of-5 from beyond the arc) and only 3-of-5 from the line for 14 points. He somewhat salvaged his line for Fantasy owners on the defensive end with a team-high nine boards and two steals.

What worries me a bit is that, notwithstanding Tuesday, Granger has been shooting the ball very well lately, yet his touches are down with just 14 field goal attempts per game in February – by far his lowest number of the season. If his shooting touch cools off, Granger’s scoring is primed to drop quite a bit. Actually, his overall touches are down for the second straight season, and that’s already taken his PPG from a career-best 25.8 in 2008-09 to 24.2 last season to only 20.9 this season. Granger was the top pick of the second round (13th overall) in my expert league this season; at this stage, he could be a borderline second rounder at next year’s draft.

Interestingly, Granger has been mentioned as a trade target of the Rockets, but I can’t see Indy peddling its star with its first playoff spot in five years a very real possibility. There might be a Hoosier revolution if that happened.

But if Granger has been a disappointment to his Fantasy owners, what about Darren Collison? We expected him to soar this season now that he had his own offense to run. In fact, we had him pegged as a top 10 Fantasy PG in the preseason, but he’s barely been a top 25 player at his position so far. Collison did manage to drop five dimes, pull in three boards and bag a couple of steals Tuesday, but his putrid 1-for-11 shooting for a paltry seven points sure didn’t help his owners. He failed to hit a three and committed three turnovers to further cement another stinker of a night.

Collison was coming off a big scoring night on Saturday in Milwaukee, but Tuesday gives him two games in the past three that he’s failed to score in double digits. Similar to Granger, his touches are down this month, but he’s shooting much more from beyond the arc and is averaging a trey per game in February, helping to take the sting out of his reducing scoring and assists. Overall, Collison’s shooting touch has dropped this season, and the fact that his assists per game is down by almost one per game despite the fact that he’s now a full-time starter and averaging almost three more minutes per game really speaks to what a killjoy he’s been for Fantasy owners that expected a major breakout.

The scariest part of Collison’s Tuesday performance was that he was actually outplayed by backup A.J. Price. Obviously, unless you’re in a seriously deep league, Price is way off the Fantasy radar, but his play Tuesday is worth noting as he reportedly pushed the ball up the court very well, helping offset Collison’s rough night. Price nailed a couple of threes on his way to eight points and five assists – the most helpers he’s had in over three weeks. He pitched in with a steal, but until Price starts playing 20 MPG, there’s not much point in paying attention or for Collison owners to start sweating more than they already are. In fact, Price saw more action as a rookie last season, so that pretty much tells you everything you need to know about his development.

Roy Hibbert’s renaissance under Vogel continued on Tuesday. He racked up two more blocks, giving him at least one in 11 straight, and scored a team-high 18 points, reaching double digits for the eighth time in the past nine games. The 7-of-16 shooting sure left something to be desired, but the key here is the number of touches – the most on the team. Indy is feeding the big man the ball, and his stock is rising as a result. Besides, his shooting touch has been much better lately – a season-best 50 per cent in February – and even his paltry steal numbers are up a bit. Overall this season, his minutes are up, but he’s been pretty inconsistent and hasn’t taken the quantum leap we all thought he would.

Still, Hibbert is really impressing observers lately, and he’s definitely one of the Pacers that has most benefited from Jim O’Brien’s departure. We’re expecting a big second half from the big man.

By RotoRob
This entry was posted on Wednesday, February 16th, 2011 at 4:16 pm and is filed under BASKETBALL, NBA Today, RotoRob. You can follow any responses to this entry through the RSS 2.0 feed. You can leave a response, or trackback from your own site.