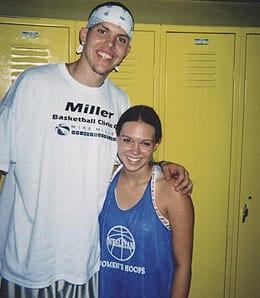 Mike Miller (left) has been cleaning up the glass lately.

The Miami Heat played up its matchup with division rival Orlando on Thursday night, even though it’s only early February.

But clearly, LeBron James was taking that seriously as the Heat walked into Orlando and came away with a 104-100 win as he went completely ballistic. In fact, the rest of the Miami roster could have stayed in the locker room and King James might have won it by himself.

All he did was can 17-of-25 from the field and 14-of-17 from the line for an NBA season-high 51 points, 11 rebounds, eight assists, three treys, a steal and a block. I suppose that’ll do for a night’s work. James might have won his owners their week with this one game, a very welcome development after he “only” managed 24 points and four rebounds in Monday’s win over his ex-team. By the way, the only other player over the last 25 years to score at least 50 points with 11 rebounds and eight assists in a game? Michael Jordan.

Miami jumped out to a 30-26 lead after one quarter as James put up – get ready for this – 23 of the Heat’s points. Are you freaking kidding me? He was ridiculously hot early, draining his first 11 shots of the game, so the team just kept feeding him the rock and getting the hell out of the way. Smart choice when LeBron is in that kind of zone.

Dwyane Wade enjoyed a game-high +15 ranking, but from a Fantasy standpoint, he didn’t do much, managed just 14 points, four boards, one assist and zero 3-pointers. At least he blocked a pair of shots and had a steal, but this was a forgettable night for Flash owners as he deferred to James in this one. Owners should track the latest news to make sure Wade’s back is okay after he took a hard foul by Dwight Howard in the third quarter.

James’s scoring output was the fifth highest of his career as he helped Miami to a fourth straight win, an important run with Atlanta playing well lately. The Heat is now just 2.5 games behind Boston for the No. 1 seed in the Eastern Conference and has taken a two to one lead in its season series with the Magic. While Miami almost frittered away a 23-point lead Thursday, it was able to survive Orlando’s huge fourth-quarter run.

There’s a good chance that Mike Miller is still sitting on your waiver wire (40 per cent ownership in Yahoo! leagues), and while his minutes and scoring have been inconsistent, he’s rebounding the ball lately like nobody’s business. Miller hauled in another 11 boards Thursday, giving him at least six in six straight games – four of which have been double-digit efforts. Miller has barely averaged over five rebounds per game in his career, so I don’t know what the deal is here, but for a guy normally considered not much more than a 3-point specialist, he’s providing a nice bonus for his owners. I wouldn’t bank on this rebounding tear continuing for long, but you may as well ride it while you can.

Meanwhile, the three-headed monster that is the Heat’s centre rotation – consisting of starter Zydrunas Ilguaskas and backups Joel Anthony and Erick Dampier – continues to be a black hole for Fantasy purposes. The Big Z played less than three and a half minutes Thursday, managing nothing but a steal and a couple of fouls. He hasn’t even played 20 minutes in a game in over three weeks. Anthony has had some nice rebounding lines here and there, but really can’t be counted on for anything but blocks. I mean, sheesh, the steal he recorded Thursday was his first in almost two weeks. And then there’s Dampier, who on Thursday actually got some decent burn for once, but other than a couple of blocks, didn’t do much with it. This situation needs to be avoided unless an injury thrusts one of the trio into a 25 or more MPG role.

Oh, and the other Super Friend? Chris Bosh also had a rough night Thursday, hitting just 3-of-12 from the floor for 13 points and six boards. He did sink 7-of-8 from the charity stripe with four assists and a steal, but this wasn’t exactly vintage CB4. In fact, since he’s come back from the ankle injury, he’s been ice cold. Bosh enjoyed a solid first game back, but is just 7-for-23 with just 6.5 RPG in his last two games – unacceptable numbers for a big man.

Finally, it’s time to cut bait on James Jones, as he’s falling out of the rotation in recent games, ceding the 3-point role to Eddie House. Jones got less than 10 minutes of burn Thursday, and while he does have a steal in each of the past two games and continues to be a source of treys, until he starts playing 20-to-25 minutes per night, you can ignore him.

By RotoRob
Tags: NBA
This entry was posted on Friday, February 4th, 2011 at 2:26 pm and is filed under BASKETBALL, NBA Today, RotoRob. You can follow any responses to this entry through the RSS 2.0 feed. Both comments and pings are currently closed.