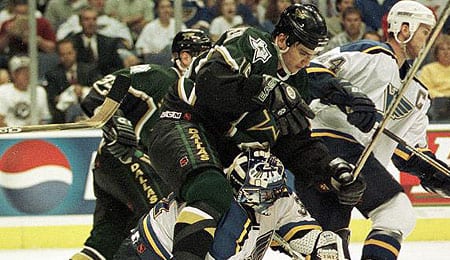 Can you imagine how strange it is looking at the way this season has unfolded, Fantasy-wise? Think about it for one second when you get a chance. It is to be said that there are no easy solutions this time of year. Players are not exactly available and teams are definitely taking stock of what they have and need. So there is a direction to go, apparently.

Listed below may or may not be a few players that could potentially find a home on your Fantasy hockey team. Controversy seems to be something much enjoyed at times these days. After all, despite the cold and everything else, we bring you The Wire Troll, commercial-free with no filler as always, just for the Fantasy hockey fan.

Jamie Langenbrunner, RW, Dallas Stars: There is a time when it sounded crazy, but now that Langenbrunner is back with Dallas it may be time to at least give him a look. While he will not ever again approach a 60-point season, Langenbrunner is very serviceable with the right linemates. Ultimately, it will be interesting to see whom he is permanently paired with in Dallas. James Neal is a perfect partner for a guy like the former Devil captain. The time ahead here should be crucial as early on, as the veteran’s Fantasy identity in Dallas should be formed quickly.

Kevin Poulin, G, New York Islanders: This rookie goalie has impressed early and if you can find him listed in leagues, then take quick advantage of it in the short term. Realistically, the Islanders are not a very good team and they may get hammered on occasion, but Poulin is the real deal. You could see it in his days in Bridgeport, the Isles’ AHL affiliate, where he had a 10-4 record in 14 games, earning a pair of shutouts with a 2.13 GAA and splendid .931 save percentage. Poulin’s lateral movement is solid and his mental attitude is sound. Simply put, he just does not get rattled when most do. The Islanders are in very good hands with this young netminder. The tests will come fast and furious, but it is worth a shot.

Jose Theodore, G, Minnesota Wild: Here is another shot in the dark as Theodore gets another mention from us, but the former Hart Trophy winning netminder has proved that he can still play in this league. Yes, he may go back to his old days of giving up “three or more,” but Theodore simply can be too good to not plug in to your Fantasy team, at least in the short term. This is the type of week that Theodore can keep a rhythm goes, as Niklas Backstrom (the goalie) is dealing with a nagging hip injury. Remember that Russian goalie prospect? Ah yes…never mind that, Fantasy hockey fans. Theodore is a solid second or third Fantasy goalie going forward.

You may also want to keep an eye on this small group of players:

Those are some players, just to name a few, ladies and gentlemen, that we are currently tracking. The slow expansion has begin and the All-Star break is just a few weeks away so our Best Of list is coming. Keep an eye out and stay warm out there but more importantly, stay hungry, Fantasy hockey fans.

By Chris Wassel
This entry was posted on Monday, January 10th, 2011 at 2:35 pm and is filed under Chris Wassel, HOCKEY, The Wire Troll. You can follow any responses to this entry through the RSS 2.0 feed. You can leave a response, or trackback from your own site.