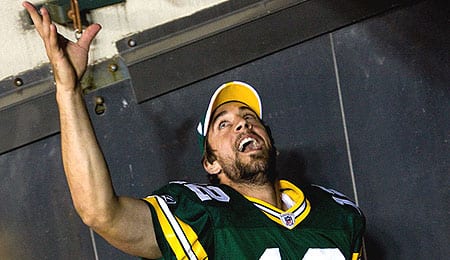 Things are looking up for Aaron Rodgers; how’d you like to find out what’s going on in his head now?

WIND Mobile is hosting a contest that asks the question: who would you like to speak to and why?

The reason I’m bringing this to the attention of our Canadian readers (sorry, my loyal readers South of the 49th Parallel, the contest is only open to residents of the Great White North, aged 13 and up) is that the company has chosen RotoRob.com as its sports blogging partner and your faithful editor as a judge for this contest.

So I’ll periodically provide updates as the contest continues over the next few weeks, mostly on Twitter and Facebook (if you’re not yet following me on either of these, click on the icons under the “Follow RotoRob or Die” headline in the top right corner of the site).

Here’s how it works: choose any person in the world (that is alive) that you would like to have a conversation with. Maybe you’d like to ask Sidney Crosby about “The Goal;” perhaps you’d prefer to talk hoops with LeBron James and ask him about why he took his talents to South Beach; maybe you want ask Brett Favre just what the hell he was thinking when he snapped that photo; better yet, how about talking to Favre’s successor, Aaron Rodgers, who has the Packers one win away from their first title since 1997? In fact, maybe you don’t want to speak to an athlete at all (blasphemy!). Instead you may crave a conversation with your favourite actor, musician, painter, writer, politician or Tim Horton’s cashier. Sheesh, maybe you just want to shoot the breeze with RotoRob. Hey, whatever floats your boat.

WIND will choose the five best entries and those people will get to engross themselves in their best conversation ever, something you’ll remember for the rest of your days. The winning entries will be 40 per cent based on votes and 60 per cent based on creativity – so you definitely want to put your thinking cap on if you have designs on winning.

In addition to the five grand-prize winners, there’s also a chance to win one of three $100 TicketMaster gift cards per week (the contest runs from January 24 to March 7). You can gain entries for the gift card component as follows:

The best part here is that on behalf of the five celebrities chosen by the winners, WIND will donate $100,000 each to the Canadian charity of the celebrity’s choice. The company will also donate another $100,000 to the Canadian charities that get the most votes from contest participants. The top-ranked one (based on your votes) will get $50,000 and the next five most popular will each haul in $10,000. That’s more than half a million (just slightly more than my compensation for participating in this contest) going to various good causes as part of this competition.

To enter, simply upload a video (of approximately 60 seconds) at Bestconversationever.ca or submit a written entry (maximum 200 characters) at the same site, stating who you would like to talk to and why.

To help maximize your chances, you’ll want to share your video as much as possible, and you’ll find share tools at the site to help you do so.

Best of luck to all my readers that plan to give this a whirl.

By RotoRob
This entry was posted on Monday, January 24th, 2011 at 2:28 pm and is filed under Contests, RotoRob. You can follow any responses to this entry through the RSS 2.0 feed. You can leave a response, or trackback from your own site.