This was year seven that I had the pleasure of working on Rotoman’s superb publication, The Fantasy Baseball Guide. Once again, the site was well represented, with Tim McLeod, Herija Green and Buck Davidson also contributing to this year’s guide. Personally, I wrote over 300 player profiles while also providing a few rookie choices and a smattering of picks and pans.

We’re very excited about this year’s issue, and without prejudice can say that it’s quite conceivably the best effort yet – no small task considering some of the gems turned out in the history of this guide. 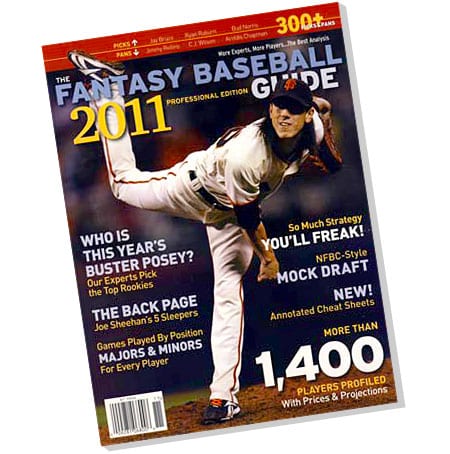 Here’s a glimpse of what you’ll be receiving:

The publication will be officially released on Jan. 18, but could begin showing up on shelves of stores like Walmart and Barnes & Noble sooner than that.

By RotoRob
This entry was posted on Wednesday, January 12th, 2011 at 11:53 am and is filed under BASEBALL, Magazine promo, RotoRob. You can follow any responses to this entry through the RSS 2.0 feed. You can skip to the end and leave a response. Pinging is currently not allowed.