The Wire Troll: Chase the Ace? 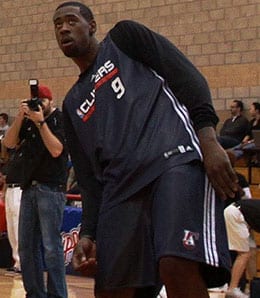 DeAndre Jordan has been bending over backwards to please his Fantasy owners.

Welcome to the Week 12 edition of the Wire Troll, our weekly look at players that may be available on your league waiver wire, but could see a spike in Fantasy value due to a variety of circumstances.

College Bowl Fever (excuse The Troll for snickering at that one) has given way to NFL Playoff Fever, so many of your league-mates may not be playing particularly close attention to their Fantasy hoops team these days. Too bad for them, because quite a few opportunities have presented themselves given the recent rash of injuries to some big-time NBA stars. Names like Dirk Nowitzki, Gerald Wallace, Caron Butler and Andre Iguodala are the latest to shape the Fantasy landscape by virtue of their absence, and the astute Fantasy owner (that hasn’t been lulled into lethargy by the BCS’s series of Undercard WhoCares Bowls) should be able to reap a nice reward by employing a grab-and-dump strategy.

Of course, the “grab” part of that equation is what The Troll is all about, so here we go. For updates during the week, don’t forget to follow the Troll on Twitter.

DeAndre Jordan, Los Angeles Clippers: Jordan’s play of late has Clipper fans again watching the court rather than eying the calendar for regular starting centre Chris Kaman’s return date. Kaman has not played since Dec. 5, and has made only two appearances since Nov. 9 – and a return does not seem imminent. That’s good news for Jordan, who has averaged 10.8 points, 11.2 rebounds and 3.5 blocks over his past six outings. Those block numbers are deceptively low, however, as he has swatted a ridiculous 19 balls in his past three contests. If you need big-man stats, and don’t mind an occasional clunker, Jordan makes a great fill-in until Mountain Man Kaman is ready to return.

Marcin Gortat, Phoenix Suns: With the Suns going small, Gortat laid an egg Friday night, but the big man had averaged 11.2 points over his previous five games. The game Friday was a blowout loss, so The Troll is wont to believe that the 12-minute outing was an outlier for the resurgent Gortat. While he’s not likely to post any monster lines, Gortat should provide serviceable big man numbers for Fantasy players in deeper leagues. Keep an eye on his playing time, though, as the Phoenix frontcourt is still very much an unsettled situation.

Tyler Hansbrough, Indiana Pacers: Hansbrough is a Troll favourite, so it did the old cold heart good to see the second-year man explode for 23 points, 12 boards and two blocks in his first start of the season Friday night. Pacers coach Jim O’Brien has been looking all season for a four that can score, and perhaps Psycho T will become that man. Deep leaguers should be all over the former Tar Heel, and managers in standard leagues should definitely have him on their short-range radar.

Derrick Favors, New Jersey Nets: The Nets have their eyes on three things these days: Their new digs in Brooklyn, Carmelo Anthony, and the list of players likely to be available in the 2011 NBA Draft lottery. New Jersey is going nowhere (but down) fast, so the time is now for the team to roll out its marquee youngster to try to energize its minuscule fan base. Favors made the first start of his career Wednesday, and proceeded to land in early foul trouble en route to a disappointing night. He turned things around the following game, though – posting 12 points, six boards and two blocks in 25 minutes. Favors has been named the starter for the foreseeable future, and is worth adding in deeper formats. Former starter Kris Humphries, meanwhile, should still hold some value…and hopefully his every appearance will signal the camera crew to cut to a lengthy shot (or some B-Roll footage if it’s a road game) of his current squeeze cheering him on. Hey, beats watching the Nets, right?

Chase Budinger, Houston Rockets: Budinger’s shot wasn’t dropping earlier this season, but the second-year man has turned it on in a big way of late, and is rapidly shooting his way into Fantasy relevance. Over his past six games, Budinger has averaged 11.8 points, four boards and two treys per outing – while shooting a phenomenal 60 per cent from the field. He could go cold again at a moment’s notice, but while Chase is seeing good minutes and his long-range bombs are dropping, he is worth adding in deeper formats.

Francisco Garcia, Sacramento Kings: Garcia has been a popular waiver wire pickup at various points during the past few seasons, and we’ve now arrived at one of those times. He has averaged 14 points, 1.8 treys, five boards, one steal and 1.5 blocks over his first four games in January, becoming a wire target in deeper leagues as a result. The block numbers don’t figure to hold, but as long as Garcia is seeing a decent number of minutes, he should remain a solid contributor of points and treys.

DeShawn Stevenson, Dallas Mavericks: When fragile forward Caron Butler went down, Fantasy owners were quick to jump on Shawn Marion as the logical beneficiary of increased playing time. Lo and behold, though, Stevenson has stepped up his game as well, averaging 17.7 points and 4.3 treys over his last three games. His numbers are bound to take a hit when Nowitzki returns to the Mavs’ lineup, but no one seems sure when that will be, as Disco Dirk is still listed as day-to-day despite missing eight straight games. Stevenson is a nice short-term add for points and treys, but don’t look for much in the way of peripheral stats; he’s basically a pure shooter.

By Buck Davidson
This entry was posted on Sunday, January 9th, 2011 at 1:01 am and is filed under BASKETBALL, Buck Davidson, The Wire Troll. You can follow any responses to this entry through the RSS 2.0 feed. You can skip to the end and leave a response. Pinging is currently not allowed.