The ceremonies continues as we move onto the diamond now, to bring you the 2010 RotoRob Baseball Awards.

Jose Bautista, 3B/OF, Toronto Blue Jays and Carlos Gonzalez, OF, Colorado Rockies: We have a first here at RotoRob with co-winners of the Fantasy Stud of the Year for 2010. From a Fantasy perspective, were there two players that were more dominating than Bautista and Gonzalez or that gave Fantasy owners a better return on their investment this past season? Bautista led the majors in homers by not just a couple — but by a whopping 12 over Albert Pujols. Along the way, in 569 at-bats, he drove in 124 runs, scored 109, stole nine bags, and hit for a decent .260 BA. Not too shabby for a player that went undrafted except in the deepest or AL-only leagues.

Carlos Gonzalez shows us all where his ceiling is.

CarGo slugged it out with Albert Pujols and Joey Votto all season long in the NL and, in 587 at-bats, he mashed 34 homers, drove in 117, scored 111 runs and stole 26 while taking home the batting title with a .336 mark. Considering Gonzalez was drafted in the middle rounds in most leagues, his value in terms of return on investment was as good as it gets. How many winning teams this season had Bautista and Gonzalez to thank for finishing in the money?

It’s a testament to the calibre of player that he is when Pujols puts up a 43-homer season and it gets labelled as pedestrian. Troy Tulowitzki had a September to remember, smashing 15 homers and driving in 40 runs, cementing his status near the top of draft boards for the coming season. Robinson Cano took the next step and looks to have supplanted Chase Utley as the premier pick at second base. NL MVP Votto had a season to remember finishing among the NL’s top three in homers, RBI, and batting average. Josh Hamilton hit everything in sight over the summer before being shut down in September, but he still walked away with the AL MVP Award for the World Series-bound Texas Rangers. Miguel Cabrera finished second in the AL MVP voting after posting another outstanding season for the Tigers and could very well be the best player in the game not named Albert. 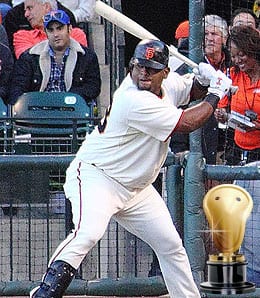 We can only hope that Pablo Sandoval doesn’t eat his award.

Pablo Sandoval, 3B, San Francisco Giants: The list of options for Fantasy Dud of the Year for 2010 is both long and illustrious. This was a season in which we saw Jacoby Ellsbury, Brian Roberts, Dustin Pedroia, and Grady Sizemore all lose significant playing time because of injuries, but to be a true dud a player has to inflict pain and suffering to his owners on a day-to-day basis. With that in mind, Sandoval has to come to mind immediately. Kung Fu Panda showed up in great shape — if round is your preferred shape — and proceed to shatter more dreams than the New York Giants did in Week 15. It was anticipated that Sandoval would build on that great 2009, but 13 homers, 63 RBI, and a very pedestrian .268 BA for a third round pick has to be labelled as a total disappointment. Maybe drinking Mountain Dew and eating Cheetos for breakfast is not the answer, Pablo?

Joe Mauer – the Fantasy Stud of the Year in 2009 — deserves to be slagged for a disappointing year. A late first round/early second round choice has to provide more than nine homers. Unless whiffs is a category in your league, Mark Reynolds’s season was woeful at best. When your homers drop by over 25 per cent, your stolen bases fall from 24 to seven, and you can’t hit your weight it doesn’t bode well for the Oriole faithful in 2011. Adam Lind was coming off a huge 2009 and all of a sudden forgot how to hit southpaws — a .117 BA against lefties just isn’t getting it done. We really didn’t expect Ian Kinsler to stay healthy, but nine homers in 391 at-bats leaves just a little to be desired. 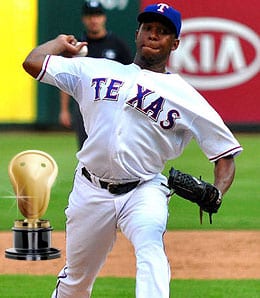 Neftali Feliz sure as hell didn’t pitch like a rookie.

Neftali Feliz, RP, Texas Rangers: The 2010 campaign produced some truly outstanding contributions from the rookie class with none better than the dominating performance turned in by Ranger reliever Feliz. The 22 year-old converted starter was thrust into the role of closer early in the season by the Rangers and he never looked back. The phenom amassed 40 saves, a 2.73 ERA, a WHIP of 0.88, and averaged over a strikeout per inning, making him a most deserving winner of both the RotoRob and AL ROY Awards.

Buster Posey was promoted to the majors at the end of May and was an integral part of the Giants’ run to their first World Series win since moving west. Jason Heyward — in between stints on the DL –managed to slug 18 homers and drive in 72 runs and looks to have an incredible future for the Braves. Austin Jackson scored 103 runs scored and stole 27 bags hitting at the top of the order for the Tigers. Jaime Garcia, in his first full season since returning from Tommy John surgery, won 13 games and posted a stellar 2.70 ERA. Gaby Sanchez, who was reportedly keeping first base warm for Logan Morrison, simply played his way into a full-time gig and ultimately forced the Marlins to shift Morrison into the outfield. Still with the Fish, Mike Stanton slugged 22 homers in only 359 at-bats. This kid is a monster and a 40-homer season could be right around the corner. All told, the class of 2010 is one of the strongest in recent memory. 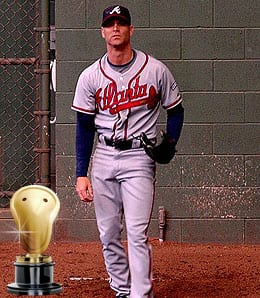 Tim Hudson, SP, Atlanta Braves: In a season dominated by pitching, Hudson’s performance – coming off Tommy John surgery — has to be one of the more remarkable. In 228 2/3 IP — his highest since way back in 2003 as an Athletic — he posted 17 wins to go along with a stellar 2.83 ERA and 1.15 WHIP. Hudson was a horse for the Braves all season and a key factor in the Braves winning the NL Wild Card.

Francisco Liriano looks to be almost all the way back to the levels he set during his amazing 2006 rookie campaign for the Twins. Adrian Beltre bounced back from a horrible 2009 season and slugged 28 homers and drove in 102 runs — in a contract year. Go figure. Vladimir Guerrero proceeded to prove the Angels wrong and put together an absolutely huge year with 29 homers and 115 RBI for the Rangers. 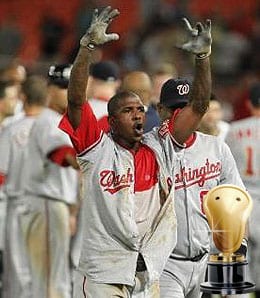 How could we not acknowledge the outstanding contributions of Nyjer Morgan? In the course of two weeks he found a way to alienate himself from the fans, the opposition, and his own teammates. Check out what Morgan managed to accomplish: he tossed a ball into the stands and jawed with the Philly faithful (talk about taking your own life into your hands), he went out of his way to toss an elbow at Cardinal back-up catcher Bryan Anderson, he toasted Marlin catcher Brett Hayes at home plate sending him to the DL with a separated shoulder, and finally he charged the mound against the Marlins after having a pitch thrown behind him and eventually raised the victory sign after finding his way from the bottom of the pile. Congratulations to Morgan for a series of antics that would cause even Milton Bradley to blush. 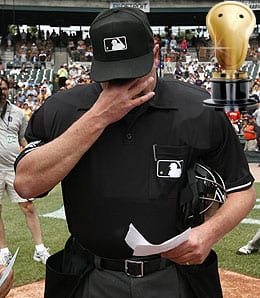 What a perfect game…too bad I missed it. (Paul Sancya/The Associated Press)

How could we omit the outstanding game-calling abilities of Jim Joyce? In the Year of the Pitcher, the record books will unfortunately be missing the great performance of Armando Galarraga on June 2 against the Tribe. He took a perfect game into the ninth inning only to see Joyce miss an easy third out at first base by a rather wide margin. A tearful and apologetic Joyce immediately fessed up and in a great display of sportsmanship Galarraga accepted his apology. Kudos here to Bud Selig for handling the situation in the manner we’ve grown accustomed to. He did nothing — which will probably go down in history as one of his better decisions. 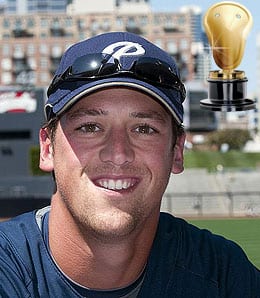 Luke Gregerson was a key member of the best bullpen in baseball.

Any series of awards would be very remiss if they didn’t include the amazing performance of the San Diego Padres’ bullpen in 2010. The collective group of Heath Bell, Luke Gregersen, Mike Adams et al. simply shut down the opposition game in and out and was a huge factor in seeing the surprising Padres duke it out in the NL West right to the final days of the 2010 season. Joaquin Benoit, Hisanori Takahaski, and Scott Downs — to name a few — have reaped some rather large dividends this offseason and you’ve got to think the success of the San Diego pen in 2010 was a contributing factor.

The Shortcut to Success Award 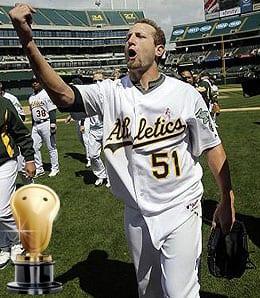 No one — not even A-Rod — better touch Dallas Braden’s bump.

Way back in April, a very tired and spent Alex Rodriguez took the shortcut back from third base to first base after a foul ball, crossing over the back of the mound against the Athletics’ Dallas Braden. In so doing so, Rodriguez apparently broke one of the unwritten rules of the game and sparked outrage from Braden. In a bit of the over-dramatic, Braden questioned Rodriguez’s intent and A-Roid chipped in with the assessment that it seemed a bit odd coming from a pitcher “that has a handful of wins.” Even Grandma got involved in the war of words. A little overkill by Braden, I’m thinking?

He Who Laughs Last Award 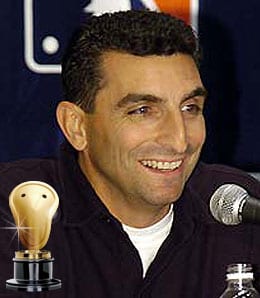 J.P. Ricciardi and his unique brand of integrity are back.

Two huge signings occurred this offseason. The Mets signed J.P. Ricciardi as a special assistant to GM Sandy Alderson, while Ricciard’s good buddy Adam Dunn signed a four-year, $56-million deal with the Chicago White Sox. Not a bad deal for a player that lacks a passion for baseball. It leads me to wonder if Francisco Rodriguez, Jason Bay, and Carlos Beltran are looking forward to dealing with a new front office member that is lacking in a passion for integrity.

Francisco Rodriguez does not have a future as a spokesman against elder abuse.

Speaking of K-Rod, how could we overlook his exploits after he laid a beatdown on his girlfriend’s father — the grandfather of his child — in plain view of the wives and girlfriends of various Mets? It earned Rodriguez a brief suspension, an arrest, and torn ligaments in his right thumb — which cost him the remainder of the season and opened up a nasty union battle. Good times! K-Rod is legendary for his fiery personality, but beating up an old man was a new low, even for him. Someone has been watching a bit too much Eastbound and Down, I’m guessing. Hey, Francisco: “You’re fucking out!” 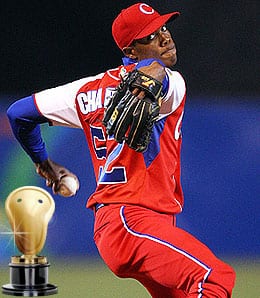 Considering how much the hype machine was churning, we all knew that Cincinnati Reds’ prospect Aroldis Chapman could bring the heat, but I’m not sure anyone was prepared to discover how much this dude can crank up his fastball. When Chapman reached 105 mph — the fastest pitch ever recorded in major league history — on September 24, the guy filming the pitch summed it up best as you can hear him simply mutter “wow.” Of course, even big league hitters can ultimately catch up to that kind of heat when there’s no strong secondary offerings, so let’s refrain from engraving Chapman’s Cooperstown plaque for now. Still, being able to throw a ball that fast is pretty damn mind-blowing.

By Tim McLeod
Tags: Baseball Awards
This entry was posted on Sunday, December 26th, 2010 at 5:15 pm and is filed under BASEBALL, RotoRob, RotoRob Awards, Tim McLeod. You can follow any responses to this entry through the RSS 2.0 feed. Both comments and pings are currently closed.