Break out your tuxes and designer gowns, ladies and gentleman, as we’re back for the fifth annual gala that is the RotoRob Awards, handing out Fantasy awards to recognize great performers, stiffs and psychos alike. Strap yourself in and enjoy the ride. We kick off this year’s award ceremonies with our hoops hardware. 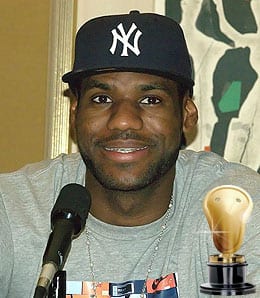 Okay, so LeBron didn’t take his talents to New York, but he’s still the King.

Oh man, this was really close, and was one of the toughest calls I’ve had to make in handing out this hardware, but for the second straight year, LeBron James takes home the coveted RotoRob Fantasy Basketball Stud of the Year Award. Like I said, this one was one of the tightest races in years, and several players deserved this recognition, but the fact that LeBron was the second-best player in Fantasy basketball last season, and he remains a top 10 talent this year cinched it for him. King James was beastly in 2009-10, playing heavy minutes in his final season as a Cav, setting career highs in FG percentage, treys per game, FTs per game and assists per game (8.6) while just missing out on his third 30 PPG season.

Moving to Miami and joining the Super Friends – as expected – has had an impact on LeBron’s numbers, but he’s shooting it better from downtown (34 per cent) and still piling up 24.5 PPG with over six boards and seven dimes per game. Not too shabby, kids.

Dirk Nowitzki – who simply never gets his Fantasy due – was neck and neck with LeBron for this award, but James won it based on his work last season.

Disco Dirk, Deron Williams (who has taken it to a new level this season), Amare Stoudemire (who has been the best forward in Fantasy basketball this season) and Kevin Durant (who was the top dog last season, but hasn’t quite lived up to his No. 1 overall status yet this season). Chris Paul deserves recognition as well, as he’s been the man this season, but because of his injury-filled campaign last year, he didn’t make the cut here.

Finally, let’s give a shout out to some of the most improved players in the first half of 2010-11, all of whom have become elite Fantasy talents: Raymond Felton, Russell Westbrook, Kevin Love, Rudy Gay and Wilson Chandler. 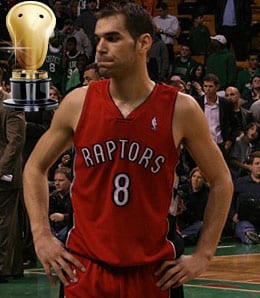 Jose Calderon got frustrated, as did those that used a high pick on him last season.

Last season, many expected Jose Calderon to take the next step and therefore used as high as a second round pick to land him. Well, the Spanish Fly failed to take flight, and he struggled through an awful season, again missing time with injury and ultimately losing his starting gig to Jarrett Jack. This season, Calderon is again dealing with injury issues and again lost his starting job to Jack. Jack has since been dealt, but Calderon still hasn’t gotten into a groove, and the horrible taste he’s left in the mouths of his owners earns him this dubious distinction.

Yao Ming (who again screwed owners that thought maybe, just maybe, he could stay healthy for once), Gilbert Arenas (who was stupid enough to bring a gun into the DC area and again proved fragile), Caron Butler (whose arrival in Dallas spelled the end of his elite Fantasy status), Rashard Lewis (who just keeps going downhill; remember when this dude was a stud?) and Brook Lopez (who sure looked amazing last season, but what the hell’s the dealio with him so far in 2010-11?). 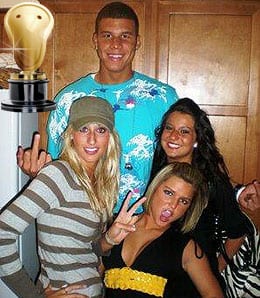 Blake Griffin lets us all know how he feels about being the Rookie of the Year.

After he missed the entire 2009-10, we had to wait quite some time for Blake Griffin to finally hit the court as an NBA rookie, but he’s made up for that this season by looking like a dominant big man – impressive for anyone, let alone a freshman. Twenty two double-doubles in his first 29 professional games? Uh yeah…he’s good. Sure, the FT percentage stinks, and you’d love to see more steals and blocks, but come on – this kid is freaking good. 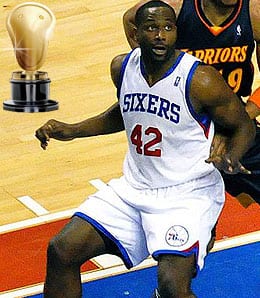 Remember when Elton Brand was staple in the first round of Fantasy basketball drafts? Well, he has never really been the same since rupturing his Achilles’ tendon – an injury that cost him most of the 2007-08 season. The next season, Brand wound up in Philly, and for the past two seasons, he struggled to find his way into the team’s offense. So far in 2010-11, however, Brand has experienced a major renaissance. While he’ll likely never be a 20-10 player again, his scoring is back up to 15 PPG and his rebounding has bounced back after a career worst showing in 2009-10. Better yet, he’s racking up steals at a higher clip than ever before, and his blocks and FG percentage are back up as well. Brand has been a major steal for owners that used a ninth round pick to grab him this season, as he’s been producing at a third round level. It’s a Brand new day, baby.

Amare Stoudemire (he’s healthy again, and is suddenly the top big man in the game), Kevin Martin (his scoring touch has returned this season and – knock on wood – he’s avoided injury so far) and Kevin Garnett (finally full healthy again, KG has found the fountain of youth so far this season). 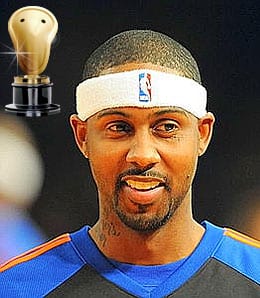 No, not that kind of double-double, we’re talking about double cream and double sugar, which is clearly the best Larry Hughes could muster with the Knicks in January. Midway through the month – after taking five straight DNP-CDs, Hughes protested by going through the pre-game workout with a coffee stirrer in his mouth. Hey Larry, how about a bear claw with that? Oh, never mind…I see from the box score that you’ve already put up a donut. 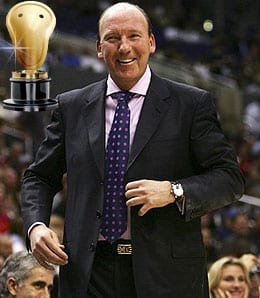 Coach Mike Dunleavy has been accused of many things over the years, but at least you can’t say he’s got a problem with pissing in public. When asked about JamesOn Curry’s arrest for doing just that in 2008 – which led to him being waived by the Bulls – the Clippers’ coach said he didn’t know anything about it. And apparently, Curry’s exploits weren’t an issue: “I don’t know the circumstances behind it,” Dunleavy said, “but I don’t think somebody urinating in public would be something that would keep me from picking somebody up.” Good to know, Mike. Of course, Dunleavy was…err…”relieved” of his duties just a couple of weeks after making his revealing proclamation. He was last seen lurking in an alleyway, sniffing the walls and muttering something about “that damn Donald.” 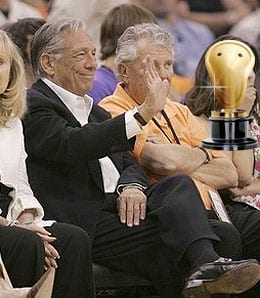 Speaking of that damn Donald, as in Los Angeles Clippers’ owner Donald Sterling (are we sensing a trend with this organization), while some people find Mark Cuban’s cheerleading rather grating, at least this is an owner that is genuinely behind his team. On the other hand, Sterling has recently been heard heckling during games…at his own freaking players! Both Baron Davis (who is certainly scorn worthy, we’ll give Don that much) and Chris Kaman have been the recipient of Sterling’s barbs from the stands. And don’t forget that a few years ago, Sterling was accused of making racist comments. Explain to me again why Los Angeles has made the playoffs just four times since Sterling bought the club in 1981? I wouldn’t be surprised if he talks trash when he goes to see his grandchildren’s school plays. What a douchebag. Smithers, release the hounds… 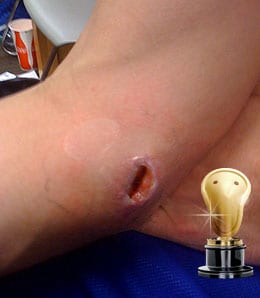 Hey! Has anyone seen my car keys? Oh, never mind…they’re in my elbow.

In November, Wilson Chandler’s teeth attacked David Lee’s elbow, and while Chandler needed four hours in the dentist chair to fix up his grin, it was Lee that took the worst of it, if you can believe it. You see, apparently Chandler has fangs where his teeth should be; how else can you explain a hole large enough to swallow up most of Rhode Island that formed in Lee’s elbow? Lee needed two surgeries and several different types of antibiotics to deal with his elbow hole. I wonder if he can use that opening to crack open a beer? Speaking of which, we received a TV remote control that’s fitted with a beer opener in the mail today. Seriously. More on that once we’ve had a chance to review our new toy.

Taking it in Stride Award 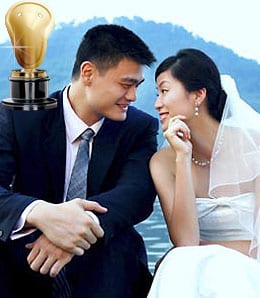 At least I still have you, honey. Now beer me, bitch!

Yao Ming, who missed all of last season because of injury and has again been knocked out for the 2010-11 campaign because of a stress fracture in his ankle, has every reason to be frustrated, bitter and depressed. So what’s he doing? Sitting back, cracking open a cold one and eating greasy food. “I haven’t died,” he said. “Right now I’m drinking a beer and eating fried chicken. What were you expecting, a funeral?” Um, apparently not, Yao. Beer and fried chicken? Hardly the diet of an athlete, but toss some gummy bears into the mix, and you’ve got yourself the Tim McLeod recipe for happiness.

By RotoRob
This entry was posted on Friday, December 24th, 2010 at 3:34 pm and is filed under BASKETBALL, RotoRob, RotoRob Awards. You can follow any responses to this entry through the RSS 2.0 feed. Responses are currently closed, but you can trackback from your own site.