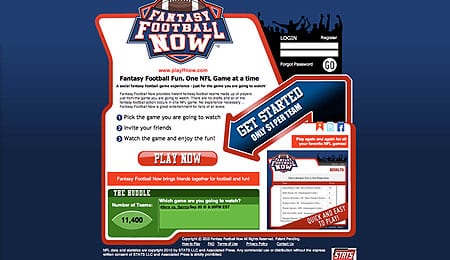 Fantasy Football Now may be just the ticket for getting your non-Fantasy playing friends into the game.

Part of the recent wave of “instant Fantasy sports” games, Fantasy Football Now tries to level the playing field for pigskin lovers by automatically assigning you a team of players from the game you plan to watch.

Here’s how it works: you choose a game that you are going to watch; invite a bunch of friends to play with you; and follow along online as the score for each friend’s team (auto picked by the site) is updated after each possession. It’s so easy that the people around you that can’t understand a damn thing about your Fantasy sports obsession may even get this. If this is unclear, here’s a video that demonstrates the game.

As mentioned, this is a big trend lately, as Fantasy sports providers are trying to cash in on the more casual fan that loves the game, but is not invested or willing enough to enter a full-season or keeper Fantasy sports league. Of course, the fact that your team is picked for you completely negates any Fantasy sports skill here – in theory, your Grandma’s team can kick your ass. Anyways, what is cool about this is that us hardcore Fantasy players can help people that are otherwise not that interested to dip their toe into the Fantasy waters and see what they think. It’s a good way to indoctrinate newbies in an environment that is not skill-dependant at all. Hey, you might even get your girlfriend to try this, and if she insists of wearing her cheerleader outfit while you’re watching the game together…well, all the better!

At any rate, we’ve got some free codes to offer a few of our lucky readers a chance to give this puppy a try. Here’s how to enter:

1. Scroll down to our comments section and tell us who you think the biggest surprise has been in Fantasy football so far in the 2010 season. That’s one entry.

3. Retweet this contest using the share tools below. That’s a third entry. (Again, let us know.)

4. Subscribe to our RSS feed (available in the top right of the page, under the “Follow RotoRob or Die” section) for a fourth entry. (And yes, you know the drill…give us the heads up that you’ve done so in the comment section.)

And there you go. The contest will run until Tuesday evening, giving the winners plenty of time to invite their friends to play in Week 15 for either the Thursday game, any Sunday contest or the Monday Night Football tilt. The winners will be sent information about how to sign up and try Fantasy Football Now for free.

By RotoRob
This entry was posted on Sunday, December 12th, 2010 at 12:08 pm and is filed under Contests, FOOTBALL, RotoRob. You can follow any responses to this entry through the RSS 2.0 feed. You can leave a response, or trackback from your own site.