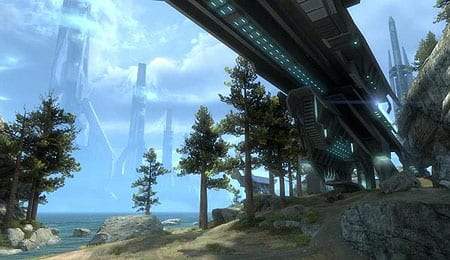 No other map in Halo: Reach looks remotely like the scenic Tempest.

One of the few criticisms in my initial review of Halo: Reach was the somewhat lean selection of multiplayer maps available at launch. Since that time, Bungie has dropped a handful of Forge World creations into the playlists to add more options, but those lacked the freshness factor that only truly new locations can produce. Enter the Noble Map Pack.

Released this week, Halo: Reach’s first selection of DLC contains three brand new adversarial settings for gamers to battle each other to the death. Priced at 800 MS Points (US$10), the Noble Map Pack introduces Breakpoint, Tempest and Anchor 9 to the fray while also allowing players to earn seven new achievements for a total of 250 Gamerscore.

The largest of the newcomers, Breakpoint adds the obligatory snow-based map that veterans of the series (read: me) have been missing. It elicits some flashbacks to Sidewinder/Avalanche, though this map has more structures and fewer wide open areas. There are lots of vehicles (banshees, warthogs, ghosts and wraiths) and heavy weapons available here, making for some massive firefights. Those that prefer a more covert approach should appreciate the multiple paths available, which allow you to move from one area of the map to the other with limited exposure to enemy artillery.

Given its size, this map is best suited for 16-player games, though the 12-player DLC playlist can still get pretty hectic. One thing I have noticed about Breakpoint is that it seems prone to lopsided games. Now, clearly, player skill/familiarity is a factor, but the general rule seems to be that whoever wins the initial banshee fight is positioned to dominate — particularly if you can’t snag the Spartan Laser as the horseshoe shape of the map allows the banshee to escape ground fire quickly. Once aerial supremacy has been achieved, snipers can gather on the mountain path that splits the map, giving clear lines of sight and making it tough for the other team to rally.

Of the three maps this is the only one that’s location isn’t based on the campaign, making it stand out immediately. It’s fairly symmetrical with bases on each side and an open region in the middle that serves as a meeting point for opposing forces. Ground-based vehicles (warthogs and mongooses) are present and skilled warthog tandems can rack up kills by circling the map with speed as the dips in terrain help when evading fire. Man cannons return to launch players across the map from four different spots with the two primary ones depositing gamers at identical machine gun nests overlooking the centre.

Supporting both 8- and 16-player games, Tempest is easily my favourite map from a visual perspective. The trees, rocks and waterfalls make for what would be a serene spot under other circumstances, and the way that nature is reclaiming the technology with weeds popping up is a cool touch. For combat I think it strikes a nice balance by allowing two distinctly different styles of play. Strategic players are presented with lots of opportunities to use the natural cover for tactical advantage. Conversely, the aforementioned middle ground is also available for more aggressive gamers to simply meet and exchange fire.

Seen from space during the Halo: Reach campaign, Anchor 9 takes us inside the orbital station for some good old-fashioned close quarters combat. The spawn areas are identical on either side of the map with a centrally located hanger bay. Machines and stairwells provide cover, but it’s built for rapid movement and sweeping through areas rather than camping or taking cross-map potshots with the DMR. Escape routes are plentiful, sometimes making it tough to finish off savvy opponents. Also, those that zoom in with their weapons may find themselves getting assassinated given the small area and numerous outlets for enemies to approach from.

Where things get even more interesting is the reduced gravity areas outside the main hanger, which allow quick travel back and forth without the threat of gunfire from within. A rocket launcher located in the middle section of the exterior is one of the map’s most desirable prizes along with the shotgun. It feels a bit overcrowded with 12 players, but once it settles into regular Slayer and Team SWAT playlists, the mayhem should give way to up-tempo matches that favour steady aims under fire.

Even though Halo: Reach is less than three months old, it felt like it needed a shot in the arm. And that’s exactly what the Noble Map Pack provides. The additions are all strong efforts that feel different than anything available at launch. If you’ve drifted away recently, the Noble Map Pack is the perfect excuse to jump back in.