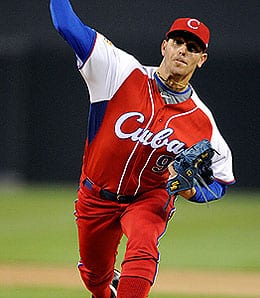 Yuniesky Maya will make his first MLB start on Tuesday.

Another season is winding down and now is the time for that final push to secure the ultimate prize, your league championship. I want to thank all our loyal readers and hope over the past six months with my weekly waiver wire column that I’ve been able to provide some help to you as you’ve shaped and moulded your Fantasy squads into winners. I wish good fortunes to all our readers as you wrap up the final month of the 2010 season.

And now, here are our picks of the week:

Yuniesky Maya, SP, Washington Nationals: The former top pitcher in the Cuban League is scheduled to make his debut Tuesday against the Mets. In two starts at Triple-A Syracuse, he’s sporting a phenomenal 0.87 ERA and has struck out nine in 10 1/3 IP. Not too bad for a pitcher who took a year off between starts while getting his immigration situation resolved. The Nats have rushed Maya through three levels in the minors and so far the results have been very good. Just remember, he’s scheduled to face the Braves and Phillies after the Mets, so this is definitely a baptism by fire for him.

Clay Hensley, RP, Florida Marlins: The Marlins have tired of watching Leo Nunez struggle, so have moved Hensley into the closer role — at least on an interim basis. In 60 2/3 IP, Hensley has allowed only 46 hits, 23 walks, and has struck out 66 in compiling a great 2.67 ERA and 1.14 WHIP. He’s been a model of consistency in a setup role and is a solid option for those Fantasy players struggling for save opportunities in September.

Danny Espinosa, SS/2B, Washington Nationals: Adam Kennedy has proven he’s not the answer, so expect the Nats to give Espinosa some serious playing time down the stretch. At two levels in the minors, the 23-year-old phenom slugged 22 homers, drove in 69 runs and stole 25 bases. What is most impressive is that when promoted to Triple-A, Espinosa not only didn’t skip a beat, but he actually improved his overall numbers. He’s definitely a player that should be on your radar looking forward to 2011.

Other Options to Consider

Brandon Allen, 1B, Arizona Diamondbacks: Arinzo’s first baseman of the future will get an extended look this month and we’ve already seen his power potential after he smacked a frozen rope grand salami against San Diego’s Luke Gregerson Wednesday. Allen should be owned in all formats for the stretch run.

Freddy Sanchez, 2B, San Francisco Giants: In his past ten games, Sanchez is 16-for-37 with nine runs and he’s currently hitting in the two hole. He’s a solid option for Fantasy players in tight races in the BA category.

Chris Narveson, SP, Milwaukee Brewers: He’s coming off back-to-back great starts in which he posted a combined 14 strikeouts. Sure, he’s a gamble, but if you’re looking for a pitcher to stream Narveson is hot and has the potential to provide short-term rewards.

Jim Thome, DH, Minnesota Twins: Congratulations to Thome, who on Saturday passed Mark McGwire and moved into ninth spot on MLB’s all-time home run list. Thome has smoked 20 homers in just 237 at-bats and, despite his wonky back, has the potential to be an asset in the power categories in September.

Daric Barton, 1B, Oakland Athletics: In his past ten games, Barton is batting .310 with three homers, five RBI and tens runs. He’s a definite asset in the runs scored category over the final month.

Russell Branyan, 1B, Seattle Mariners: If BA is not a concern, Branyan will at least hit some big flies for you. Starting the all-or-nothing Branyan against right handed pitching could be a solid plan if you’re in a tight race in the homer category.

Brad Davis, C, Florida Marlins: John Baker needs Tommy John surgery, Ronnie Paulino is facing a drug suspension and Brett Hayes was toasted by Nyjer Morgan and landed on the DL. This leaves Brad Davis as the man behind the dish in Florida, so if you need to fill a hole at catcher, rest assured that he will get playing time. He did manage to hit nine homers and drive in 34 runs in 255 at-bats at Triple-A New Orleans.

Freddie Freeman, 1B, Atlanta Braves: Derrek Lee is hurting so we might get to see 20-year-old phenom Freeman display his wares this month. He should be owned in all keeper formats.

Jeremy Hellickson, SP, Tampa Bay Rays: Jeff Niemann is lobbying very hard to see Hellickson re-inserted in the rotation and with the Rays in a heated race it is a very real possibility. Hellickson is currently owned in 47 per cent of CBS leagues, so there might be an opportunity to upgrade your starting pitching for the final weeks of the season.

Aroldis Chapman, RP, Cincinnati Reds: Chapman is fun to watch, throws an amazing slider, and hits triple digits every other pitch, but realistically unless you’re playing in leagues where holds come into play or strikeouts are incredibly tight his value to most Fantasy teams will be minimal. In re-draft leagues, let someone else overpay for his amazing skill set.

By Tim McLeod
This entry was posted on Sunday, September 5th, 2010 at 1:12 pm and is filed under BASEBALL, The Wire Troll, Tim McLeod. You can follow any responses to this entry through the RSS 2.0 feed. You can skip to the end and leave a response. Pinging is currently not allowed.