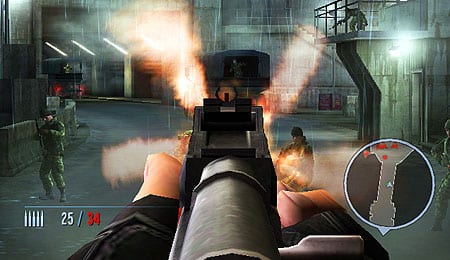 Do you think Bond comes up with his witty post-kill comments on the fly?

Like the last Wii game I played, GoldenEye 007 has its roots on a previous generation console. In fact, the Nintendo 64 version of the same name is considered by many to be the preeminent first-person shooter of its time. On a personal level, it’s the first title I can recall my friends and I extensively playing competitive multiplayer on. Tasked with modernizing a classic, Activision stepped up to create a game that pays homage to the original while surpassing it in many respects.

Supporting both the Wiimote and Classic controllers (as well as the Zapper), GoldenEye 007 handles well when compared to other Wii titles, but its dual analog sticks aren’t as responsive as what you find on the Xbox 360 or PlayStation 3. They feel just a little imprecise, primarily when aiming down sight, which caused me to keep the game’s snap-to feature (AKA, auto-aim) turned on. For its part, the Wiimote was surprisingly solid, even offering an option to lean out of cover that wasn’t available with other setups, but my years of playing shooters conventionally made it feel foreign.

I did have some other issues, mostly related to the melee button, but to be fair I was playing with the Classic controller and not the Classic Pro some editions come bundled with — the primary difference between them being dual shoulder buttons on the Pro, which the Classic did not have and was the source of my trouble.

There’s a reason the phrase “gritty realism” never gets mentioned in the same sentence as the Nintendo Wii, and although GoldenEye 007 pushes the system’s graphical capabilities, it’s not going to compare to Halo: Reach or Call of Duty: Black Ops. You never feel like you’re shooting real people, even though the animations are quite good, and there’s a decidedly throwback vibe. Enemies appear out of thin air, no blood is spilled and dead bodies vanish almost instantly. This is a first-person shooting “game” that doesn’t strive to shock with realism, which I found surprisingly refreshing.

Aside from quality character animations, the level design is also quite good, offering multiple paths to explore and a variety of locations from bleak snow-filled areas to lush jungles. There are also dynamic weather effects and partially destructible cover. With so much going on, however, the Wii struggles to keep pace at times, leading to some significant dips in the frame rate.

The voice acting, highlighted by work from Daniel Craig and Judy Dench, is top notch and gives the game some continuity with the current generation of Bond films. Weapon effects are generally first rate, though it’s a bit strange to hear the reloading sounds and isolated dialogue come out of the tiny speaker on the Wiimote instead of through the television speakers. The soundtrack is strong, and I particularly enjoyed the new theme song, which is vintage Bond.

As you’ve probably figured out by now, this version of GoldenEye 007 kicks Pierce Brosnan to the curb in favor of Craig, who has brought a much more physical approach to the character. The insertion of Craig into the role necessitated a domino effect that has many key elements from the film being reworked to fall in line with his portrayal of Bond. Some characters have been recast (sorry, Sean Bean) while others have been completely removed. The result is a more aggressive take on the source material, though it still retains the tongue-in-cheek charm of 007.

Those that consider the N64 version as sacred ground might take issue with the changes as Activision’s re-imagining takes some liberties with the original game (quick time events and on-rails shooting sequences, anyone?), but I would suggest that those that do are merely viewing the old game through nostalgia filled glasses. The remake cranks up the intensity a few notches and has the feel of a Triple-A release, not a money grab.

One of the more significant changes sees GoldenEye 007 adopt the current industry standard of allowing health to regenerate when not under direct fire as opposed to the health meter of the original. The game does feature a difficulty setting that re-implements that system, though only the truly skilled will be able to navigate the game’s entirety that way.

GoldenEye 007 isn’t a long game, but it feels about right given the pacing. What does extend the single player are the additional difficulty settings, which require you to complete secondary objectives that add time to each level, as well as having multiple paths to a goal. Plus, the game allows many sections to be done either with stealth or all-out guns blazing. I preferred the former in trying to embrace Bond’s MI-6 training, though mowing down a stream of enemies is satisfying as well.

Enemy A.I. alternately made my task too easy or too hard as sometimes foes are seemingly oblivious to your presence while others would appear to have bionic senses. This can lead to some frustrating moments, such as when I was infiltrating a meeting point. I climbed a ladder onto a roof, subdued a sniper, took his silenced rifle and dropped three armed guards to clear a path. I drop down and start walking toward the vacated section when a hostile inside of a building announces, “I hear footsteps,” triggering an alarm and a massive firefight.

When the bullets start flying, enemies do a respectable job of ducking into cover with some even rolling or diving behind objects. They do definitely follow set patterns, however, and since this game spawns enemies you’ll see cookie cutter baddies running into the same spots where you killed one of their fellow henchmen moments early. Also annoying is that when an alarm is set off, enemies will literally appear from nowhere, sometimes in spots that essentially doom you to instant death.

Of course, what made GoldenEye 007 a transcendent title over a decade ago wasn’t the story, it was the multiplayer, and that aspect has been handled with care. Some modern elements have been added such as eight-player online joining the classic four-player local multiplayer. I haven’t done a ton of online gaming with the Wii, but this runs fairly smoothly and better than other games I’ve tried.

However, one major issue is the lack of host migration, which means too many games end with the words, “The Host has quit,” across the screen. If you’re rolling along and racking up the experience points it can be pretty infuriating to see that all go up in smoke. The lack of voice communication is also a misfire, especially given some of the tactical game modes (Black Box being the best) available.

Despite those issues, GoldenEye 007 adds a lot of value with its multiplayer offerings. The leveling system is heavily influenced by Activision’s juggernaut Call of Duty series, and it’s a proven formula that keeps gamers invested. Game modes are fun and varied, and Activision has done a nice job of updating the presentation without removing the feel that’ll be instantly recognizable to old-school gamers. Yes, it’s had a facelift, but at its core it’s still the game I spent hundreds of hours playing against friends in a crappy one-bedroom apartment.

Will the Nintendo Wii version of GoldenEye 007 have the same impact on gaming as its Nintendo 64 counterpart? No. Quite simply, gaming has advanced too much since then. However, that doesn’t mean this isn’t a damn good game and a worthy pseudo-successor. Fans of the original would do well to pick up the reboot and enjoy the ride.

By Herija Green
This entry was posted on Tuesday, November 23rd, 2010 at 5:04 pm and is filed under Herija Green, Video Game Reviews. You can follow any responses to this entry through the RSS 2.0 feed. You can skip to the end and leave a response. Pinging is currently not allowed.