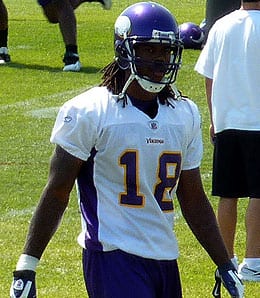 Sidney Rice has been slow to recover from hip surgery, but could play Sunday.

The Minnesota Vikings have dropped three of their last four games to work themselves into a must-win situation at home Sunday against the Packers. The fact that Pro Bowl wide receiver Sidney Rice (hip surgery) may return this weekend – depending on how he feels in practice – could be a big boost to a passing offense that has been much worse than most expected (Minnesota currently ranks 18th in passing yards per game). Rice is likely still available in your league, but as we draw closer to Sunday, that could change very quickly, so if you need WR help, it may be worth taking a gamble that he’ll play, although it’s also worth noting that the Green Bay pass defense is solid, so if you prefer to take a flier on someone you know is going to play, we totally understand.

Another loss to Green Bay would drop the Vikings four games back of the co-division leaders, and pretty much end any hopes that 41-year-old Brett Favre will get to another Super Bowl before he packs it in. Oh, the irony…

The New York Jets are squeaking by lately, but wins are wins, and despite the recent close calls, they’re still tied for the lead in the AFC East and for the best record in the NFL. The Jets’ offense has been much improved this season, and as people clue in to this, placekicker Nick Folk is starting to get some Fantasy love. Okay, he struggled on Sunday, missing three of five field goal attempts, but the key takeaway here is that he continues to get plenty of chances, enough that he’s currently ranked sixth in scoring with 74 points.

Remember that in 2008, Folk delivered top ten value at his position, so while his final season in Dallas last year was quite forgettable, he has produced before.

While the Jets are pulling games out of the fire, Houston has dropped three straight, the last two by a combined 13 points, as its fast start to 2010 is but a memory now. Poor Glover Quin. The Houston cornerback had a season-high 13 tackles in the Texans’ loss Sunday, but all anyone will remember is that he knocked a Hail Mary pass right to Jacksonville’s Mike Thomas for the game-winning touchdown. Oops. Well, at least Quin has been added to Thomas’s Christmas card list.

So, I guess the big Sunday night showdown between the Steelers and Patriots didn’t exactly go as Pittsburgh planned, huh? In fact, the 39-26 loss marked the worst home defeat the Steelers have suffered since 2006. On the plus side for Pittsburgh, safety Ryan Clark was busy, tying his season high with nine tackles – five solo and four assisting. The veteran has gained some traction on the waiver wire this week, although he may not be as active this week against a weak Raider pass offense. Having said that, what’s going on with the Steeler pass defense lately? It’s been one of the worst in the NFL over the last month.

The Raiders, by the way, have won four straight to gain a share of the AFC West lead, and don’t forget that when they sucked last year, they still pulled off a massive upset at Heinz Field, so don’t count them out of this game completely (I might be inclined to take Oakland to beat the seven-point spread in this one). If for some reason you haven’t dumped QB Bruce Gradkowski yet, go ahead and cut bait; he hasn’t sniffed the field since the Raiders started their winning streak, so Jason Campbell will continue to man the position for the time being.

The Ravens sure suffered a tough setback last Thursday, but what a break they get this week as they get to visit Carolina, losers of three straight games and a team racked with injuries. John Harbaugh’s team has some work to do as it tries to take over the lead in the AFC North, and a win Sunday over the hapless Panthers would be a good start. Questions persist about whether Baltimore still has an elite defense, and this unit has been especially vulnerable through the air compared to last season. Yet, the Ravens continue to win, having taken three of their last five games with a pretty easy one on tap this weekend.

For what it’s worth (not much), Carolina coach John Fox says he has “all the respect in the world for the Baltimore defense.” Well, of course he’s going to say that. Besides, given that he’s coaching a 1-8 team that has only scored nine (!) touchdowns all year – the worst in the NFL — he pretty much has to respect any opponent.

The Jags’ biggest issue, of course, has been finding a quarterback that can stay healthy. Effective would be nice, too, but they’ll take what they can get at this point. The team has already lost starter Matt Moore for the season to a shoulder injury. Rookie Jimmy Clausen, who actually looked better in Sunday’s loss in Tampa Bay, suffered a concussion and he’s unlikely to play against B-More.

This leaves the QB job to either rookie Tony Pike – who saw his first action in Week Nine – or Brian St. Pierre, a veteran benchwarmer that was signed to the practice squad last week. Yikes!

If you are in a seriously deep league, Pike might be worth a pickup, but considering how inexperienced he is as a drop back passer, it’s hard to imagine him having much success even with the Ravens’ pass defense struggling lately. Take a pass on this passer.

By RotoRob
This entry was posted on Thursday, November 18th, 2010 at 3:08 pm and is filed under FOOTBALL, Pigskin Points, RotoRob. You can follow any responses to this entry through the RSS 2.0 feed. You can skip to the end and leave a response. Pinging is currently not allowed.