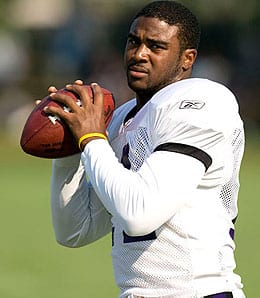 Troy Smith has won both his starts as QB of the 49ers.

We can’t start this week’s column without first giving a shout out to Michael Vick for that amazing performance in Monday’s game against Washington, as he totaled six touchdowns by himself (four passing, two running). As for the standings, the Patriots, the Falcons, and the Jets are tied, each with a league best 7-2 record, closely followed by many teams.

Biggest Drop: The Giants dropped four spots from fourth to eighth after losing to division rivals, the Dallas Cowboys.

1. (6) New England Patriots, 7-2: What a perfect time for Tom Brady to have his biggest game of the season, totaling four touchdowns Sunday. The Patriots hope to continue rolling with their new momentum as they face the Colts, a matchup fans look forward to every year.

2. (3) Atlanta Falcons, 7-2: The Falcons are coming off a huge last-minute win over Baltimore and Matt Ryan and Roddy White are in great sync as they travel to St. Louis where they should thrive.

3. (5) New York Jets, 7-2: The Jets earned their second straight overtime win thanks to Santonio Holmes. But I think their best effort came from Jerricho Cotchery, who after pulling his groin and hopping in severe pain, continued to get open and made a great diving catch for a first down in OT.

4. (1) Baltimore Ravens, 6-3: Coming off a close loss, the Ravens travel to Carolina where they’ll come out firing on all cylinders. Derrick Mason only needs three more catches to join the 900-reception club, something he should accomplish on Sunday.

5. (2) Pittsburgh Steelers, 6-3: Mike Wallace has 13 receptions for 246 yards and three touchdowns in the last two games. He faces Oakland on Sunday, and with Raider cornerback Nnamdi Asomugha’s status up in the air, Wallace should be a very deep threat for Big Ben Roethlisberger.

6. (8) Philadelphia Eagles, 6-3: Michael Vick could have just guaranteed his starting job for possibly the rest of his career. But first let’s see how he plays against the a tough Giants’ defense on Sunday night.

7. (7) Green Bay Packers, 6-3: The Packers are well rested after their bye week, and head into this weekend with a three-game winning streak. Now they have a chance to beat Brett Favre for a second time this season in what will most likely be his last game against Green Bay.

8. (4) New York Giants, 6-3: After losing to the Cowboys at home, the Giants have to prepare for the Eagles and Vick, who is coming off the best game of his career. Eli Manning will have to limit his interceptions in this one.

9. (9) New Orleans Saints, 6-3: A matchup against Seattle in the Superdome should be no match, but the Saints are only 3-2 at home this season. If they get Reggie Bush back this week he will be a significant help to Drew Brees as he tries to pick apart the Seahawk defense.

10. (10) Indianapolis Colts, 6-3: The annual showdown of Peyton Manning vs. Tom Brady has arrived. The Colts’ defense was instrumental in Sunday’s win over the Bengals; can they do the same this weekend against the Patriots? Let’s not forget last year’s fourth and two play.

11. (13) Tampa Bay Buccaneers, 6-3: The Buccaneers continue to win and are just one game behind division leading Atlanta, but they have yet to beat a team over .500. On Sunday, Josh Freeman will take the Bucs to San Francisco where LeGarrette Blount will be the difference maker.

12. (12) Oakland Raiders, 5-4: Coming off their bye week, the Raiders have had lots of time to prepare for their game in Pittsburgh, but this could be the team’s most difficult challenge of the year. Jason Campbell was named the starter; will he lead Oakland to a fourth win in a row?

13. (11) Tennessee Titans, 5-4: Randy Moss made little impact by himself, but his presence was felt as the double coverage helped Chris Johnson run free. But with or without Moss, the problems at quarterback can cost them the Titans a playoff spot.

14. (14) Kansas City Chiefs, 5-4: Despite huge numbers from Matt Cassel and Dwayne Bowe, the Chiefs had no chance against the Broncos after they fell behind 35-0 in the second quarter. However, they should have a much better game against the struggling Cardinals’ defense next week.

15. (17) Miami Dolphins, 5-4: The Dolphins lost both Chad Henne and Chad Pennington this week, yet Tyler Thigpen led them to their first home victory of the season. A short week brings the Bears to Miami where Thigpen will look to guide the team to a second home win.

16. (16) San Diego Chargers, 4-5: Only one game back of the Raiders and Chiefs in the AFC West, the Chargers rested up their injured players during their bye week and will now face Denver on Monday night. If San Diego’s usual second half surge returns, this team can win the division again. Philip Rivers should continue his recent excellent play against a Bronco pass defense that’s not very good.

17. (15) Chicago Bears, 6-3: Da Bears’ defense came up strong against the Vikings. holding Adrian Peterson to 51 yards on 17 carries. Now Chicago looks to take the lead in the NFC North as it faces the Dolphins’ third string quarterback on Thursday night.

18. (20) Jacksonville Jaguars, 5-4: After a huge Hail Mary miracle win, the Jags trail the Colts by one game and next up they face the Browns, who have been playing well lately. It’s pretty shocking that the Jaguars have a winning record considering they’ve had their asses kicked in each of their losses and their defense is awful.

19. (15) Houston Texans, 4-5: After three straight losses, you would think the Texans would get a break, but no dice: Houston’s schedule is doomed with six of its final seven games against teams with winning records. The Texans need to figure out how to win the close games if they’re going to turn their season around.

20. (24) Seattle Seahawks, 5-4: The Seahawks’ sweep of the Arizona Cardinals made Pete Carroll the first Seattle coach to win at the University of Phoenix Stadium. However, maintaining the division lead won’t be easy with a game in New Orleans this weekend.

21. (18) Washington Redskins, 4-5: Washington had a poor showing against the Eagles as Vick picked apart the Redskins’ defense with his arm and his legs. Donovan McNabb has a new contract, but he can still be cut or traded at the end of the season without penalty and without his money.

22. (21) St. Louis Rams, 4-5: Despite a great performance by Steven Jackson, the Rams suffered a very tough overtime loss to a division rival as the secondary let them down. Sam Bradford will try to help the team turn it around, but he’ll have to knock off one of the NFL’s best teams as the Falcons come to town.

23. (23) Cleveland Browns, 3-6: The Browns are playing exceptionally well lately and almost defeated another top team. Colt McCoy’s next mission is to take the Jaguars out of the playoff hunt.

24. (22) Minnesota Vikings, 3-6: The Vikings are built to win now, but are not winning now, having dropped to 3-6 after getting hammered by the Bears this week. On the plus side, at least Adrian Peterson has yet to fumble this season.

25. (29) San Francisco 49ers, 3-6: The 49ers have won three of their last four games, including the past two with Troy Smith at the helm. Their next game is in Arizona where Smith and Frank Gore hope to keep their playoff hopes alive.

26. (28) Denver Broncos, 3-6: After dominating the Chiefs on Sunday, the Broncos face San Diego for the first time this season and a win can keep them in the hunt for the AFC West division. Brandon Lloyd leads the league with 968 receiving yards on 48 receptions with six touchdowns.

27. (25) Arizona Cardinals, 3-6: Arizona’s defensive problems continue to be a concern, especially with one of its harder games of the season coming up Sunday in Kansas City. The fact that Chief coach Todd Haley knows the Cardinal offense inside out isn’t going to make this must-win game any easier.

28. (26) Cincinnati Bengals, 2-7: The Bengals face Buffalo Sunday as they look for their third win of the season. The Bengals turned it over five times against Inday; if they can limit the giveaways against the Bills, they can get back in the win column.

29. (30) Dallas Cowboys, 2-6: In his first game as the Cowboys’ interim coach, Jason Garrett earned a W, against the Giants to boot. Dez Bryant seems to be the number one receiver on the team with Jon Kitna at the helm.

30. (32) Buffalo Bills, 1-8: Finally, the Bills earned their first win of the season; many props to Fred Jackson for helping bring Buffalo a victory.

31. (27) Detroit Lions, 2-7: The Lions’ lack of a running game is leading to one loss after another. Detroit visits Dallas this week, and something’s got to give — either the Lions end their NFL record 25-game road losing streak or the Cowboys finally win a game in their shiny, new stadium.

32. (31) Carolina Panthers, 1-8: In hopes of winning more games, the Panthers signed Brian St. Pierre. The Cats’ next game is against Baltimore, so they’ll need all the luck they can get.

By Trevor Blake
This entry was posted on Wednesday, November 17th, 2010 at 6:33 pm and is filed under FOOTBALL, NFL Power Rankings, Trevor Blake. You can follow any responses to this entry through the RSS 2.0 feed. You can leave a response, or trackback from your own site.