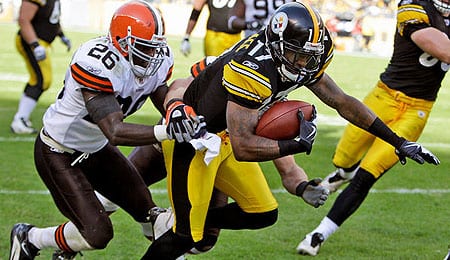 Mike Wallace is scoring on some serious long bombs this season.

The Patriots have been knocked off the top, and the Ravens have emerged as the new top team. Thursday night football begins this week with a big matchup of Baltimore at Atlanta.

Matchups of the Week: Baltimore vs. Atlanta on Thursday Night Football, New England vs. Pittsburgh

1. (3) Baltimore Ravens, 6-2: The Ravens have won both games since Ed Reed came back, and he already has three interceptions. It will be a tough matchup after a short week of practice; however, they should rely on Ray Rice to help get another win.

2. (2) Pittsburgh Steelers, 6-2: The Steelers face the Patriots on Sunday night for a possible lead in the AFC; will Mike Wallace and Rashard Mendenhall continue their shining performances this season and provide enough offense to win?

3. (6) Atlanta Falcons, 6-2: When one top player is gone (Roddy White), another bright spot emerges with Michael “The Burner” Turner having a big game. Matt Ryan will need White healthy for Thursday’s game, as a fourth and goal stop my not be enough to beat the Ravens.

5. (4) New York Jets, 6-2: A close call in Detroit has left some skeptical about the Jets, but perhaps getting this win out of their way acts as a big enough confidence boost to beat the Browns while they are on a hot streak. New York will need to utilize LaDainian Tomlison and Shonn Greene more.

6. (1) New England Patriots, 6-2: What a stunner! And now the Pats have a tough assignment as they looking to bounce back in Pittsburgh Sunday night in what could be a potential playoff preview. Bill Belichick better get his team motivated for this huge matchup.

7. (8) Green Bay Packers, 6-3: The Packers are beginning to run the ball better which is taking more pressure off Aaron Rodgers who had a valiant effort in their blowout win over Dallas. They head into their bye week on a three-game winning streak before heading to Minnesota.

8. (12) Philadelphia Eagles, 5-3: Michael Vick is back in town and tearing up the backfield with DeSean Jackson and LeSean McCoy. The Eagles face Washington on Monday night.

9. (10) New Orleans Saints, 6-3: After the Saints put a beat down on division rival Carolina, they move into their bye week on a good note before playing Seattle. The defending Super Bowl champs haven’t looked as dominant, but they are in fine shape, so there’s no reason for panic.

10. (5) Indianapolis Colts, 5-3: Injuries has been a problem, but the Colts play the troubled Bengals this week presenting a great opportunity to get back on track. Indy, averaging only 92.3 rushing yards per game, needs to find a solid running back to help Peyton Manning.

11. (9) Tennessee Titans, 5-3: Now we can see if the addition of Randy Moss will actually help this team or not. Unbelievably, this will be Moss’s third team in six weeks.

12. (16) Oakland Raiders, 5-4: The Raiders are going into their bye at a perfect time; after beating the Chiefs in OT thanks to Sebastian Janikowski (who is kicking ass in kicker scoring), they are 3-0 in their division and have a winning record. They will need the extra time to prepare for their next game in Pittsburgh.

13. (14) Tampa Bay Buccaneers, 5-3: LeGarrette Blount failed to punch it in on the final fourth and goal play from the one yard line, however, the Bucs have an easier matchup against the lowly Panthers this week where he’ll have a chance to atone.

14. (11) Kansas City Chiefs, 5-3: The Chiefs have a favourable schedule the next four weeks, playing Denver, Arizona, Seattle, and Denver again. The top-ranked running team can prevail during this stretch behind Jamaal Charles and Thomas Jones.

15. (13) Houston Texans, 4-4: The Texans’ defense is last in opponent passing yards, which could cost them any hopes of making the playoffs. Arian Foster continues to surprise me week in and week out, running over multiple teams.

16. (22) San Diego Chargers, 4-5:  Lets see if the Chargers can make their usual late season push for the division, riding a two-game win streak into their bye week behind Philip Rivers’ arm.

17. (15) Miami Dolphins, 4-4: The Dolphins need to get their running game going more in order to help Chad Henne, who threw three interceptions on Sunday.

18. (18) Washington Redskins, 4-4: Things started out well for this team, but I’m not sure what is going on now and Donovan McNabb looks to be gone after this season.

19. (17) Chicago Bears, 5-3: Almost losing to the worst team in the league brought more skepticism about how well this team will do. This week, the Bears play Minnesota, which is fresh off a huge overtime win. Matt Forte is still only averaging 3.9 yards per carry and has yet to reach 500 rushing yards.

20. (19) Jacksonville Jaguars, 4-4: Let’s see if David Garrard can pull another Pro Bowl performance out of his ass against the Texans this week.

22. (23) Minnesota Vikings, 3-5: What a comeback by the Vikings, who got excellent efforts from several players such as Percy Harvin, who was playing hurt. Brett Favre threw for 446 yards, unbelievably a new career high after 20 seasons.

23. (26) Cleveland Browns, 3-5: In his last two starts, rookie QB Colt McCoy has beaten Drew Brees and Tom Bradym with much help from the dominating Peyton Hillis.

24. (20) Seattle Seahawks, 4-4: It doesn’t look like Charlie Whitehurst will be able to lead this team to a division title, but Seattle is still very much alive.

25. (24) Arizona Cardinals, 3-5: After two disappointing three-point losses, the Cardinals’ season remains in question, so they need to come up big this week at home against the Seahawks. A win Sunday could give Arizona a share of the division lead depending on how the rest of the tight NFC West fares this weekend.

26. (25) Cincinnati Bengals, 2-6: The Bengals almost won that game against the Steelers on Monday night, but almost is not good enough and this team has now dropped five straight. At least Terrell Owens is having a career year.

27. (27) Detroit Lions, 2-6: Matthew Stafford is back on the bench after suffering another injury. The Lions had another close game, but failed to pull out the win after having the lead. Perhaps they will have more luck in Buffalo on Sunday.

28. (28) Denver Broncos, 2-6: A win on Sunday over the Chiefs could spark this team’s season, however, the Broncos will need a running game if they want to resurrect their chances.

29. (20) San Francisco 49ers, 2-6: With Troy Smith at the helm, and the team coming off a win before their bye week, Smith has had time to get in rhythm with the starters while the 49ers prepared for a visit by the Rams.

30. (29) Dallas Cowboys, 1-7: Wade Phillips is gone and Jason Garrett is the interim head coach. Will he get enough wins this season without Tony Romo to keep his job?

31. (31) Carolina Panthers, 1-7: The Panthers are another team that suffers from injuries and needs a new quarterback after Jimmy Clausen has been a bust this season.

32. (32) Buffalo Bills, 0-8: The Bills have lost each of their last three games by three points, two of which were in overtime. Will a visit from Detroit on Sunday be the day they finally get their first win of the season? The Bills are halfway to joining the 2008 Lions as the NFL’s only teams to go winless; how bad do you think Detroit would like to see that happen?

By Trevor Blake
Tags: NFL
This entry was posted on Wednesday, November 10th, 2010 at 6:17 pm and is filed under FOOTBALL, NFL Power Rankings, Trevor Blake. You can follow any responses to this entry through the RSS 2.0 feed. Both comments and pings are currently closed.