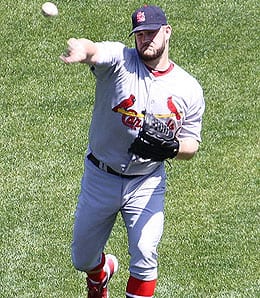 Brad Penny’s oversized frame is being taken off the market.

It’s been a couple of years since we trotted out Squeeze Play, our gossip column about athletes that date/pork celebs (and an opportunity for us to get even more catty than usual), so it’s high time to scour the streets for salacious goodies to offer our readers.

First off is news that St. Louis Cardinals pitcher Brad Penny plans to give up his bachelor ways as he’s become engaged to Karina Smirnoff, who is apparently famous because of Dancing with the Stars, a show I’m happy to report have never seen and am somehow more inclined to never watch based on this news. Why? Well, because that’s the kind of guy I am. Besides, Smirnoff was recently eliminated from the show, which actually means she has plenty in common with Penny as he suffered a strained lat in May and somehow never made it back to the bigs, essentially eliminating himself from the Cardinal rotation.

I guess they both have plenty of spare time these days. And at least we don’t have to wonder who will be pitching and who will be receiving in this relationship.

A-Rod and Cameron Diaz Strike Out

The rumours have been circulating for awhile, but now that Life & Style has confirmed it we can end the speculation: the relationship that was Alex Rodriguez and Cameron Diaz has officially been tagged out. They’ve been dating for seven months, but one source indicated that A-Rod “just doesn’t like her anymore.” Zing! Poor Cameron…maybe she needs some consoling. Just give RotoRob a call, sugar. We’ve got a shoulder for you to cry on. Don’t be shy.

Apparently Cameron Diaz isn’t the only thing Rodriguez doesn’t like anymore, judging by his lack of hitting in the playoffs (.219, no homers). He finally got his playoff mojo in 2009, and poof! Just like that, it’s gone again.

While we don’t normally cover tennis, Mark Philippoussis’s exploits – at least off the court – deserve a mention. Injury issues and a perceived lack of desire prohibited the tall Aussie from reaching his tremendous potential as a tennis star, but that didn’t stop him from a string of celebrity hook-ups off the court. At one point, Philippoussis was dating singer Delta Goodrem, but that relationship hit the skids when Paris Hilton entered the picture. It’s unclear if his career fizzled because of the wounds he suffered when Hilton’s Chihuahua jumped out of her purse and attacked him. Hilton, of course, has also been linked to other athletes such as boxer Oscar de la Hoya. No word how he fared with the dog, though.

At one point, Philippoussis was also engaged to Jennifer Esposito, and then the dude went broke.

And similar to Penny, Philippoussis also had his own brush with reality TV, starring as the bachelor in Age of Love, another show I shockingly never laid eyes on.

By RotoRob
This entry was posted on Monday, November 8th, 2010 at 6:39 pm and is filed under RotoRob, Squeeze Play. You can follow any responses to this entry through the RSS 2.0 feed. You can leave a response, or trackback from your own site.