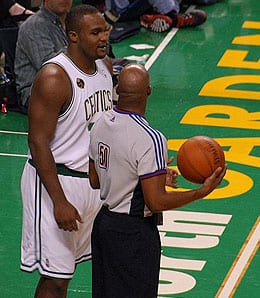 Big Baby is earning big minutes for the Men in Green.

Welcome back to The Wire Troll, our weekly look at players that may be available on your league waiver wire but could see a spike in Fantasy value due to a variety of circumstances. Though the NBA season is just over two weeks old we’re already seeing some interesting developments creating Fantasy opportunities across the league. As always, it’s important to stay abreast of the latest news, injuries and lineup shuffling, and there’s no better way to do that than by following the Wire Troll on Twitter.

Now, let’s have a look at a few players that are moving the needle this week.

Glen Davis, Boston Celtics: Big Baby is racking up the minutes off the Boston bench whilst spelling the aging trio of Kevin Garnett and Jermaine and Shaquille O’Neal. Though he has been an underachiever throughout his pro career, Davis is really asserting himself in 2010-11, averaging 13.7 points and 4.7 boards through his first six games. For now, he is best deployed in deeper leagues, but should (by which we mean “when”) one of the Celtics’ fragile frontcourtmen suffers an injury, the big kid could blow up in a big way.

Serge Ibaka, Oklahoma City Thunder: We knew the blocks would come in bunches, but what a shock to look up and see the second-year centre averaging 11 points and 7.6 boards through five games. Ibaka is still raw, but his upside is considerable – even in the Thunder’s star-studded lineup. Grab Ibaka if you’re wanting for blocks; as long as he’s seeing 25-30 minutes per game he should continue swatting around two per night. Whatever else you get for your trouble should be considered house money.

Carlos Delfino, Milwaukee Bucks: One of last season’s waiver-wire darlings was reckoned for a bench role this season, but apparently he didn’t get that memo. Through six games, Delfino was averaging 14.7 points, 4.3 rebounds, 2.7 assists, 1.7 steals and 2.8 treys. Milwaukee may tinker with its lineup from time to time, but it’s hard to imagine Delfino not being a big part of the team’s plans. Continue to ride him while he’s hot, but keep an eye on his playing time.

Richard Jefferson, San Antonio Spurs: Wow, who saw this coming? Jefferson stunk like zoo dirt in his first season with the Spurs, but he has turned it around big-time through his first four games. He has averaged 20 points and two treys per night, and has suddenly become Fantasy-relevant again. Don’t look for big peripheral numbers from RJ; he’s as much a pure scorer as you’ll find out there. While he’s draining shots like he is currently, though, he should definitely be a part of your Fantasy plans.

Taj Gibson, Chicago Bulls: While Carlos Boozer is on the shelf, Gibson is making the most of his minutes served in the big man’s stead. Through five games, Taj had averaged 15 points, 6.2 boards and 1.4 assists. Boozer figures to be out until early December, so Gibson’s fine run should continue until the Booze Cruise sets sail once again. It would not be surprising to see Gibson’s shot blocking numbers increase somewhat, as he averaged 1.3 swats last season.

Toney Douglas, New York Knicks: While Landry FieldS is still the Knicks’ starter at shooting guard, Douglas is seeing big minutes off the bench — and the energetic youngster is filling up the box score. Through five games, Douglas was averaging 16.4 points, 4.6 boards and 2.4 assists per night – along with 2.2 treys and 2.4 steals. Those steal numbers are not a fluke; his defensive skills are very strong, and he could easily sustain elite numbers in this category if he continues to see big minutes. If Douglas is still available in your league, grab him – he could become a Fantasy monster in Mike D’Antoni’s wide-open scheme.

Eric Bledsoe, Los Angeles Clippers: Bledsoe has posted some fine numbers in Baron Davis’s stead, and B-Diddy may not return for a few more games. While we try not to engage in rumour-mongering here at the Troll, there are whispers that Diddy is being shopped around. Obviously, if Davis (and his ginormous contract) were to depart, Bledsoe could become a must-own player. Even if he’s just a short-term grab, Bledsoe should be added in most leagues as long as he’s starting for the Clips.

Daniel Gibson, Cleveland Cavaliers: You may have heard about LeBron James’s departure from C-Town, but one of the big questions was who would pick up all of those stats Bron-Bron left behind. So far, Gibson is one of those “who’s.” We know Boobie can hoist the threes, and sure enough, he has averaged 1.6 per night through five games. The surprising numbers are his points (14.2) and peripherals (4.0 boards, 4.8 dimes). While we don’t expect that kind of across-the-board production to keep up, it’s clear that he is being asked to shoulder a fair part of the post-LeBron load in Cleveland.

By Buck Davidson
This entry was posted on Sunday, November 7th, 2010 at 2:08 pm and is filed under BASKETBALL, Buck Davidson, The Wire Troll. You can follow any responses to this entry through the RSS 2.0 feed. You can skip to the end and leave a response. Pinging is currently not allowed.