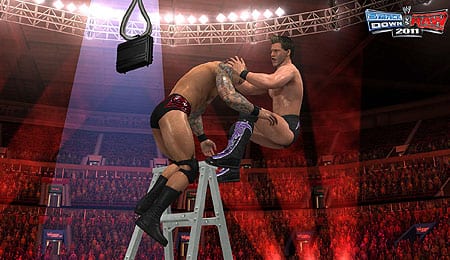 Orton takes a break from ripping off Steve Austin to eat a codebreaker from Y2J.

While there’s no denying WWE has gone in a decidedly more “family friendly” direction during Linda McMahon’s failed run at a Senate seat, THQ and Yuke’s have kept the video game franchise on a steady course for the better part of a decade. Last year’s introduction of a storyline creator was a huge boon to the franchise. However, with no signature addition for WWE SmackDown vs. Raw 2011, does the game make enough refinements to escape the dreaded “roster update” designation?

If you’ve played the SmackDown vs. Raw series before you’ll have zero trouble assimilating the handful of minor changes in this year’s version. The only one that’ll even modestly affect gameplay is the removal of the strong grapple, which means no more modifiers for the right stick commands. It felt a bit limiting initially, but after a while you get used to it. Getting opponents off the mat and pulling them around has also been tweaked to feel less cumbersome.

There appear to have been some minor advancements graphically as wrestler models looked a bit sharper this year. Animations continue to be very strong, particularly when executing moves or transitioning between holds — it can be a bit clunky when strikes are involved. The addition of Havoc physics lends more tangible mass to the game’s various foreign objects, and it makes for some cool moments even though you’re sure to see glitches pop up as well.

Where WWE SmackDown vs. Raw 2011 struggles is with the new backstage component of the Road to WrestleMania mode. Every arena looks exactly the same, which is to say completely devoid of anything interesting, making exploring them a chore. The lip synching is nonexistent (think old kung fu movies) and just kills moments that are being presented as dramatic.

Superstar music and sound effects are excellent. Much like the swish of a basketball going through the net or a lightsaber igniting there’s something cool about the reverberating sound of someone getting slammed on a wrestling mat. SVR 2011 nails that and pretty much everything else from chops to devastating chair shots.

As good as those things are, however, the announcing and voice acting fail to keep pace. Jerry Lawler is OK, but Michael Cole is awful, both in his delivery of lines (can I get a little excitement for winning the title at WrestleMania?) and the amount of times they repeat. Unlike previous years, Cole/Lawler is the only announce team represented so don’t expect a reprieve from Cole’s shoddy work.

The wrestlers themselves are inconsistent. For every competent performance (Chris Jericho, John Cena, Triple H) there are several miserable ones (R-Truth, Evan Bourne, Jack Swagger) where it sounds as if they were reading lines they’d never seen before off a teleprompter. It’s pretty sad when half their job is to cut promos and yet they can’t deliver lines with even an ounce of personality.

If you’re anything like me your first stop will be on the Road to WrestleMania, which returns with four new character-specific storylines and one where you choose from four mid-card wrestlers or one that you’ve created to face off with The Undertaker. The mode plays similarly to last year with one notable difference — the backstage area.

Acting like a hub with exclamation points marking where you need to go to activate the next event, the backstage addition comes across as unfocused. Each week you’ll see several wrestlers or divas milling about and you can try to strike up a conversation with them. Sometimes these will unlock additional challenge matches or flesh out details of parallel angles concerning other superstars, which can be interesting. Unfortunately, more often than not they’ll just brush you off with some dismissive comment even if you just got done teaming with them. You’re also given the option to brawl with any non-diva, though those impromptu brawls get repetitive in short order.

Technically, these backstage segments are almost entirely optional, but if you’re someone that likes to unlock everything you’ll need to thoroughly explore the exact same assortment of locker rooms and hallways every week lest you miss out on something. It definitely gets tiresome wandering around in the back looking to trigger anything of interest. Plus, as touched on earlier, the lip synching is so bad it undermines the tone of conversations.

The storylines themselves are about on par with what we’ve seen before. Some aspects are silly and there’s minimal branching off the main path, but I enjoyed playing through them for the most part. The Undertaker story is unique in that it pretends that his powers are legitimate, even going so far as having you collect vanquished souls with his legendary urn. I can appreciate thinking outside the box, though as someone that’s never enjoyed that aspect of the WWE, I didn’t care for it.

Matches are usually fun even though they’re hampered by the same uneven A.I. we’ve seen for years. On the lower difficulty settings the computer barely puts up on a fight while on the higher ones even the most plodding superstar becomes a technical wizard capable of reversing nearly all of your moves. Thankfully, I managed to find a happy medium through the game’s sliders. Partner A.I. remains a source of constant frustration for me, however, as the computer still allows your pinfall and submission attempts to be broken up repeatedly.

Facing off in local or online multiplayer can also be frustrating because of the one-button reversal system, which turns matches into a never ending series of counters. The result of not being able to consistently grapple your opponent is a lot of contests devolving into a flurry of running attacks. It’s definitely an aspect of SVR 2011 that needs some attention for next year.

Probably the biggest addition to WWE SmackDown vs. Raw 2011 is the WWE Universe mode. Best described as a melding of the career and GM modes, WWE Universe creates a perpetual calendar of WWE events, including three shows (Raw, SmackDown and Superstars) and a PPV each month. The game formulates the cards based on rankings and feuds. You’re welcome to change anything you see, moving wrestlers from one show to another, stripping/awarding titles, rebooking matches, etc.

There are some limitations to your autonomy, however, as the game’s ranking system determines who gets into the No. 1 contender’s matches and subsequently the title picture. WWE Universe mode also supplements all the data it’s keeping track of with random cut scenes and storyline elements. It’s a cool idea, though it still feels like a work in progress. Scenes repeat too often and don’t always make sense in the context of what’s going on. Still, it’s interesting to be given the chance to evolve the promotion how you want, and it serves as a nice alternative to the scripted Road to WrestleMania.

As usual, Yuke’s and THQ do a great job of putting a ton of accessible creation tools at your disposal. The create-a-storyline makes a triumphant return and has been beefed up a bit while also doing away with some of the original’s shortcomings (such as limiting create-a-wrestler appearances). Given some of the great stuff users came up with last year I’m really looking forward to seeing what we’ll get this time around. It still rates as one of the best community tools out there, offering up the chance to create and download a staggering amount of content.

Online play has seen the addition of the Royal Rumble match, allowing up to 12 players to compete for supremacy in the 30-man over-the-top-rope battle royal. You select a superstar to start and once you’re eliminated you come back as the next entrant. On paper it sounds fun, but in practice I struggled to find a good connection. Instead I was met with just enough lag to throw off the timing of my counters as I went flying over the top rope.

I also saw some odd things happen — for example, in one match, Christian (controlled by the computer) tossed the last human player and then just stood in the ring for a full five minutes as everyone left the game session. I stayed because I was working on this review and wanted to see what happened. Eventually wrestlers started coming down again and the match finished without further incident.

While it doesn’t advance the series in the same way as last year, WWE SmackDown vs. Raw 2011 is still a fun game to play. The amount of pre-packaged content along with a deep set of creation tools makes this a title with massive replay value.

By Herija Green
Tags: WWE
This entry was posted on Thursday, November 4th, 2010 at 4:53 pm and is filed under Herija Green, Video Game Reviews. You can follow any responses to this entry through the RSS 2.0 feed. Both comments and pings are currently closed.