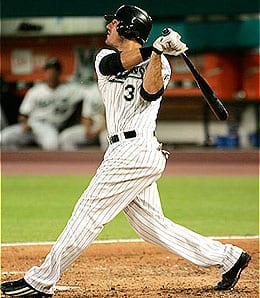 Jorge Cantu provided depth at first base for Texas.

On Friday night, the Rangers laid to rest any worries they would blow the ALCS, knocking out the defending champion Yankees with ease to advance to their first World Series.

Lost in the hoopla of the great story that is the Rangers was the possibility – albeit an unlikely one – that Derek Jeter has played his last game as a Yankee.

The ten-year contract he signed way back in February 2001 expires at the end of the World Series, making Jeter a free agent. Though it’s widely assumed the Yankees will re-sign their captain, the overrated shortstop still faces the prospect of having to negotiate a new deal with the only team he’s ever been employed by.

Jeter had a middling ALDS, going 4-for-14 with one RBI, and other than a couple of nice games, he struggled in the ALCS, finishing 6-for-26 with just two runs and one RBI in six games.

Not exactly awe inspiring number, are they?

Now 36, does Jeter have another comeback season like 2009 in his bag of tricks? I’m not going to bet against it, but I’m not exactly going to guarantee it, either.

How impressive was it watching Neftali Feliz mow down the Yankees in order in the ninth inning Friday? Other than a slight hiccup in the ALDS, Feliz definitely looked like a shut-down closer in the postseason, and his tender age and relative lack of experience weren’t factors.

Last month, we already anointed him as our likely AL ROY, and playoffs obviously don’t factor into the equation, but his performance just vindicated our thinking.

And once again, we are reminded how big that Mark Teixeira to Atlanta trade was in the building of the 2010 American League champions. Kudos to GM Jon Daniels for that move as well as the many shrewd decisions he made this season to forge this club, such as the additions of Cliff Lee, Jorge Cantu, Cristian Guzman, Bengie Molina and Jeff Francouer.

By the way, that earned run that Feliz surrendered in Game Three of the ALDS was his first since August 22. Yes, the kid is good. Now the only question that remains is will he stay as the closer or be part of Texas’ rotation next season?

His counterpart on the Yankees, Mariano Rivera, was his typical untouchable self in the playoffs, tossing six shutout frames with four hits and no walks allowed. He’ll be 41 next month, but the Yankees did a great job of using the 1999 World Series MVP judiciously this season, ensuring he had another brilliant campaign.

Like Jeter, Rivera is a free agent this offseason, and David Robertson looks ready to be a closer, but the Yanks will lock up Mo regardless, because as we know, money is no concern in New York.

Cantu, by the way, is expected to remain on the World Series roster to back up Mitch Moreland. A pending free agent after the series, Cantu could wind up in St. Louis.

Guzman, who’s been a complete non-factor in Texas, will also hit the free agency market this winter, and given that there are so few palatable options at second this winter, he could find himself back in a full-time job somewhere.

As one of the superstars of the game, Carl Crawford will command plenty of attention as a free agent this winter. St. Louis could use another big stick, but isn’t expected to pony up that kind of money. The Mets, however, might go after him, as he’s exactly what they need. Of course, they might have competition from the Yankees (big shock there), although the Yanks are probably going to concentrate on upgrading their rotation. And Boston may also make a big play for Crawford, in what should be a serious bidding war.

By RotoRob
This entry was posted on Sunday, October 24th, 2010 at 5:00 pm and is filed under BASEBALL, RotoRob. You can follow any responses to this entry through the RSS 2.0 feed. You can skip to the end and leave a response. Pinging is currently not allowed.