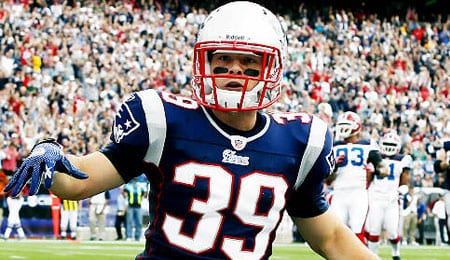 Danny Woodhead has been very effective for the Pats (Townson/AP).

The Steelers still have a slight lead over the Jets as they continue to hold the number one spot, while the AFC dominates, holding all top five spots in the rankings.

Biggest Jump: The Tennessee Titans have powered through 11 spots from 19th to eighth thanks to Chris Johnson’s incredible speed and agility.

Biggest Drop: San Diego Chargers have plummeted 13 spots from 11th to 24th after losing two straight games to the Raiders and the Rams.

1. (1) Pittsburgh Steelers, 4-1: After an early interception, Ben Roethlisberger dusted off the rust from his suspension with over 250 passing yards and three touchdowns. Rashard Mendenhall was injured after a helmet-to-helmet hit, however the injury was downplayed after the game, so it’s not too serious. All receivers, including Mike Wallace, Hines Ward, and Heath Miller increase greatly in value with the return of Big Ben.

2. (4) New York Jets, 5-1: Rex Ryan’s group enters their bye week with the league’s best record. Mark Sanchez threw his first two interceptions of the season on Sunday, however, the Jets still won thanks to LaDainian Tomlinson continuing his fine play this season with a pair of TDs.

3. (8) New England Patriots, 4-1: Randy Moss is gone, but Deion Branch is back and played exceptionally well, catching passes from Tom Brady again. The much repeated playoff matchup against the Chargers will take place in San Diego on Sunday.

4. (6) Baltimore Ravens, 4-2: This is an excellent team with an improved receiving core, however, after two road losses to Cincinnati and New England, there is still room for improvement as the Ravens play a struggling Bills team this weekend. Look for Ray Rice to have a breakout game against the Buffalo defense.

5. (9) Indianapolis Colts, 4-2: Joseph Addai came up huge on Sunday night with 17 carries for 128 yards and a touchdown, however, he was seen injured again after the game with his left arm in a sling. The Colts move into their bye week, which gives extra time for their players to heal.

6. (2) New Orleans Saints, 4-2: The Saints got a big win after an astonishing loss against Arizona last week; let’s see if they can maintain this level of play against Cleveland this week until Pierre Thomas and Reggie Bush return.

7. (5) Atlanta Falcons, 4-2: After a tough loss in Philly, the Falcons have another chance to win big at home against Cincinnati, and it looks good as they are 2-0 at home this season. Michael Jenkins returned to the field to help give Matt Ryan more targets and he came through with five receptions for 99 yards on 11 targets.

8. (19) Tennessee Titans, 4-2: Chris Johnson is clearly the Titans’ workhorse with Vince Young getting injured, however, their next opponent, the Philadelphia Eagles, shut down powerhouse runner Michael Turner last week.

9. (17) Philadelphia Eagles, 4-2: Whom will Andy Reid choose? Kevin Kolb or Michael Vick, both have played very well, but with DeSean Jackson out, those that prevail are Jeremy Maclin and LeSean McCoy.

10. (7) Houston Texans, 4-2: The Texans move into their bye week in a three-way tie for the lead in the AFC South with the Colts and the Titans. Their defense will hurt with DeMeco Ryans out for the rest of the season, but their offense will continue to strive and improve with Owen Daniels almost fully healthy.

11. (20) New York Giants, 4-2: After winning three straight games, the Giants travel to Dallas for a big divisional showdown on Monday. Look for Hakeem Nicks to have another nice game.

12. (12) Chicago Bears, 4-2: The Bears suffered a tough loss, but Mike Martz did not employ the run enough with only 14 carries for the whole team. The Bears’ offensive line needs to improve, having already giving up 25 sacks this season.

13. (3) Green Bay Packers, 3-3: The Packers suffered a second straight loss in OT, and this one was at home. They are going to need to figure something out; they finally got Greg Jennings in the game with 133 yards and a touchdown, but they face Minnesota on Sunday night and need to beat them after losing both games to them last season.

14. (10) Kansas City Chiefs, 3-2: Thomas Jones and Jamaal Charles continue to roll through the opposition with their incredible running game, however the Chiefs’ defense couldn’t hold up against Houston’s high-powered offense. KC hosts the struggling Jaguars on Sunday, so look for a big rebound.

15. (16) Washington Redskins, 3-3: Donovan McNabb hasn’t looked incredible this season, but with an actual running game behind Ryan Torain, the Redskins have a chance to take down the Bears in Chicago this week.

16. (13) Miami Dolphins, 3-2: Chad Henne finally shut up some of his critics after a big game in Green Bay. The Dolphins host a very tough Pittsburgh team on Sunday as they will try to avoid a third straight home loss. Davone Bess seems to be becoming a bigger and bigger factor each week.

17. (15) Minnesota Vikings, 2-3: Things are starting to look up for this team after a big win in Dallas. Brett Favre finally has some more weapons with Randy Moss on his team, although he is still struggling which puts the load on Adrian Peterson who has been playing very well this season.

18. (25) Arizona Cardinals, 3-2: This Sunday in Seattle Max Hall and the Cards will battle the Seahawks for the lead in the NFC West. Coming off a bye week should have helped Hall get more in sync with the starters.

19. (24) Tampa Bay Buccaneers, 3-2: The Buccaneers need a running game if they want to put up more of a fight in their division. Josh Freeman will not be able to do it all himself.

20. (18) Cincinnati Bengals, 2-3: The big question facing the Bengals: was the bye week enough for them to overcome their problems on the field in order to beat the Falcons in Atlanta on Sunday? As the defending NFC North division winner, at what point should a sub-.500 Cincinnati squad begin to panic?

21. (23) St. Louis Rams, 3-3: Wow! I bet the Rams are happy they drafted Sam Bradford, who already has one more win than Matthew Stafford. After a huge win over the Chargers, St. Louis travels to Tampa Bay, where it will attempt to earn a fourth win and — gasp — open up a winning record for the season.

22. (21) Denver Broncos, 2-4: The Broncos’ tough schedule eases up a bit now as they face the Raiders. Knowshon Moreno is back and he will need to pick up the pace to help his team win. On the plus side for this struggling squad, at least Tim Tebow got his first career touchdown.

23. (26) Seattle Seahawks, 3-2: Mike Williams had a breakout game, and the Seahawks’ defense tore up the Bears’ offensive line to boost their confidence before a matchup with the Cardinals for the division lead.

24. (11) San Diego Chargers, 2-4: I though this team was done with the rollercoaster ride this season, but I guess not. The Chargers’ schedule actually gets harder as it now faces the Patriots, Titans, and Texans before its bye week. We are all waiting for Ryan Mathews to have a breakout game; could this be his week? It sure won’t be easy against a strong Patriot run defense.

25. (22) Jacksonville Jaguars, 3-3: The Jags travel to Kansas City without a confirmed starting QB, and a struggling Pro Bowl running back. Jacksonville’s inept offense will struggle against what’s looking like a much improved Chief defense.

26. (14) Dallas Cowboys, 1-4: The Cowboys have so much talent on both sides of the ball, but cannot win, which is what matters in the end. The Giants come to Dallas for a big Monday Night Football showdown and if the Cowboys really hope to be Super Bowl bound in the first year of their shiny new stadium, this is a must-win game.

27. (28) San Francisco 49ers, 1-5: The 49ers finally got their first win of the season, but Alex Smith only seems to play well after halftime. On Sunday, they play an even worse team in the Panthers, so San Francisco could have a winning streak if it can figure out how to play four quarters.

28. (29) Oakland Raiders, 2-4: Thanks to injuries, the Raiders have lost the ability to score and win; thankfully, Darren McFadden should return this week.

29. (31) Detroit Lions, 1-5: If the Lions don’t start developing some consistency in their running game, their chances of winning decline. They are in their bye week, so should figure some things out, like maybe even how to win a road game after suffering their 24th straight loss away from home — tying an NFL record in the process.

30. (27) Cleveland Browns, 1-5: It seems Colt McCoy may do better in the NFL than some expected after he aggressively attacked the Steelers’ defense. He brings some hope to this struggling team.

31. (29) Carolina Panthers, 0-5: Matt Moore was benched for Jimmy Clausen and now Moore is back. The Panthers are last in the league with 136.4 passing yards per game.

By Trevor Blake
This entry was posted on Tuesday, October 19th, 2010 at 8:26 pm and is filed under FOOTBALL, NFL Power Rankings, Trevor Blake. You can follow any responses to this entry through the RSS 2.0 feed. You can skip to the end and leave a response. Pinging is currently not allowed.