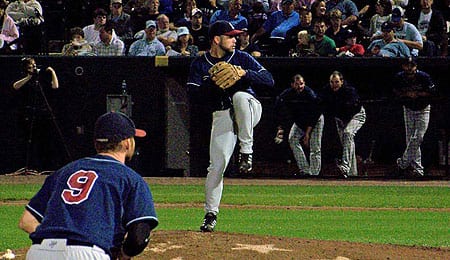 Another season of Independent League ball is done, and as we were recently scouring the Atlantic League All-Stars and award winners, as always, a few interesting names popped out at us.

Josh Miller, who was the Phillies’ 32nd round pick in 2001, has clearly found his groove in the Indy leagues. After topping out at Triple-A in the Astro system, Miller joined the Atlantic League in 2009, going 10-5 with a 3.65 ERA and 1.31 WHIP in his first season with Somerset. This year, he upped his record to 12-9 while equalling his 2009 ERA and whiffing 101 batters in 187 1/3 IP to earn recognition as a Second Team All-Star. After two straight solid seasons, perhaps the 31-year-old righty will get an invite to a major league Spring Training camp. You’d think he might be useful in a long or middle relief role.

Jeff Nettles, son of former Yankee great Craig Nettles, was selected by the Yanks in the 47th round way back in 1998. He was clearly a courtesy pick, as Nettles struggled in the minors and never progressed past Triple-A, and he’s been toiling in the Atlantic League since 2003, except for a half season at Double-A for the Royals’ organization and one year at that level in the Orioles’ organization.

He’s enjoyed some strong years in the Atlantic League, and 2010 was no exception, as he hit .299 with a .366 OBP en route to a Second Team All-Star selection. Now 32, Nettles isn’t likely to get another shot at organized ball. He simply didn’t do enough in his second try to warrant sticking around. It’s unfortunate that he’ll never get to play in the majors given his bloodlines.

Another Somerset player that earned Second Team honours was outfielder Wayne Lydon, selected by the Mets in the ninth round in 1999, but yet another player that topped out at Triple-A. Known for his speed, Lydon once stole 87 bases in the Sally League, but his lack of a solid second tool doomed him.

The 29-year-old enjoyed a solid first season in the Atlantic League in 2009 with Camden, scoring 99 runs in 139 games. This year, however, Lydon took his game to a new level with the Patriots. In 130 games and 540 at-bats, he ripped 160 hits, including 19 doubles, ten triples and nine dingers. Lydon also swiped an eye-popping 66 bases with an impressive .296/.366/.419 line. It’s not unreasonable to think he’d make a solid fourth outfielder/pinch runner for a big league team. Let’s see if Lydon gets any bites this winter.

Scott Grimes went undrafted out of Keystone College, so he’s been plying his trade in Independent ball since turning pro in 2006. A monster season in the CanAm League in 2008 earned him a look in the Mets’ system in 2009, but he underperformed at both the Rookie and Low A levels, despite being old for those leagues. So the 27-year-old outfielder found himself back in Indy ball this season, and what a campaign he had, scoring a whopping 138 runs in 132 games. The Atlantic League Co-Player of the Year also drove in 59, walked 84 times against 99 strikeouts, stole 28 bases, smacked 17 homers and enjoyed a fine .312/.429/.502 line. I’d like to see what he can do at Triple-A or at least Double-A, if given the chance.

Grimes shared the award with Aaron Herr, another player with major league bloodlines, and someone that caught our attention last year when he first popped up in Indy ball. Herr spent over two seasons in Triple-A with varying levels of success before enjoying a pretty solid debut with Lancaster in 2009.

In 127 games this season, Herr exploded with 91 runs, 35 doubles, 23 homers, 103 RBI, four steals and a .321/.370/.526 line. Just 29, this former first rounder could garner attention from a big league team this offseason, but what worries me is that he struck out 110 times this year. Whiffs have been a problem in past for Herr, and the fact that he fanned 257 times in 234 Triple-A games is probably a big part of the reason he was banished to the Indies.

The Atlantic League’s Manager of the Year is someone that’s sure to bring back memories for Blue Jay fans – Willie Upshaw. It’s nice to see him faring well; perhaps he’ll get a chance to coach again in the bigs. You may recall that Upshaw spent a couple of seasons coaching first base for the Giants. Perhaps he can land a minor league managerial gig and work his way up.

Finally, the Atlantic League’s Pitcher of the Year is another name that is definitely familiar to prospect hunters and beleaguered Royals fans – Dan Reichert. The last time we heard anything about Reichert was a couple of years ago when he was one of the arms Cleveland was considering for the rotation after dealing away C.C. Sabathia. However, even the Indians weren’t that desperate, and Reichert spent the rest of 2008 bouncing around Triple-A and Double-A in the Cleveland and Pittsburgh organizations before winding up back in Indy ball in 2009. He looked pretty good last season, racking up 14 wins with 126 strikeouts in 193 IP.

This season, Reichert broke the Atlantic League record by winning 18 games, finally showing the promise that made him the seventh overall pick in 1997. His 3.95 ERA didn’t scream dominance, but you’d have to think that Reichert’s big season has earned him the right to get back to the Show for the first time since – gasp – 2003.

By RotoRob
This entry was posted on Wednesday, October 13th, 2010 at 5:03 pm and is filed under BASEBALL, Independent leagues, RotoRob. You can follow any responses to this entry through the RSS 2.0 feed. You can leave a response, or trackback from your own site.