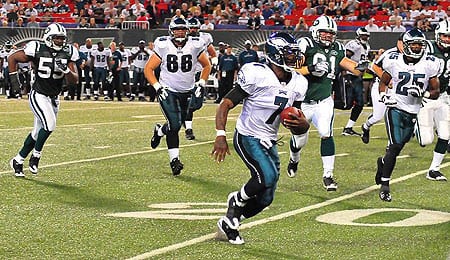 Michael Vick (7) will miss the next week or two as his ribs are apparently barking like a wounded dog.

Some of the big headlines from this week’s games: Donovan McNabb received a standing ovation in Philly before he beat up his old team, and over on the Eagles’ side of things, Michael Vick is now injured. Josh Scobee single handedly beat Peyton Manning as he kicked a 59-yard game-winning field goal to help the Jags beat their division rivals. The New York Giants recorded ten sacks Sunday night as they left Jay Cutler with a concussion.

Start of the Week: Peyton Manning vs. Kansas City Chiefs

Biggest Jump: After beating up on Arizona, San Diego jumped seven spots from 18th to 11th as Philip Rivers and Antonio Gates hooked up twice for touchdowns.

1. (1) Pittsburgh Steelers, 3-1: Ben Roethlisberger is now back with the team completing the Steelers as they enter the bye week as the top team in the league.

2. (2) New Orleans Saints, 3-1: There is something suspect about the Super Bowl Champions, however they are still winning and travel to Arizona to face a terrible run defense. If Pierre Thomas is healthy he could have his biggest rushing game of the year.

3. (4) Green Bay Packers, 3-1: The Packers are going to need to get their running game going with either John Kuhn or Brandon Jackson against the Redskins on Sunday to give Aaron Rodgers some more room to play better.

4. (7) New York Jets, 3-1: LaDainian Tomlinson’s new team has given him back a couple more years after a phenomenal performance. After a shaky start to the season, Mark Sanchez has thrown for 637 yards and eight TDs with no interceptions the past three weeks.

5. (5) Atlanta Falcons, 3-1: Matt Bryant has done it again, and has now made a clutch game-winning field goal in each of the last two games. Roddy White continues to play well, and even created another forced fumble on the opposing team after an interception.

6. (8) Baltimore Ravens, 3-1: Joe Flacco’s poised performance led to a big divisional win. The Ravens return home to face Denver and their defense should prevail against a pass-heavy Bronco squad.

7. (9) Houston Texans, 3-1: If the Texans’ offensive line can hold up against the Giants’ relenting defensive line, then Arian Foster can have a big game along with Matt Schaub (if Andre Johnson returns to play, which sounds possible).

8. (10) New England Patriots, 3-1: Tom Brady had a mediocre game, and Randy Moss was targeted just once and failed to make a catch while the Pats’ defense and special teams finally showed up with Patrick Chung.

9. (3) Indianapolis Colts, 2-2: The Colts’ second straight divisional loss had to sting despite the high-powered offense led by Peyton Manning. Next week against the undefeated Chiefs he should have a big game along with his top three receiving targets, Reggie Wayne, Dallas Clark, and Austin Collie.

10. (16) Kansas City Chiefs, 3-0: The Chiefs are the last remaining undefeated team (congrats to those of you that had them picked for that honour) and when they head to Indianapolis to face the Colts, look for them to try to bring a big running game behind Thomas Jones and Jamaal Charles.

11. (18) San Diego Chargers, 2-2: The Chargers had another big rebound game after a disappointing loss; now let’s see if they can get two wins in a row as they fly to Oakland. Ryan Mathews finally reached the end zone last week and should receive more carries this week. Mike Tolbert will lose stock as Mathews gets healthy, but both should run a lot against an extremely weak Raider rush defense.

12. (6) Chicago Bears, 3-1: The Bears allowed ten sacks, leaving their quarterback, Jay Cutler, with a concussion. Matt Forte is averaging 2.7 yards per carry this season and needs a big game against the Panthers on Sunday to help spread the defense for the healing quarterback.

13. (11) Miami Dolphins, 2-2: Two big home losses have brought questions about Chad Henne’s place as starting QB as he was pulled for Tyler Thigpen in the fourth quarter Monday night. The Dolphins have a bye week at a good time as they try to figure out their problems. Davone Bess showed his speed and agility, racking in nine receptions for 93 yards and a touchdown.

14. (15) Dallas Cowboys, 1-2: The Cowboys are well rested after their bye week and are set up against the Titans. Tony Romo and his receivers could have a big day on Sunday.

15. (17) Minnesota Vikings, 1-2: Facing the Jets on Monday night will be a tough test. If Brett Favre gets into sync with his receiving corp, then they should put up a good fight in this showdown. Adrian Peterson, however, may have a tough game but obviously remains a must start as always.

16. (20) Washington Redskins, 2-2: After his standing ovation in Philly, Donovan McNabb beat his old team, and Ryan Torain emerged as the top back for the Redskins.

17. (13) Philadelphia Eagles, 2-2: Michael Vick is injured, Kevin Kolb is back starting, and LeSean McCoy broke a rib and his status is unclear. After everything was looking so good with Vick, the Eagles’ whole world was turn upside down in one game.

18. (12) Cincinnati Bengals, 2-2: The Bengals suffered a tough loss, but it was a great game for Carson Palmer and Terrell Owens. T.O. pulled in ten catches for 222 yards and a touchdown, moving into second place in all-time receiving yards. Cincinnati plays Tampa Bay on Sunday and Cedric Benson could have a strong game.

19. (14) Tennessee Titans, 2-2: Chris Johnson was completely shut down by the Broncos’ defense as he rushed 19 times for 53 yards. After leading the NFL by a country mile last season, he is only ranked sixth in rushing yards this season. The Titans face a rested and determined Dallas team that wants a second win after its bye week.

20. (24) New York Giants, 2-2: Osi Umenyiora and Justin Tuck recorded three sacks each as the Giants broke through for ten sacks against the Bears. If the Giants can keep it up next week versus Houston they’ll have a chance to move to the top of the NFC East.

21. (23) Denver Broncos, 2-2: Without Knowshon Moreno for the running game, Kyle Orton has to take the team in his hands, which will happen again facing Baltimore, a tough task considering the Ravens have the best pass defense in the NFL. Orton’s top targets are Brandon Lloyd, Eddie Royal, and Jabar Gaffney.

22. (28) Jacksonville Jaguars, 2-2: Maurice Jones-Drew finally had his breakout game as he eclipsed 100 rushing yards along with one rushing and one receiving touchdown. On Sunday, the Jaguars play the Bills, owners of the league’s worst rush defense, so look for MJD to have another big game.

23. (26) St. Louis Rams, 2-2: Sam Bradford can lead the Rams to a possible division title in the struggling NFC West. His next stop is in Detroit; Steven Jackson should help him out in this one against a weak Lion rush D.

24. (22) Tampa Bay Buccaneers, 2-1: Cadillac Williams will now be losing a share of his carries to LeGarrette Blount and Kareem Huggins. Let’s see if Josh Freeman can lead his team to a third win against the Bengals.

25. (21) Arizona Cardinals, 2-2: Pretty soon Max Hall will be the starting quarterback, but for now Beanie Wells’s and Larry Fitzgerald’s stock drops as this team struggles behind Derek Anderson.

26. (19) Seattle Seahawks, 2-2: After struggling to run the ball all season the Seahawks acquired Marshawn Lynch in a trade with the Bills on Tuesday, but he’ll have a heavy workload trying to carry this team.

27. (31) Cleveland Browns, 1-3: After being in close games for the first three weeks, the Browns finally got their first win of the season. Peyton Hillis continues to be a must start after proving himself the starter.

28. (25) San Francisco 49ers, 0-4: The 49ers just can not get a win this year, and the pre-season favourite for the division is quickly falling out of contention as Alex Smith struggles week in and week out.

29. (27) Oakland Raiders, 1-3: This looked like Darren McFadden’s breakout year, but a sudden hamstring injury in Sunday’s game may cloud the rest of his season. Michael Bush is a big pickup if McFadden is out.

31. (30) Detroit Lions, 0-4: Shaun Hill shouldn’t have to pass over 50 times a game, but even though Calvin Johnson came up big, the Lions are still looking for their first win of the season with St. Louis next up.

32. (32) Buffalo Bills, 0-4: With Lynch gone, Fred Jackson’s and C.J. Spiller’s value goes up as the Bills continue to rebuild against Jacksonville on Sunday.

By Trevor Blake
Tags: NFL
This entry was posted on Wednesday, October 6th, 2010 at 1:53 pm and is filed under FOOTBALL, NFL Power Rankings, Trevor Blake. You can follow any responses to this entry through the RSS 2.0 feed. Both comments and pings are currently closed.