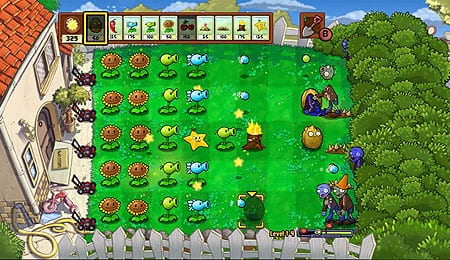 For whatever reason, I’ve never really gotten on board with gaming’s seemingly endless love affair with all things zombie. Killing that which is already dead just doesn’t do it for me. Surprisingly, though, it turns out having adorable plants do the killing for me is right up my alley.

As a ported PC game, Plants vs. Zombies faces the unenviable challenge of taking a point-and-click mouse interface and converting it into a user-friendly experience on the Xbox 360 controller. PopCap manages to do this seamlessly by using the bumpers to cycle through available items, the left analog stick to navigate the game’s grid and the “A” button to plant. No issues here.

One wouldn’t think words like “cheerful” and “adorable” would be used when describing a game starring hordes of the undead, but they absolutely apply here. The plants are whimsical with lots of cute little graphical touches like the expression on the wall-nuts’ face changing as he’s being eaten, while the zombies have a diverse array of humorous brain munchers to throw at you. This helps keep the mood light in what can at times be a rather challenging game.

The sound effects — like the signature moaning for braaaaaaaains — all fit the game’s mood nicely, as does the music, which walks a fine line by being light hearted while still conveying some semblance of tension as your defenses begin to break. Special recognition is in order for the song played after clearing Adventure Mode. It absolutely had me cracking up.

Zombies are trying to get into your home to eat your brain; and the only thing standing between you and becoming a snack is your army of plants. For the uninitiated, Plants vs. Zombies is a tower defense game set up on a grid. Each square can contain a plant, and it’s up to you to maximize your defensive (and offensive) potential against an increasingly dangerous and versatile pack of zombies.

You’ll start off with a small selection of plants to deploy, but many more unlock as you progress through the game’s Adventure Mode while others are available for purchase. The game uses sunlight as your currency to grow more plants and each one has a specific ability. Sunflowers collect light, wall-nuts temporarily block advancing zombies, pea shooters damage them from afar, cherry bombs destroy anything around them and so on — there are 48 in all.

Once you familiarize yourself with the units, it’s all about figuring out the best strategy for mixing and matching your defenses. The game sends a steady stream of zombies at you during the 50-level Adventure Mode, and as you progress you’ll find they become more adept at penetrating your perimeter. Some carry makeshift shields or vault over your defenses while others swoop in on bungee cords and swipe your valuable protectors right out from under you.

Taking places over five levels, including two set at night, Plants vs. Zombies also mixes up the tower defense formula along the way by having variations like wall-nut bowling and a mode that presents seed packets on a conveyer belt, forcing you to create your strategy on the fly. Several mini games (such as puzzle and survival) also unlock as you make your way through Adventure Mode, and there’s loads of available content to be discovered.

New for the Xbox Live Arcade version is competitive and co-operative multiplayer. The Versus Mode is the best new addition, allowing one person to play as the plants while the other takes command of the undead army. It’s fast paced and surprisingly addictive — zombies are still trying to enter the house while the plants must destroy three targets on the zombie side. Worth noting is that PopCap has elected to offer local multiplayer only. That may disappoint some, but its reasoning of wanting to keep it fun and avoid players dropping out once they start losing is sound.

Plants vs. Zombies packs a lot of content and is one of those games where you just want to keep playing even as the minutes stretch into hours. The melding of strong tower defense mechanics and endearing graphics make for a game that shouldn’t be missed.