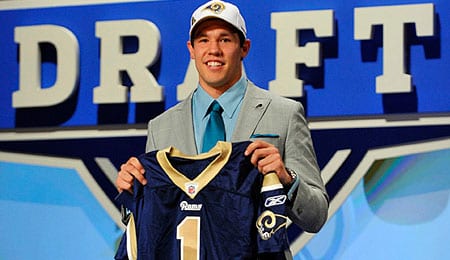 Sam Bradford isn’t even ready to be your backup Fantasy quarterback.

We drafted Tuesday night in my “big money” league where we are required to draft two quarterbacks, two tight ends, two defenses, two kickers plus four wide receivers and four running backs. We play only one QB and any combo of five WR/RB (standard scoring with one point per two receptions). So this is how my draft went…

Here are my questions…will Fitzgerald still be a top three WR with Derek Anderson at QB and will Jones get the ball enough to be my No. 2 RB? Do you see anyone on my team that “jumps out” at you (good or bad)?

Thanks as always to the smartest guy I know in this game.

QB — I like Romo; he’ll post big numbers with a few stinkers mixed in. He’s a legit starter, though. I don’t like Bradford as your backup at all. He’s not a top-25 Fantasy QB and drafting based on a mid-season matchup is bad strategy. Who is to say he’ll still be healthy? I’d be checking the waiver wire right away to see if you can get someone better.

RB — Your backs are solid. Peterson is a stud, and Jones certainly has the potential to be. There are some risks given his injury history and Dallas’ depth, but he’s got good upside. All things being equal, though, I’d rather he were your No. 3 back. Brown and Bush are decent depth. Not bad.

WR — I did drop Fitzgerald a bit with Anderson at QB, but he’s still a legit No. 1 option and weekly starter. The rest of the group is shaky at best and are much better suited as your fourth and fifth WRs than your second and third. Henderson is notoriously streaky, and neither Jones nor Williams has done anything in the NFL.This is easily the biggest weakness on your squad.

TE — Having Clark helps ease your WR concerns, and I like Carlson as a bench guy with upside.

DEF — I think the Steelers have great upside now that Aaron Smith and Troy Polamalu are back. Atlanta is a fine backup.

PK — I don’t like your kickers at all, and I think you’d be hard pressed to find any publication or web site with either of those guys in the top 20. If I were you I’d cut Dawson for someone (literally almost anyone) else, then keep Janikowski and your new PK and play weekly matchups.

By Herija Green
This entry was posted on Friday, September 10th, 2010 at 5:20 pm and is filed under Dear RotoRob, FOOTBALL, Herija Green. You can follow any responses to this entry through the RSS 2.0 feed. You can leave a response, or trackback from your own site.