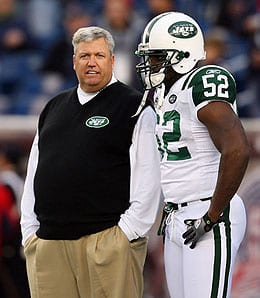 The 2010 RotoRob NFL Draft Kit surges forward today with the release of yet another cheat sheet. So while you wonder if the defensively-brilliant New York Jets have improved their passing game enough to take the next step towards AFC supremacy, let’s take a look at the NFL’s top defenses, from a Fantasy perspective.

All right, so maybe grabbing a Fantasy defense isn’t at the top of your priority list on draft day. That’s a good call: the points separation between defensive units often does not warrant the extra money or higher draft pick necessary to land one of the “elite” units. Still, you don’t want to end up with one of the sad-sack franchises, so it’s important to know when it’s most advantageous to make your move.

Use our tier system to help identify when it’s time to pull the trigger on your Fantasy “D,” but please remember that that “when” generally isn’t until your draft’s waning rounds.

The top-ranked Fantasy defenses are typically overrated on draft day, and this year is no exception. True, the Jets were downright stingy on D last season, but their rather pedestrian 32 sacks and 31 turnovers won’t cut the mustard in many scoring formats. Linebacker David Harris should lead the team in tackles, while Jet fans hope that uber-corner Darrelle Revis resolves his contract situation before Week One.

The Pack will have a difficult time replicating its 40-turnover, 37-sack, four-touchdown showing of a season ago, but its soft schedule should help prevent a drastic fallback. Ageless corner Charles Woodson pulled down nine picks last season, while rookie ‘backer Clay Matthews racked up ten sacks.

The Ravens were their typical fearsome selves in 2009, and could be even better if safety Ed Reed could stay on the field for 16 games. Inside linebacker Ray Lewis had a renaissance season, but at the age of 35 some slowdown is inevitable.

The Eagles always seem to fare well on defense, and end Trent Cole is one of the game’s most underrated sack monsters. Middle linebacker Stewart Bradley missed the entire ’09 season due to knee surgery, but appears to be fully recovered – making him a huge sleeper in deeper IDP formats. The Vikes, meanwhile, managed only 24 turnovers a season ago, but their 48 sacks led the league. Defensive end Jared Allen accounted for 14.5 of those, and the seven-year vet is arguably the league’s best down lineman. The Dallas defense is perennially overrated, but its 42 sacks last season was a nice bonus for its hopelessly enamoured Fantasy owners. Beware, though: the ‘Boys play the league’s third-toughest schedule in 2010. Not so the Steelers, who should wreak havoc on their cushy slate of opponents. Safety Troy Polamalu’s iffy health status makes him a risky play, but the Men of Steel are one of Fantasy’s safest defensive team selections. If it’s upside you’re after, consider the ‘Niners – who play one of the league’s easiest schedule and feature perhaps the game’s top defender in linebacker Patrick Willis. San Francisco produced 44 sacks, 33 turnovers and scored four times on defense in 2009, and more big things could be in store for ’10.

The Saints came from nowhere (isn’t that the way with Fantasy defenses?) to post some impressive Fantasy numbers in 2009, but we wouldn’t recommend betting on the Crescent City Crew scoring eight times on defense again this season. Of all our top defensive teams, the Saints are probably the most likely candidate to tumble into irrelevance in 2010. The Giants should be a click better in 2010 than ’09, thanks to the arrivals of steady Keith Bulluck and playmaking defensive back Antrel Rolle. The G-Men produced just 32 sacks last year, and that needs to change if they hope to regain their elite Fantasy status.

The Bengals are an intriguing Fantasy defense, as they finished seventh in points allowed last season, but produced just 25 turnovers. Keep an eye on linebacker Rey Maualuga, as he could become a difference-maker in his second season. Da Bears may not be Monsters any more, but they’re not exactly Mini Me, either. New arrival Julius Peppers is still a sack machine, but the Bears must cut down on the 375 points they allowed last season. Denver will miss All-Pro linebacker Elvis Dumervil, who will miss the entire season, but steady vets Brian Dawkins and D.J. Williams will again lead this underrated unit. The Chargers improved markedly as the ’09 season wore on, they play one of the NFL’s easiest schedules this year, and the ‘Bolts could be special if Shawne Merriman’s body holds up for an entire season.

On offense, the Pats feature a veteran crew, but the New England D is a young, disciplined group that allowed the fourth-fewest points in the league last season. The Patriots won’t rack up many sacks, but players like linebacker Jerod Mayo should once again make things tough on opponents. Miami surrendered a boatload of points last year, and produced only 21 turnovers, but new linebacker Karlos Dansby should inject some energy into this once-proud defense.

Houston is an exciting young defense, led by middle linebacker DeMeco Ryans and anchored by strong safety Bernard Pollard. The upside is there, but keep in mind that the Texans play the league’s toughest schedule in 2010. Speaking of upside, a four-game suspension is causing linebacker Brian Cushing to fall in drafts, and the beastly ‘backer has become a Fantasy bargain for those willing to wait. The Colts are a sound defense without Bob Sanders, but when Bombin’ Bob is in the lineup (alas, none too often lately) they are potentially a top-10 unit. Don’t sleep on the Browns; this tough group of no-names could be a Fantasy surprise in 2010. Tennessee was one of the league’s best defenses two seasons ago, and former Ram Will Witherspoon will try to help the Titans reclaim their former glory.

By Buck Davidson
Tags: NFL, NFL Draft Kit
This entry was posted on Wednesday, September 1st, 2010 at 6:53 pm and is filed under 2010 RotoRob NFL Draft Kit, Buck Davidson, Cheat sheets, FOOTBALL. You can follow any responses to this entry through the RSS 2.0 feed. Both comments and pings are currently closed.