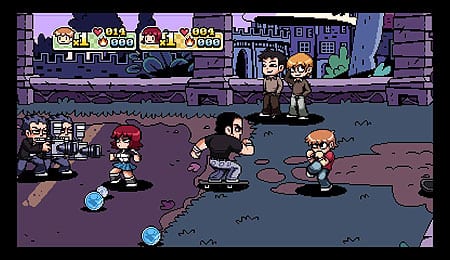 Seriously, how can anyone not dig the throwback graphics?

On the surface, I hardly seem to be the target audience for Ubisoft’s Scott Pilgrim vs. the World, a game based on a graphic novel I’ve never read (and a movie I haven’t seen). However, as soon as I fired it up and was greeted with all that pixilated goodness, I knew I was in for a treat.

Scott Pilgrim vs. the World has fairly simple controls, which stumble primarily because of the Xbox 360’s porous d-pad. It’s so hit or miss that I quickly abandoned it and went with the analog stick, which isn’t ideal for throwback gaming. The result was that I simply didn’t bother attempting some of the moves I unlocked as I leveled up, instead opting to go with combos I knew were effective and consistently executable. Even with the limitations, though, you’ve still got a solid repertoire of moves.

As you may have learned by now, I’m a sucker for old school graphics, and Scott Pilgrim vs. the World delivers delicious 8-/16-bit visuals. The developers clearly drew inspiration from previous eras when crafting this game as traveling across its seven levels is a nostalgia-filled romp with dozens of moments that made me think of titles I grew up playing. Each stage is wholly unique and filled with all manner of bizarre (and often comical) enemies.

Chiptune punk band Anamanaguchi provides an original soundtrack that is just fantastic as the pulse-pounding music fits the game like a glove. I actually found myself standing still at times just to listen without the distraction of smashing a half-dozen baddies’ faces in. It’s that good.

Scott Pilgrim is in love with Ramona Flowers. The only problem is that to date her he’ll need to defeat her seven evil exes as well as a boatload of cronies along the way. A side-scrolling beat ’em up that borrows heavily from River City Ransom (one of my all-time favourite games on any system), Scott Pilgrim vs. the World will challenge you with a constant onslaught of foes from start to finish while sprinkling in some memorable boss fights.

This is more than just a basic button mashing game, however, as each level contains shops where you can spend your hard-earned money (as in real life, defeated enemies drop coins) on a variety of foods, books, records and items. Each purchase will have some sort of positive effect on your character’s attributes, though you’ll actually need to buy them to discover what that is. You’ll also learn new moves as you gain experience, and given the game’s difficulty on even the lowest setting you’ll undoubtedly end up doing some grinding to upgrade your skills.

That level of difficulty brings us to our first significant drawback: the lack of online multiplayer. This is clearly a game built around playing with friends, supporting up to four players, but unless they’re in your home you’ll have to go it alone. It’s a real missed opportunity.

Where it really hurts is on the later levels when you start getting overwhelmed by enemies that seemingly delight in unleashing cheap tactics like attacking from off screen or trapping you in a corner while pounding the snot out of you. Adding players rectifies that in many cases, and even if you do fall they’re able to revive you. Playing co-operatively greatly reduces the number of frustrating, controller wringing moments, though the game is so addictive that you’re apt to forgive them rather quickly.

Said ability to forgive may be tested, however, as I encountered several technical issues during my time with Scott Pilgrim vs. the World. Most are minor and can be overlooked, but I did have the game completely freeze my Xbox 360 on almost a dozen occasions — including during the final boss fight — leading to hours’ worth of lost progress. It’s not a problem unique to me, either, as the Xbox Live and Ubisoft forums contain topics reporting the same issue.

Scott Pilgrim vs. the World has all the makings of a great game, but technical glitches and the lack of online co-op prevent it from reaching its full potential. Despite its warts, it’s still a great value (800 MS Points, US$9.99) and a thin slice of nostalgic heaven.

By Herija Green
This entry was posted on Friday, September 3rd, 2010 at 1:19 pm and is filed under Herija Green, Video Game Reviews. You can follow any responses to this entry through the RSS 2.0 feed. You can skip to the end and leave a response. Pinging is currently not allowed.