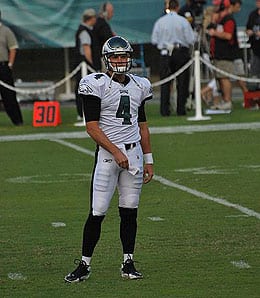 A new era has begun in Philly with Kevin Kolb taking over at QB.

Well, it’s all but official: Brett Favre is back for another season in 2010. How does old No. 4 stack up against the rest of the playing field from a Fantasy perspective? Find out below as the 2010 RotoRob NFL Draft Kit continues with a look at the top 25 quarterbacks.

The Fantasy QB debate used to be between Peyton Manning and Tom Brady, but it’s switched to Aaron Rodgers and Drew Brees. The reigning Super Bowl MVP is the steadiest selection, having averaged 4,575 yards and 30.5 touchdowns passing per season since joining the Saints in 2006. At 31, Brees is still in his prime and, like Manning, rarely takes shots. He throws a quick, accurate ball and makes smart decisions. All of which begs the question, why rank him behind Rodgers? We’re glad you asked…

Nobody at the position owns more statistical upside than Rodgers, who is deceptively athletic and rates among the game’s top scramblers (523 rushing yards and nine TDs in two years). He also owns a cannon for an arm, which allows him to take advantage of Green Bay’s excellent receiving corps. The 26-year-old is incredibly careful with the ball — seven picks in 541 passing attempts in 2009 — and posted monstrous numbers last year behind a patchwork offensive line. With another year of experience under his belt and improved o-line play, the sky is the limit.

There’s no wrong choice. It simply comes down to personal preference. Brees is safer, but Rodgers is still on the upswing of his career.

The NFL’s only four-time MVP, Peyton Manning continues to churn out 4,000-yard, 30-touchdown seasons, having accomplished the feat three times in four years. The primary drawback with Manning is a lack of meaningful late-season games. In fact, he hasn’t played more than a handful of Week 17 snaps since 2006. Despite his advancing age, Manning remains perhaps the game’s steadiest performer.

Brady missed nearly all of 2008 with a knee injury and never looked quite right last year. He still passed for 4,398 yards and 28 scores, but ten of them came in blowout wins over Tennessee and Jacksonville, leaving just 18 for the other 14 games combined. With another offseason to recover, Brady should be a more consistent producer in 2010 — that’s still not enough to move him back into the first or second rounds of drafts.

Despite posting gaudy numbers the last two years, Philip Rivers is often overlooked among the game’s elite quarterbacks. He’ll undoubtedly face unique challenges this year, namely the possible rejuvenation of the running game behind rookie Ryan Mathews (Rivers averaged 3,270 passing yards and 21.5 TDs in the two years before LaDanian Tomlinson’s decline) and holdout and subsequent placement on the Roster Exempt List of Vincent Jackson. That said, Norv Turner is a quality offensive mind, and Rivers still has a stud target in Antonio Gates.

Matt Schaub finally stayed healthy in 2009 and responded by throwing for 4,770 yards and 29 TDs even with Owen Daniels sidelined for half the season. Now that any remaining doubt about Schaub’s ability to perform has been erased look for him to skyrocket up draft boards. He’s still a risky selection, however, as one healthy season can’t completely eradicate past durability concerns. If he’s your No. 1 guy, make sure you address your backup spot with a mid-round selection.

Few quarterbacks have more talent to work with than Tony Romo, who adds rookie Dez Bryant to an already formidable receiving corps. In three full seasons as a starter, Romo has averaged 4,047 yards and 29.3 touchdowns passes, and he was far less careless with the ball (13 turnovers in 16 games in 2009 after 21 in 13 games in ’08). The issue with Romo is his week-to-week inconsistency. Last season he passed for one or no TDs on eight occasions and finished with less than 260 passing yards seven times. He’s a legit Fantasy starter, but he’ll have his share of stinkers.

Surrounded by young receivers, Eli Manning was penciled in by most for another 3,200 yards and 22 TDs in 2009. Instead, Manning broke out with his best statistical campaign as Steve Smith, Hakeem Nicks and Mario Manningham established themselves as NFL talents. And yet, no one should be surprised if Manning’s numbers dip this season. A huge factor in New York’s aerial assault was its inability to establish a running game, long a hallmark of Tom Coughlin teams, and if that unit rebounds we could see some statistical erosion. That makes Manning a somewhat risky choice early in drafts.

After more than a decade with Donovan McNabb at the helm, the Eagles are turning over a new leaf and going with unproven Kevin Kolb under centre. A pair of 300-plus-yard performances last year will no doubt have some owners psyched, but keep in mind he posted those numbers in a blowout loss versus New Orleans (when he also threw three picks) and an easy win over a poor KC team. There’s a lot to like here given Andy Reid’s disdain for running the ball — just make sure you secure an established backup in case Kolb flames out.

Jay Cutler’s first season in the Windy City was a mixed bag at best. With Brandon Marshall staying behind, Cutler had no go-to receiver and forced too many balls into coverage for a league-high 26 interceptions. Despite those struggles, the arrival of Mike Martz has created plenty of excitement as he’s stewarded some of the NFL’s most dynamic passing attacks. There figures to be a learning curve, and there’s no surefire stud receiver in Chicago, but the mere presence of Martz makes Cutler and his powerful arm perhaps the most intriguing risk/reward prospect at the position.

Joe Flacco progressed nicely during his sophomore season, easily surpassing his rookie totals with 3,613 passing yards and 21 touchdowns despite the lack of a legitimate No. 1 receiver. The Ravens moved to address that during the offseason, acquiring Anquan Boldin from Arizona and signing reinstated Donte’ Stallworth to supply a proven deep threat. With 32 career starts under his belt and more talent at his disposal this could be a breakthrough season for Flacco.

The move to Washington shouldn’t completely submarine McNabb’s Fantasy value, though there’s unquestionably fewer established threats in the passing game. Durability is perhaps a larger concern as the 33-year-old has missed 17 games over the past five seasons and no longer possesses the mobility he was once known for. McNabb is a safe pick with limited upside — pair him with a younger signal caller in the same borderline No. 1/2 range and play the matchups.

After throwing for 3,440 yards and leading Atlanta to the playoffs as a rookie, Matt Ryan was a popular semi-sleeper entering 2009. The reigning Rookie of the Year suffered through a tough second season, however, tossing a dozen picks in the first nine games and then missing almost three full games with a painful turf toe. Many are again forecasting big things for Ryan and the Falcons, but he’s best served as a strong reserve with starter upside.

Question: What is Brett Favre’s favuorite food? Answer: A waffle. Get it? A waffle! I’ll give you a second to let that sink in…OK, we good? Favre’s annual retirement dance aside, the old man can still get it done. He was phenomenal in 2009, amassing 4,202 passing yards and 33 touchdowns against just seven interceptions. However, the clock has to run out of Favre eventually (he turns 41 in October) and some slippage is to be expected. Like McNabb, Favre would be a great guy to pair with a high upside option.

Tossed into the fire courtesy of a season-ending injury to Chad Pennington, Chad Henne endured an up-and-down campaign. His final numbers — 2,878 passing yards, 12 TDs, 14 INTs — weren’t awe inspiring, but keep in mind he passed for over 320 yards three times in the final five weeks. Oh, and Miami did get that Marshall guy from Denver. Lots of potential here…Ben Roethlisberger obliterated his previous career high with 4,328 passing yards last year. That’s the good news. The bad news is that his off-field antics netted him a six-game suspension to open the season, though with good behavior it could be reduced to four. Personnel-wise, second-year WR Mike Wallace should take some of the sting out of losing Santonio Holmes. Roethlisberger is a great player to stash on your bench as he could become your starter or possibly a valuable trade chip later in the season.

In ten starts last season, Vince Young exceeded 250 yards passing only once, and he’s a distant second to Chris Johnson in Tennessee’s offensive pecking order. Still, Young is a gifted athlete and could run for 400- or even 500-plus yards, making him a viable backup…Much like Young, David Garrard adds a lot of value with his legs (he’s run for 645 yards and five TDs the past two years) and is a more accomplished passer. However, his inability to produce in the red zone — he failed to throw a touchdown pass eight times in 2009 — makes him a sketchy week-to-week option. Draft Garrard as a solid reserve…Matthew Stafford did his best last year to make chicken salad out of, well you know, but the final numbers (2,267 passing yards, 13 TDs, 20 INTs in ten games) weren’t pretty. On the plus side he’s got a beast to work with in Calvin Johnson, and the team continues to surround him with better players such as Jahvid Best. Expect improvement with more growing pains mixed in…Heading into 2009, Alex Smith appeared poised to add his name to an inauspicious list of No. 1 pick washouts that includes Tim Couch and David Carr. Instead, Smith re-emerged as a legitimate NFL quarterback, tossing 18 touchdown passes in 11 games (ten starts). With a pair of difference makers in Michael Crabtree and Vernon Davis at his disposal, Smith is the most interesting option in this group.

Carson Palmer’s days as an elite signal caller are done, but with Chad Ochocinco and Terrell Owens in the fold he makes an intriguing reserve with upside…The retirement of Kurt Warner turns the keys to Arizona’s offense over to former collegiate superstar Matt Leinart. The southpaw started 11 games as a rookie before spending most of the last three seasons holding a clipboard. Even with a more conservative approach offensively from the Cardinals in 2010, there’s too much talent in the passing game not to at least give Leinart the chance to take shots down the field. Consider him a sneaky upside selection late in drafts…A strong postseason camouflaged what was a bumpy rookie campaign for Mark Sanchez, who had 20 interceptions against just 12 touchdowns. A year in the system and 18 games worth of experience should help, as should the addition of Holmes. However, the Jets remain a team built around defense and controlling the clock, which is hardly conducive to a pass-heavy game plan…Don’t be too quick to write off Matt Cassel as a one-year wonder despite a shaky first season with the Chiefs. He’ll be under the tutelage of Charlie Weis this year, and the addition of rookie Dexter McCluster gives the Chief passing game another another dynamic weapon for him to work with. Nab Cassel as a backup to a strong No. 1 starter… The Raiders finally cut bait on former No. 1 pick JaMarcus Russell, who couldn’t stay under the NFL’s “Calorie Cap” (rim shot!), and are moving forward with former Redskin QB Jason Campbell. The Auburn product is clearly an upgrade over Russell, but it seems like a stretch to expect more than the 3,618 yards and 20 touchdowns Campbell amassed in 2009.

By HC Green
Tags: 2010 NFL Draft Kit
This entry was posted on Wednesday, August 18th, 2010 at 2:51 pm and is filed under 2010 RotoRob NFL Draft Kit, Cheat sheets, FOOTBALL, Herija Green. You can follow any responses to this entry through the RSS 2.0 feed. Both comments and pings are currently closed.