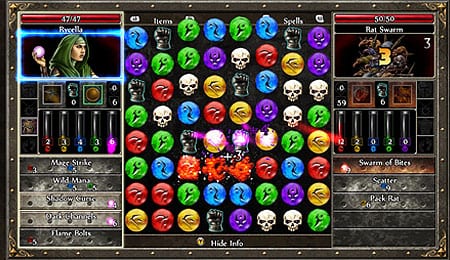 Puzzle Quest 2 adds enough new wrinkles to be addicting all over again.

Built off the simplistic match-three formula of Bejeweled, Puzzle Quest took that basic premise and added role-playing elements to create a surprisingly deep and hopelessly addictive game back in 2007. Now, Infinite Interactive has returned with Puzzle Quest 2, a sequel that retains the original’s format while supplementing it with a few new twists and more of everything you loved.

In a turn-based strategy game, the controls need only not get in the way, and Puzzle Quest 2 smartly maps its few distinguishing features to the bumpers and triggers. No complaints here.

The gems look bright and colourful, and the exploration screens look decent enough as well. The visual highlights are the hand drawn character/enemy art you’ll encounter when battles begin or you unleash a weapon attack, though there’s nothing here that flexes the Xbox 360’s graphical muscle.

There are little snippets of voice work here and there, and that minimalist approach carries over to the sparse musical score as well. The sound effects and enemy cackles are pretty enjoyable, however, and the sound that plays at the onset of battle is cool.

Like the original, Puzzle Quest 2 contains a formulaic back story of stopping evil, which serves to keep your character moving forward from one quest to the next. The view has been changed, though, zooming in to show grids of an area rather than the world map seen in the first one. You still don’t move around freely. Instead, you choose from destination points on each grid such as enemies, treasures, NPCs and doors to interact with.

Once you engage an enemy, the puzzle mode kicks in. Standard battles still take place in an 8×8 format populated by coloured gems, skulls and gauntlets. The gems are matched to build up your supply, which allows you to cast offensive, defensive and support spells. The skulls do instant damage while the fists are a new addition to the series. These are essentially action points — amass enough of them and you can utilize your equipped weapon to attack your enemy.

The ability to equip armour and weapons and freely utilize them during combat is arguably the biggest change from Puzzle Quest. You’ll constantly be looking for better equipment to replace your old stuff as well as using the items you find to upgrade them. Things like armour and shields enhance your defensive capabilities whereas weapons can inflict significant damage. It definitely freshens up the formula.

Another addition is a series of mini-games that pop up when interacting with various objects. Treasure chests are looted by matching goblets, coins and crowns — match enough and they’ll create chests…match three of those and get new items. You’ll also find other variations of this when it’s time to smash doors, disarm traps or explore rooms for hidden items. They’re similar to the main battles to be sure, but they’re different enough to provide a nice alternative as you progress.

Puzzle Quest 2 also offers some variety by allowing you to select from four different character classes, each with their own pros/cons. Barbarians are brutes with powerful weapons and offensive spells while assassins are more defensive and damage their opponents through the use of poisons. Each class has its own list of spells to learn and weapons to collect, allowing for plenty of customization.

Online multiplayer is provided, either in straight head-to-head or Tournament Mode. The latter is a new addition that allows you to pick four monsters from the game to go against your human opponent. It’s solid, but each fight is quite time consuming so make sure you’re in a patient mood before venturing online. There’s also a quick battle mode that allows users to face off against the game’s lineup of foes and earn more experience/items for those that want to do a little grinding outside of the main quest.

Like its predecessor, Puzzle Quest 2 is, in a word, addictive. The battles are enjoyable (even if the A.I. seems to get “lucky” a bit too often) and the game is constantly pushing you toward your next objective. Given all the hours you can sink into it, Puzzle Quest 2 is an absolute steal at 1,200 MS Points (US$15).

By Herija Green
This entry was posted on Thursday, July 15th, 2010 at 9:17 am and is filed under Herija Green, Video Game Reviews. You can follow any responses to this entry through the RSS 2.0 feed. You can leave a response, or trackback from your own site.