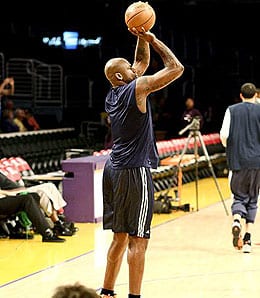 With a frontcourt featuring the injury-prone Nene and Kenyon Martin (the latter could miss the start of the season after knee surgery), adding frontcourt depth was probably the biggest concern facing the Denver Nuggets this offseason.

Well, it seems they achieved that goal with word circulating Wednesday that power forward/small forward Al Harrington will sign a five-year, $34-million deal with the Nuggets.

Harrington may be a bit undersized at the four, but no one questions his ability to score in bunches, whether starting or coming off the bench. With Carmelo Anthony, Chauncey Billups and J.R. Smith leading the way, Denver already boasted the third best offense in the NBA. Now imagine a second unit featuring both Smith and Harrington – this team could easily be the highest scoring team in the association next season.

While Harrington only saw 30.5 MPG of action last season, he still enjoyed another productive campaign, averaging almost 18 PPG with 5.6 RPG. Don’t look for blocked shots from Harrington (not that Denver needs too much help with Chris Anderson, K-Mart and Nene all capable shot blockers), but I wouldn’t be surprised to see him get more burn in Denver given the brittle nature of the starters ahead of him, especially at the beginning of the season with perhaps both Martin and Anderson out in the wake of knee surgeries.

Dallas was also looking at Harrington, but after Udonis Haslem turned down Denver’s offer and took less money to stay with Miami, the Nuggets swooped in and used their mid-level exception to grab Harrington. The beauty of Harrington is that over his career, he’s been virtually as effective whether he’s starting or coming off the bench. Sure, he’s got his baggage – there’s a reason this will be his fifth time he’s switched teams since 2004 – but so do K-Mart and Smith, and that didn’t stop Denver from racking up a third straight season of at least 50 wins.

Harrington’s arrival likely means the end of Linas Kleiza in a Nugget uniform. It’s doubtful that Denver will match Toronto’s offer for Kleiza now that Harrington has arrived, and that’s good news for the Raptors.

Cleveland, a team that badly needs to add depth, was also interested in Harrington.

By RotoRob
This entry was posted on Wednesday, July 14th, 2010 at 11:48 am and is filed under BASKETBALL, RotoRob, Transactional analysis. You can follow any responses to this entry through the RSS 2.0 feed. You can leave a response, or trackback from your own site.