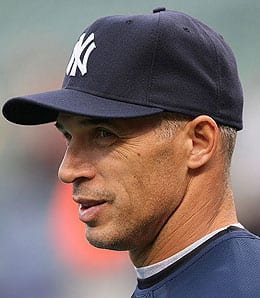 Joe Girardi has skippered the Yanks to the best record in baseball.

Has anyone noticed who suddenly has the best record in baseball? Well, it’s none other than Joe Girardi’s New York Yankees. Yes, thanks to a recent tailspin by the Rays, the defending World Champions are back atop MLB’s leaderboard. Fuck, I hate the Yankees. Just saying…

Don’t look now, but David Ortiz is mired in a 1-for-16 slump. He did manage to score a couple of runs Thursday night – but then again, I think a few of the ushers at Coors Field scored in that slugfest – but was just 1-for-5 for the night, and that marked his first base hit since last Friday. Big Papi allayed fears that he was off to another ridiculously slow start when he erased an awful April (.143, one homer, four RBI) with a blistering May (.363, ten homers, 27 RBI).

Well, take a look at his June numbers (.216, four homers, 15 RBI) and you’re left with a player who’s almost directly in the middle of those two extremes. Of more interest in the Fantasy scheme of things is that with his two appearances at first base in Colorado this week, Ortiz now has three games under his belt defensively, a significant development for leagues in which five games are needed to qualify. If he gets another couple of games at first base this weekend in San Francisco, Ortiz’s value will rise in some leagues.

But the larger question remains: is Ortiz now the hitter who struggled in April, ripped the cover off the ball in May, or the mediocre one who has shown up so far in June?

Wow, Houston actually two of three from the Giants this week for its first series win since taking three of four from the Rockies in early June. The Astros’ reward? An all-Texas series in Arlington this weekend against the Rangers, winners of 11 straight games. Uh, good luck with that, guys. The Astros were led to victory Thursday behind an impressive six-inning, no earned runs allowed performance by Wandy Rodriguez, who finally pitched more like Wandy Rodriguez than Wanda Sykes.

We had Rodriguez ranked as a top 20 starter back in mid-April, but after a solid April, he’s been among the biggest disappointments in the game, and just another reason why the Astros win just slightly more regularly than a Haley’s Comet sighting this season. Hell, he’s barely been a top 200 hurler this year.

Having said that, after a simply pathetic May, Rodriguez looked to be smarting up with quality outings in his first two June starts. Then, he tossed another pair of serious stinkers before his solid start Thursday. The fact that it came against an offense like San Francisco’s, that’s been middling at best, doesn’t exactly swell me with confidence that Rodriguez is out of the woods. I mean, come on. His walks are way up, his strikeouts are way down and his hit rate has soared. There’s just not much to hang your hat on as far as being a hopeful Rodriguez owner goes. The fact that he’s generally been a worse second half pitcher paints an even grimmer picture.

I’ll tell you this much: I sure as hell don’t want to assume his troubles are over and have Wandy active for his next start in Milwaukee against an excellent Brewer offense. But if he does sparkle in that outing, it may be an opportune time to jump back on Rodriguez’s bandwagon. One consideration is that when Houston’s long-rumoured fire sale begins, Rodriguez could find himself in a winning environment where at least he’ll be far more likely to bag some Ws. There you go…so there is hope.

By RotoRob
This entry was posted on Friday, June 25th, 2010 at 5:56 pm and is filed under BASEBALL, MLB Today, RotoRob. You can follow any responses to this entry through the RSS 2.0 feed. You can skip to the end and leave a response. Pinging is currently not allowed.