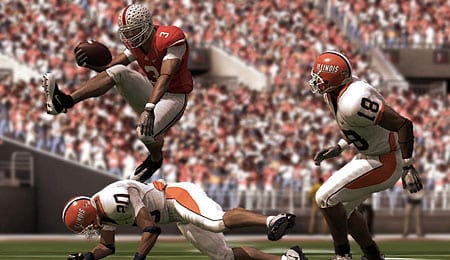 The photo realistic replays in NCAA Football 11 are truly impressive.

I love football. It utterly consumes my weekends for four-plus months of the year, and that doesn’t even cover all the nights I’ll throw it on as background noise. I’ve always been partial to the NFL, but there’s something undeniably appealing about the collegiate game. It is equal parts passion and pageantry, a place where gimmick offenses can flourish and getting the right player in the right system can make all the difference.

NCAA Football 11 captures all the things that differentiate the collegiate experience better than any game I’ve seen, highlighted by smoothed out controls, program-specific offenses and an updated Online Dynasty mode that promises to cut office productivity nationwide.

I’ve been playing the NCAA and Madden series for a long time now, and the addition of “locomotion” is a major step forward in getting players to move in a more lifelike fashion. Gone are the abrupt left/right juke moves and canned shoulder lowering animations. In their place are more fluid controls, allowing you to make minor adjustments to navigate running lanes, cut back against pursuit and string together moves to organically create big plays.

Another boon to the ground game is the retooled blocking A.I., which drastically reduces the number of free releases and blown assignments seen in previous iterations. It’s great to watch guards pulling and lanes being cleared competently because it helps open up the playbook. Draws, for example, have been a complete disaster in years past, but now they’re actually a legitimate weapon.

The passing game hasn’t changed much, and if there remains a weakness in the blocking it’s the number of sacks absorbed on play-action passes while you’re still in the “fake handoff” animation. On the plus side, greater sideline awareness has been added with receivers stutter stepping to get a foot down or halting their momentum to turn upfield rather than sprinting out of bounds.

Annually updated sports titles have taught us to expect incremental improvements, particularly in the visual department. That isn’t the case here. NCAA Football 11 looks markedly superior to its predecessor in every regard. The aforementioned locomotion creates more natural looking movements, which combined with improved lighting effects, spot-on uniform detail and much less plastic looking skin tones makes for easily the best looking player models in the series’ history.

The way they interact with each other is another high water mark with players realistically responding to contact. It’s great to see defensive backs furiously attempting to strip the ball as your wideout is twisted to the ground or watch as your back lowers his shoulder to absorb contact and then stumbles down amid a futile attempt to maintain his balance.

Electronic Arts has finally integrated ESPN’s broadcast presentation into the game, including the same graphical overlays you’d see on Saturdays and a vastly improved replay system. it has also revamped the menus and in-game play calling to excellent effect. Add that to the beautifully rendered stadiums, pre-game run-outs (which included numerous signature entrances like “The U” emerging from the smoke) and cool post-game highlight packages and you’ve got a great looking game.

Where NCAA Football 11 fails to make meaningful progress is the commentary where Brad Nessler and Kirk Herbstreit return sans Lee Corso. The departure of Corso could be classified as addition by subtraction as his quips added little to the game, but beyond that it is business as usual. Hopefully next year we can get announcing that’s more lively and reactive — things like referencing big games the following week or actual excitement when a key play is made late in an important game. Other sports titles have proven it’s possible, and it’s time for EA to get on board.

Sound effects are typically strong, including signature chants at stadiums and a full array of school fight songs. You also have the option to create your own custom stadium tracks.

The improved running attack and presence of team-specific offensive styles really amps up the game play in NCAA Football 11. I focused on the former during the controls section, but the latter is every bit as critical to the game’s success as it’s refreshing to play as (or against) five different teams and get five totally unique experiences.

One cool addition this year is the ability to legitimately run a no-huddle offense. In the past, going without a huddle meant holding down “Y” and watching your squad line up to run the same play. Sure, you could audible to a handful of calls, but it wasn’t designed to be anything more than a late-game desperation option. That has completely changed.

Yes, holding down “Y” still hurries your team to the line of scrimmage, but as they hustle you’re able to scroll through any play from the formation your last play was called from — for example, if you were in the Shotgun you’d have access to all of that formation’s sub-packages. It’s a lot of fun to direct your offense on the fly like that and is beautifully implemented.

Despite the improvements some longtime issues continue to crop up. The superhuman range of collegiate middle linebackers in coverage remains as they’ll still nab interceptions they have no business even getting their hands on. The A.I. also makes some terrible reads when choosing running lanes, such as cutting back into traffic when the edge is available (the opposite of “running to daylight”). Overall, though, this is the best representation of the sport to date.

NCAA Football 11 once again revolves around two modes: Dynasty and Road to Glory. The latter returns basically unchanged as you create a player and guide him from the high school state championship through the entirety of his collegiate career.

The CPU calls all the plays and it’s up to you to execute them. Of course, the play calling can be downright bizarre (play-action down 17 points? Really?!), and your teammate A.I. seems to be much worse here than in other game types, particularly the incredible number of dropped passes. It’s a decent secondary mode, but lacks depth and could really benefit from some retooling.

Dynasty mode is where you’ll likely be spending most of your gaming hours, balancing the on-field business of winning football games with the off-field recruitment of talent. That process of adding fresh faces has been overhauled into a more hands-on experience. Every week you’re given ten hours to spend on recruitment calls. Each call lasts between ten minutes and an hour depending on how many subjects you’d like to discuss.

Once you decide how many minutes to spend the game randomizes the topic to talk about. There are over a dozen topics, ranging from the condition of facilities to your school’s ability to offer playing time early on. When the topic has been selected you’re given the option of pitching your school in that area, asking how important that item is to the recruit or comparing your performance to a rival’s in an effort to increase interest in your program while decreasing it for the competition.

Those aren’t the only options at your disposal, however. You’re also able to change the subject a limited number of times per call, as well as making promises (such as no redshirting or that they’ll earn a spot on the freshman All-American team). Get their interest high enough and you can invite them to visit your campus where you’re able to schedule three activities based on their likes and dislikes. It can be quite time consuming, but the new method makes it more of a mini-game and less of a grind.

Easily the biggest off-the-field additions this year are to the Online Dynasty mode, which has brought the ability to manage your team on your PC or other wireless devices via the Dynasty Anywhere feature. After having played Madden NFL 2010’s online Franchise mode, it certainly appears EA learned some lessons as the tools accessible on the league-specific web site work much better than their Madden equivalent.

Another cool addition is the new Dynasty Wire, which allows users to write summaries or talk trash about their games through the StoryBuilder. On top of text you can also have action photos that are automatically uploaded following games as well as highlight clips. I’m a sucker for this kind of stuff, and I do think that adding more tools to encourage interaction will only help as nothing submarines an online league faster than deadbeat owners. It’s impossible to know if gamers will embrace the new features and take advantage of their potential, but it’s certainly an upgrade over previous efforts.

NCAA Football 11 represents a substantial step forward for the series with several major improvements (running game, team-specific offensive styles, recruitment) along with the significant new additions to the Online Dynasty mode. This is easily the best representation of college pigskin to grace the current generation of consoles, and football fans should go out of their way not to miss it.