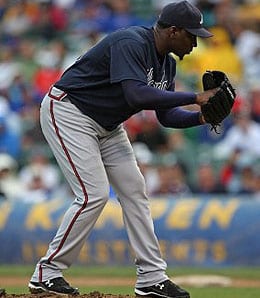 Lights out work from closer Rafael Soriano has helped the Rays shoot up the charts.

This is the debut article of our newest writer, Trevor Blake. Please welcome him aboard as he’ll be contributing baseball, basketball and football content for the site. He’s been doing MLB Power Rankings for a while

The Texas Rangers continue to stay in the top five, breaking into a region that’s generally reserved fo AL East teams, with three of the five clubs from this division ranking in the top five. The Rangers have been propelled by the play of Josh Hamilton and a resurgent Vladimir Guerrero, who has already surpassed his 2009 numbers with 19 homers, 72 RBI, a .330 BA and an OPS of 944 OPS.

Biggest Jump: The Detroit Tigers jump five spots from 14 to 9, breaking into the top ten in the majors.

1. (1) New York Yankees, 53-31: With seven players on the All-Star roster, this powerhouse team is a huge threat to repeat as champions if they can hold up through the second half of the season. New York aims to tie a season high with its sixth straight win Thursday and Andy Pettitte’s remarkable return to prominence has been a big reason why the Yanks again top this list.

2. (4) Tampa Bay Rays, 51-33: Thanks in no small part to closer Rafael Soriano’s 23 saves and 1.65 ERA, the Rays move higher up the rankings. Considering how hot they are (they’ve won five straight and seven of their past eight), I bet the Rays aren’t exactly looking forward to the All-Star break.

4. (3) Boston Red Sox, 49-36: This team can’t seem to avoid the injury report. With Dustin Pedroia (broken left foot) and Clay Buchholz (hamstring) joining many of their teammates on the DL, they just can’t catch a break (other than a broken bone, that is). Getting swept by the Rays this week really hurts.

5. (6) Atlanta Braves, 50-35: In Billy Wagner’s last ten appareances, he has eight saves, one win, and one blown save. During this stretch, he has only given up one run. Walking into Philly and taking 2-of-3 this week, the Braves played with a swagger we haven’t seen since their run of division titles ended after 2005.

7. (7) Cincinnati Reds, 49-37: Cincy’s explosive offense has propelled the team to a 5-2 start to its 11-game road trip to end the first half going into the All-Star break.

8. (11) New York Mets, 47-38: Johan Santana pitched a complete game shutout against Cincinnati, and even managed to blast off a solo home run in the game. Jonathon Niese, meanwhile, finally lost, but he continues to pitch very impressively.

9. (14) Detroit Tigers, 46-37: The Tigers have won five of their last six games to move a game ahead of the White Sox and one and a half up on the Twins and are riding into the All-Star break behind Miguel Cabrera’s hitting. For Detroit, it’s all been about home cooking — its 30-12 mark at Comerica is the best home record in the AL.

10. (10) St. Louis Cardinals, 45-39: Between Adam Wainwright, Chris Carpenter, and Jaime Garcia’s pitching and Albert Pujols’ hitting, this team is chasing the Reds very closely. However, it’s been a tough week as on Thursday afternoon, St. Louis will be looking to avoid a three-game sweep in Colorado.

11. (8) Minnesota Twins, 45-39: Last week, they won 2-of-3 against division rivals, the Detroit Tigers, and outscored them 21-12. However, the pitching staff has not looked sharp lately, and that’s a concern heading into the second half.

12. (12) Los Angeles Dodgers, 46-38: The Dodgers have won six of their last nine games including a sweep against the Giants and hope to make a move on the first place Padres nearing the break. The problem, however, has been their play at home. LA’s home record — once among the best in baseball — has slipped to 25-17 thanks to a recent 2-7 skid. You’ve got to take care of business at home.

13. (9) Los Angeles Angels, 46-41: After Guerrero launched two home runs, including a grand slam, off Scott Kazmir, I bet the Halos were missing having Vlad as their power hitter. Now they’re having problems with the White Sox, and a loss Thursday would mark the first time the Angels got swept in a four game series in Chicago in almost 30 years.

14. (15) Philadelphia Phillies, 43-40: Roy Halladay pitched his 7th complete game of the season Monday, and now the Phils are looking to possibly get Cliff Lee back. Strangely, though, it’s been the offense that has been problematic as a team that led the NL in scoring last year is just sixth currently and the loss of Chase Utley won’t help.

15. (13) Colorado Rockies, 46-38: Even though Ubaldo Jimenez is 14-1, his last several starts have not been the same, as he allowed 16 runs in the month of June compared to seven in the previous two months combined. He gave up another seven runs in his first July start, yet the Rockies have actually been playing pretty well of late, taking the first two games of their three-game series with the Cards.

16. (17) Chicago White Sox, 45-38: The recent surge by the Sox has created a suddenly close race for the AL Central as the Pale Hose are only one game back and in second place. A healthy Freddy Garcia has made a big difference, but now the team may be without Jake Peavy for the rest of the season.

17. (16) San Francisco Giants, 44-40: Tim Lincecum had lost his last two starts before beating Milwaukee Wednesday, and he needs to get his mojo back if the Giants are going to make he playoffs. On the plus side, Buster Posey has had a tremendous effect on the offense.

18. (19) Oakland Athletics, 41-45: Until getting rocked by the Yanks Tuesday, Trevor Cahill had won his last seven decisions and brought his ERA down to 2.74 (it’s now back to 3.17, but it’s still very impressive considering how bad he got rocked in his first start of the season).

20. (20) Florida Marlins, 40-44: Josh Johnson is all I would need to say, if the rest of their team could win more. Apparently, he can’t carry the team by himself. And now that speculation of a new manager has ended as the team has given the job to Edwin Rodriguez for the rest of the year, it’s time for the Marlins to make a move.

21. (22) Washington Nationals, 38-47: Even though Stephen Strasburg has gone 0-2 his last four starts, we must remember that he is a rookie and he will become a great player in the future. On offense, Adam Dunn has exploded and with a win Thursday, the Nats could sweep the Pads for the first time in seven years.

22. (23) Chicago Cubs, 38-47: Carlos Zambrano’s conflict and suspension shows how the Cubs season is going. It won’t get any easier starting Thursday with a series against the Dodgers in LA, where they’ve dropped seven of their last 11.

23. (21) Milwaukee Brewers, 37-48: Yovani Gallardo was placed on the DL Tuesday, a loss that will significantly hurt the Brewers, who has been outscored 27-4 in the first three games of their series against the Giants. Yikes.

24. (24) Kansas City Royals, 39-46: Zack Greinke has won his last four decisions, however, the Royals are eight games behind the bunched-up trio at the top of the AL Central.

25. (25) Seattle Mariners, 34-50: Cliff Lee has won four straight, but now the Mariners might trade him away. Seattle faces Pettitte Thursday, a pitcher it’s had some success against over the years.

26. (27) Houston Astros, 34-51: Chris Johnson went 14-for-32 on Houston’s ten-game road trip, but the rest of their team batted .217. He might be getting some help, though, as Carlos Lee and Lance Berkman seem to be finding their power strokes.

27. (26) Cleveland Indians, 33-51: They allowed just 23 runs in 82 innings until giving up 12 a dozen in nine innings on Tuesday. Despite their improved recent play, however, the Indians remain in dead last in the AL Central as fourth-place KC has been even hotter lately.

28. (28) Arizona Diamondbacks, 32-53: The D-backs’ hitters have averaged 9.33 whiffs per game this season (including at least 10 for five straight games, matching a franchise record), and have an MLB-leading total of 793 strikeouts in 85 games, putting them 120 up on the next closest team. Clearly, since being named manager of the team, Kirk Gibson hasn’t provided a spark to the Snakes.

29. (29) Pittsburgh Pirates, 30-54: The Buccos finished June with a 6-20 record — by far the worst mark in the majors. The Daniel McCutchen experiment is over. He wasn’t bad in his six starts last season, but has been drilled this year, prompting the Pirates to send him down to Triple-A Thursday. Addition by subtraction?

30. (30) Baltimore Orioles, 25-59: There’s nothing I can really say about how bad the Orioles are playing this year. They somehow managed to win five of their last six in June, only to lose six of their seven games in July. And to think that this is the same team that finished ahead of the Pirates and the Nationals last season!

By Trevor Blake
This entry was posted on Thursday, July 8th, 2010 at 3:02 pm and is filed under BASEBALL, MLB Power Rankings, Trevor Blake. You can follow any responses to this entry through the RSS 2.0 feed. You can leave a response, or trackback from your own site.