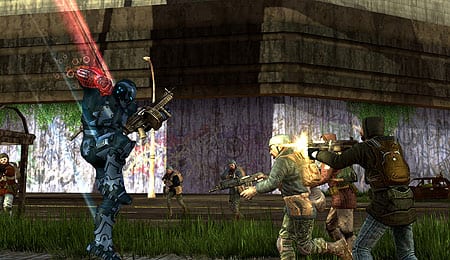 When the fist glows red, your enemies…wait, I had something for this…

Long before I submitted my first game review I had written tens of thousands of words on professional athletes, covering the gamut from opinionated pieces to the mundane — such as scouting reports and trading cards. Along the way I conducted numerous interviews and grew annoyed by an axiom athletes were using to answer questions. That popular phrase: “It is what it is.”

Well, while playing through Crackdown 2, that same expression kept rattling around in my head, and it may just be the perfect description for a title that’s shallow on story and originality yet still enjoyable enough to lose yourself for hours at a time.

Few games in recent memory have frustrated with their controls more than Crackdown 2. When you’re jumping effortlessly from rooftop to rooftop and mowing down foes hundreds of feet below it’s an absolute pleasure to play. Conversely, when you’re being bombarded by rockets and can’t switch your auto-lock aiming from the inanimate vehicle to the enemy soldier firing at you, it’s infuriating. Melee combat is also highly imprecise. Your ability to absorb damage mitigates these issues to some extent, but it’s still exasperating.

Traveling in vehicles never feels like much fun either, as none of them handle that well, and in fact it’s generally quicker just to jump around the level (at least once your agility skill has been leveled up). Of course, climbing isn’t without problems, either, though most of those are graphical/design issues where it’s not always clear which parts of buildings can be grabbed and which can’t.

Favouring the same cell-shaded look as the original, Crackdown 2 isn’t going to be mistaken for God of War 3 any time soon. While I’d stop short of calling it outright ugly, the game recycles the city’s inhabitants at a fever pitch and features no end of forgettable locations. You’ll see hundreds of enemies filling the screen at times, which leads to some chaotic firefights, but the frame rate stutters when too many objects and explosions appear on screen at once.

Your Agent looks decent when you swing the camera around him to get a tight look. Unfortunately there’s no customization outside of choosing from a handful of colours to alter his armour accents. Leveling unlocks nothing new appearance wise, and outside of the first 20 minutes you never see his face again.

The audio doesn’t have much personality beyond the voice of your handler, who sounds like someone doing a parody of an official sounding bureaucrat. I liked his commentary for the most part, though I grew tired of his chastisements about wandering too far from a location or accidentally killing a civilian that was in the middle of a war zone. The weapon/explosion sound effects are satisfying while the soundtrack does little more than blend into the background.

Set ten years after the events of the original, Crackdown 2 brings players back to Pacific City, which has fallen into disrepair. A virus is tearing through the population, creating Freaks, a group of pseudo-zombies that only venture out at night (think I Am Legend). The Agency has a solution, but a civilian uprising known as the Cell doesn’t approve of its approach and is creating all sorts of problems. That means it’s up to you, a super-powered Agent, to wrest control from these two forces and restore peace to Pacific City.

That’s the basic setup, but in reality the story plays second fiddle (and even that’s being generous) here as outside of some audio recordings and basic information given by your handler there’s no real advancement to the narrative or characters to relate with. Those that crave a compelling story as part of their gaming experience will be severely disappointed.

The main quest has you activating a series of absorption units, which triangulate a location for a beacon drop. Defend the beacon for a short time and you’re done. Rinse and repeat. There’s a small section after that leading to a forgettable ending, but the primary mission is not very long. However, as anyone who played the original can already tell you, Crackdown 2 isn’t about that. Instead it’s all about collecting objects, completing secondary objectives and more or less just running around town acting like a complete badass.

You already start out fairly tough, but as you progress you’ll gain experience and level up in five different areas — agility, strength, guns, explosives and driving. It’s pretty straightforward. Use a skill and you’ll earn orbs. Collect enough of them and your skills will increase. Agility orbs are scattered about Pacific City and must be found. Driving orbs can be earned by winning races, completing stunt challenges or just running down enemies in your car and so on. It’s a highly addictive process.

It’s within this ongoing hunt for orbs and your push to max out attributes that Crackdown 2 finds its legs, and because it’s such a lengthy commitment you’ll find hours melting away. However, what’s really cool about the game is that you don’t need to play for hours at a time to accomplish things as it lends itself perfectly to 15- or 20-minute bursts where you might focus on one skill or tackling a single objective. For better or worse there are no lengthy quests or checkpoints here.

Beyond the hunt for hidden orbs, audio recordings and challenges, another fun activity is simply to kill enemies with style. Scale a tall building, spring down into a horde of Freaks and unleash a ferocious ground strike to send body parts scattering. Beat a group of Cell flunkies to death with a lamppost. Plow into a sea of enemies with the Agency SUV. Mow them down with the chopper. There’s definitely no shortage of ways to bring the pain here, and they’re all eminently satisfying.

Crackdown 2 supports four-player co-op online via Xbox Live, and the game is really at its best when you’ve got teammates. Considering you’re rarely fighting fewer than a dozen enemies at once, it’s nice to have someone on your side, even if the game omits some opportunities for streamlined teamwork — waypoints, anyone? — and leaves you to track each other by arrows on your radar. The game ran very smoothly when I was the host, but I did experience a couple instances of freezing when I joined other people’s games.

There’s also a 16-person competitive multiplayer offering, though it contains just three modes (Deathmatch, Team Deathmatch and Rocket Tag) and feels unbalanced with conventional guns having minimal effect despite the continued presence of auto-aim. That leads to lots of grenade tosses and melee blows. I also had trouble staying in games as my connection to the server was routinely lost. Having said that, it’s hardly unheard of for a game to have issues with its server in the early going, so hopefully things will get squared away.

Crackdown 2 has minimal story elements, frustrating controls, dated graphics and it could be viewed by some as simply an incremental step above the original…and yet I still had a blast. Sometimes we get caught up in what a game doesn’t do rather than what it does. Don’t let that be the case here as shooter/action fans that pass up Crackdown 2 will be missing out. It is what it is — a lot of fun.

By Herija Green
This entry was posted on Wednesday, July 7th, 2010 at 10:31 am and is filed under Herija Green, Video Game Reviews. You can follow any responses to this entry through the RSS 2.0 feed. You can skip to the end and leave a response. Pinging is currently not allowed.