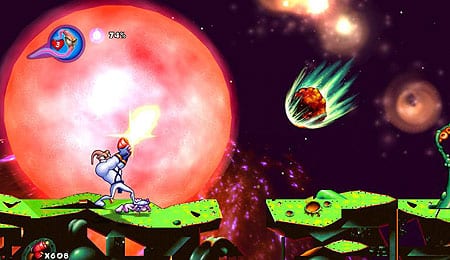 The bizarre world of Earthworm Jim has been transformed into hand-drawn eye candy.

I have three distinct memories of Earthworm Jim on the Sega Genesis — it was difficult, bizarre and it was in the system when our house was burglarized. Now, 16 years later, Gameloft has gussied up the world’s grooviest invertebrate with the release of Earthworm Jim HD. The new visuals look sharp, but some antiquated gameplay elements will undoubtedly frustrate gamers.

Although there’s nothing wrong with the way the old three-button Genesis control scheme has been mapped to the Xbox 360 (I like that both “X” and the trigger fire), the game itself feels most outdated here. There are just too many things you can’t do; like the inability to fire your gun while in the air or to jump vertically from a hanging position. Is it authentic to the original? Yes. Does that make it less frustrating? No. Fans of the series know what they’re getting into, but newcomers may find these limitations archaic.

Colourful, crisp and beautifully rendered, the retouched graphics in Earthworm Jim HD look excellent, and it’s a testament to the game’s original art design how distinctive it still is so many years later. While the game may lack any real coherence from one level to the next, it allows for plenty of totally unique settings and a really varied graphical palette.

I have mixed feelings about the audio. The soundtrack itself is good and really adds to the game’s overall aesthetic. However, the purposely goofy sound effects can get old after a while, as can the newly-voiced Jim yelling “PLASMA!” The dialogue is decidedly sparse, though, relegating that drawback to little more than an annoyance.

One of the stranger games you’ll ever play, Earthworm Jim HD is an old school platforming title that extends across seven essentially unrelated levels. The game’s minimal story — you’re an ordinary earthworm that found a spacesuit — is played for laughs and provides little more than an excuse to visit odd locations and battle bizarre enemies. Along the way you’ll be asked to complete a variety of tasks such as piloting a submarine, bungee jumping and escorting an aloof dog to safety. With so many different elements the levels can be hit or miss.

Jumping and shooting are the two constants, but as noted earlier the controls tend to get in the way and it’s a continuous reminder that games have improved in this regard over time. Another issue is that it isn’t always clear which objects in the environment can be interacted with and which cannot, making initial treks little more than trial and error sessions. Unless you know your way around I’d recommend going through on Easy difficulty the first time to reduce the number of deaths, as the higher settings can be downright unforgiving.

I also found the lack of clear direction to be annoying as there are times when it’s really unclear what the game expects you to do. An early example of this would be on “What the Heck?” where the game wants you to run in place on a green gem. However, it never tells you this so I spent several minutes shooting it, jumping on it and whipping it before locating a walkthrough on YouTube. I realize modern games can be overly helpful, but this felt a little too vague.

Once you get a feel for the levels, the game can be completed in around an hour. That isn’t very long, though the lasting appeal in games like this is streamlining your approach to clearing levels to shave seconds off and take less damage. Your best times can be compared to others via online leaderboards, and it’s a nice carrot to extend the replay value.

Earthworm Jim HD also offers three new single-player levels (unlocked during the original story) and an online/offline multiplayer. The new stages feel like worthwhile additions, providing more bizarre enemies and bosses to vanquish. Multiplayer is solid and presents a unique twist by making it both cooperative and competitive simultaneously. You’ll need the help of your fellow worms to advance as you open gates for one another. However, each level is being scored so you’re also battling it out to see who can tally the most points.

From a technical standpoint, Earthworm Jim HD is a great remake: new levels and a multiplayer have been added, and the graphics have never looked better. However, the controls haven’t aged well, and the lack of direction could dissuade some. Fans of the series should consider this a no brainer, but others would be advised to give the trial version a look before taking the 800-point (US$10) plunge.